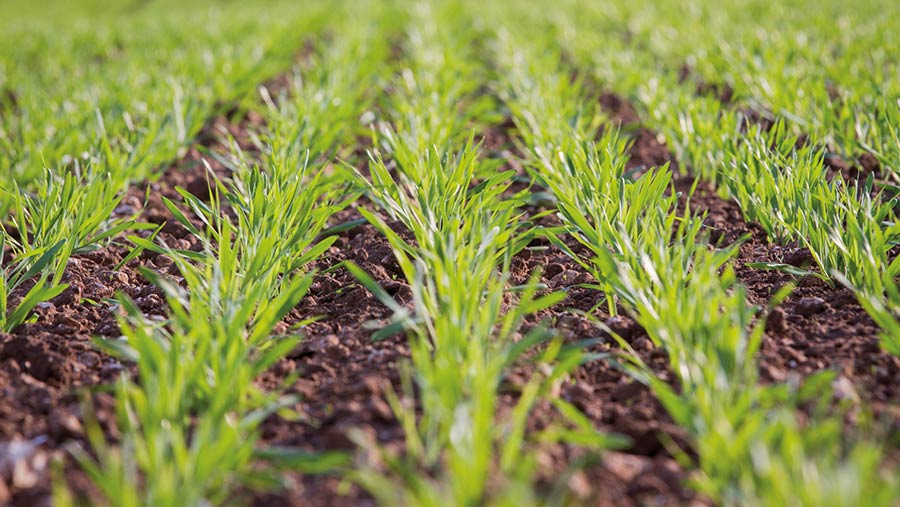 The latest observations from our Crop Watch agronomists reveal that winter barley crops have benefitted from the mild autumn with, but disease has also prospered with net blotch and mildew present.

The high blackgrass dormancy this year is prompting top-up sprays of residual herbicides and oilseed rape crops are also looking forward and larval activity is being seen with thoughts on how this will develop.

Find out the detail for your area below.

Favourable weather conditions this autumn, relative to the past two years, have allowed a significant area of winter cereals to be established.

And with warm, moist soils, crops have emerged rapidly, keeping sprayer operators busy, to ensure the all-important pre-emergence herbicides have been applied in good time.

Early-applied residual sprays appear to be taking effect, helped by the quality of seed-beds and available moisture.

However, given the high blackgrass dormancy this year and the variable efficacy now afforded by contact herbicides against many grassweed populations, top-up residual sprays are being written up and are likely to include active ingredients that offer some contact activity, for example prosulfocarb or picolinafen.

Data indicate that approximately 20% of the aphids being caught in suction traps are carrying barley yellow dwarf virus (BYDV).

Generally, it is the second-generation offspring of the original winged colonisers that are the primary concern, and very approximately this begins when 170 day degrees above a threshold of 3C is reached.

In early-drilled crops, this threshold has now been reached, so crops are being monitored closely.

The weather over the next few weeks will have a significant influence on aphid reproduction and ultimately the BYDV risk.

Winter barley is tillering quickly and is showing mildew and net blotch lesions. Normally winter frosts will help suppress mildew, but the net blotch will be worth monitoring in early spring.

With autumn cereal drilling reaching completion and given the present high fertiliser prices, if you have yet to commit to full fertiliser requirements, it would be worth investigating the break-even ratios to help guide quantities.

Early-drilled forward crops look to be requiring a plant growth regulator, however, in areas where cabbage stem flea beetle (CSFB) pressure is high, larval activity is already beginning to become apparent and with current mild conditions this could prolong egg hatching.

To help the plant combat the damage and winter conditions, it would be advisable to hold off from applying any form of PGR until the spring and early stem extension.

This will help gauge the crops’ response to the larval pressure moving into the spring.

Disease levels remain low, with phoma yet to reach threshold, however, recent weather will certainly create an increased risk. This will also be true of light leaf spot, particularly in earlier drilled crops.

At present temperatures remain too high for propyzamide applications.

Wait until at least 10C soil temperatures and if blackgrass or rye grass is well established, then leave until 6C ideally, as this gives the blackgrass more time to take up sufficient propyzamide.

By delaying, the colder weather should also help to open the larger canopies, allowing for better ground coverage.

When we look back on the autumn drilling season of 2021, I will reflect on it having been very successful.

We have had a series of difficult autumns in recent years and the outcomes not always pleasant, so having a kind one is very welcome.

Sadly, as in Eastern philosophy, to every Ying there is a Yang and the price of nitrogen is our Yang.

It’s like a Hammer horror film, with farmers screaming as the weekly price hike bares its fangs.

This has had some effect on drilling and the enthusiasm to drill every acre with winter wheat has waned.

The consequence of this is some second wheats will be spring alternatives.

While this makes good social media headlines, the reality is that the total areas drilled of the main crops will not have major changes.

Winter wheat crops have established well and the combinations of pre-, peri- and post-emergence sprays appear to be working well.

Volunteer beans and OSR are an issue, but unless they are a plague, I would leave these for treatment in the spring.

Later drilled crops have certainly had more of a battle, with slugs proving particularly troublesome.

I have had huge dilemmas with the risk of aphids and the potential spread of BYDV. I regard crops drilled in early to mid-September as at high risk.

The reason for this is based on high catch levels in the suction traps. But I must then balance this against the low risk of virus we have in the North of England.

I have scouted hundreds of acres and struggle to find any aphids, so what do we do?

As with so many decisions we make, it is a compromise of risk and reward, so some I recommend treating.

When I compare this to earlier in my career, when there was very little concern made for the need or effectiveness, but deemed essential, I feel we have moved on for the benefit of all. 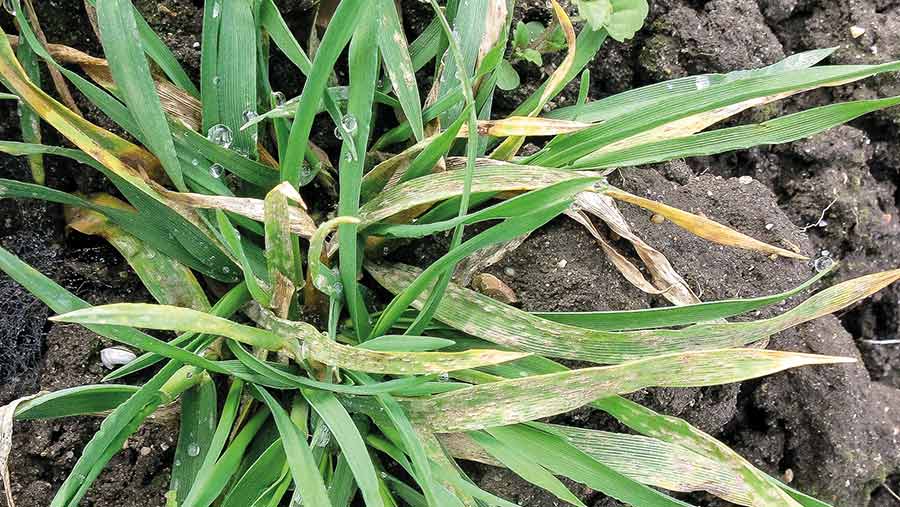 Winter barley crops have loved the mild and open autumn and have both significant tillers and disease.

Mildew and net blotch are the most significant disease, and although easy to see, I will not be rushing to treat them.

Hopefully, a dose of less favourable weather will restore order and we can defer treatment to the spring.

To date brome has been my most difficult weed in barley, and sadly we have had to redrill one crop.

Winter barley is a bit of a Cinderella of a crop, as in gross margin terms it is a challenge.

The reality is that the early start to combining spreads workloads and provides an opportunity for rotational diversity.

But it is the profitability of the rotation over several seasons which must be assessed.

Oilseed rape crops are resplendent, and the main disease present is mildew, which I will not be treating as again hoping the weather will be our friend.

I have now closed the door on a fungicide, as I firmly believe any disease that arrives now will either have no yield impact or will be better treated on new growth in the spring.

I will not dwell on the ground temperature and suitable timings for propyzamide, but will just say get spraying.

Winter beans are now drilled, and herbicides applied, as fortunately most propyzamide arrived, and I am pleased to shut the gate on these.

As we enter the final furlong of autumn I have decided that I am a pessimist.

Having had such a good start to the 2021/22 campaign, I can’t help wonder what Mother Nature might have in store for us in 2022?

Since I wrote last, all the maize has been harvested, thankfully, with very little damage done to the soil and only a small amount of mud on the roads.

Drilling behind the maize in most situations has been done, although a few got caught as the contractors were busy harvesting and didn’t have the team to go drilling.

There is an acreage of maize to be cut for crimping this year and I would think this will be cut in the next couple of weeks.

I have one field that was undersown with grass and it will be interesting to see how it holds the combine up and prevents soil erosion following harvest.

It is on a slope with the only gate at the bottom of the slope leading onto a road. The undersowing and combining will, hopefully, eliminate run-off.

Most of the early-drilled cereals look good and have now received their herbicide, aphicide and trace element sprays.

With the heavy recent rains I now doubt whether we will be able to travel on any cereals unless we have a prolonged dry spell.

This will leave a considerable acreage unsprayed. This may be a year when we really see the effect of no Deter (clothianidin) seed dressing, as aphids are clearly visible in crops.

Having said that, they may have drowned in last weekend’s rain! We can only hope.

The autumn grass reseeds have taken their time in establishing. I think the dry weather in September slowed them up, but in general  they now all look good. There is plenty of weed coming in some, but they are unlikely to be sprayed.

This is where we resort to regenerative agriculture or in layman’s terms, sheep.

It amazes me that we are really only turning the clock back 30 years to good sustainable rotations (winter, spring, grass and stubble crops) and what my geography teacher (a long time ago) referred to as ‘the golden hoof’ (livestock).

In fairness, most farms in the South West never went away from it.

With fertiliser prices soaring and making it almost uneconomical for livestock farmers to justify, I can only encourage everyone to analyse their muck and slurry and make sure soil testing of their fields is up to date, to make the best use next spring of all the available nutrients produced on the farm.

With the last of the potatoes being lifted, it’s now time for wheat to go in behind them, as well as spring brassicas having their final application of fungicides to keep them clean over the winter.

All the wheat crops are almost drilled and despite wet conditions have gone into good seed-beds.

Some early-drilled crops are at two to three leaves and have either had their barley yellow dwarf virus (BYDV) spray or are fast approaching it.

With temperatures still relatively warm, I have been using the BYDV app to optimise timings – in some cases adding a follow-up herbicide.

With BYDV insecticides it is a good idea to know the pH of the spray water. If the pH is over 7 it can lead to alkaline hydrolysis which will reduce the activity of the active ingredient, reducing the efficacy of the treatment.

To minimise this, the addition of a water conditioner to the tank before the pesticide is put in will lower the water pH and improve the effectiveness of the insecticide.

Oilseed crops planted in the first few weeks of August are starting to fill out and cover the ground, with most crops mainly at 7-9 true leaves.

These have survived the onslaught of cabbage stem flea beetle and are looking promising going into the winter. Longer term grassweed control is now the priority, using either propyzamide or carbetamide depending on the situation and product availability.

Given the increasing problem with grassweed resistance, a high level of control in the break crop is essential.

Also, remember with winter beans going in, if you want to apply a propyzamide product it will need to be applied within seven days of drilling before crop emergence, unlike OSR.

Ideally, neither active should be applied until the soil temperature is below 10C at 30cm and is falling.

This is key to ensuring maximum persistence of the active and control of the grassweed into the spring. We normally apply from mid-November here in the South.

The Corteva app can help if you don’t have access to a weather station or a soil thermometer.

Where broad-leaved weeds such as poppies, mayweed and cleavers are the issue, consider adding Belkar (halauxifen + picloram) to the mix in your OSR crops.

I would normally have expected to see some signs of phoma in OSR by now, but perhaps because we had a relatively dry September, it has yet to show itself.

It will probably start to express symptoms after the recent wet, mild period so I will keep checking and add a fungicide to the herbicide mix if crops reach threshold.