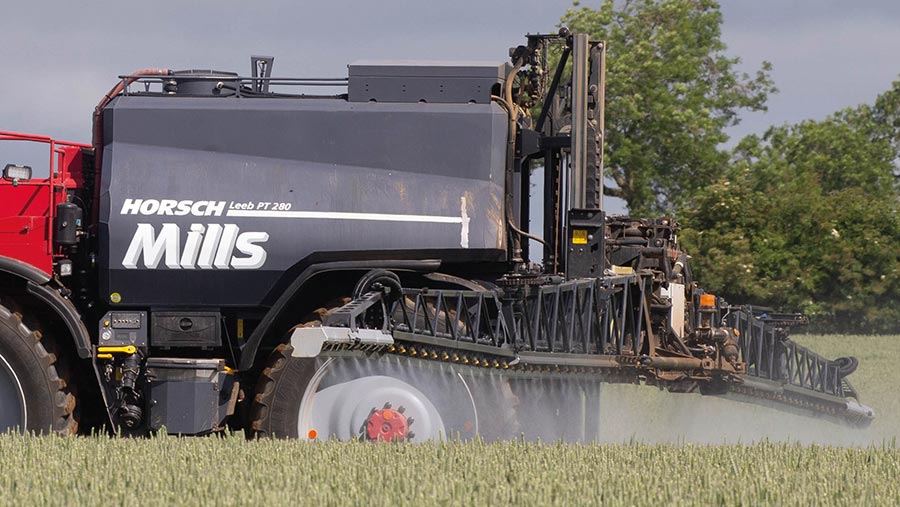 With T2 sprays largely complete in wheat, thoughts are turning to ear sprays and the fusarium ear blight risk. The T3 is also an opportunity to top up on control of rusts and septoria according to risk.

This season will be remembered for the flush of late-emerging grass and broad-leaved weeds in crops. Strategies are already being drawn up to tackle this threat after harvest in following crops.

Since I wrote last we have had 225mm of rain, followed by a warm dry spell. The rain certainly saved some of the cereal crops, but it didn’t do much to help the maize that had been drilled.

The winter barleys have now all had their last spray and look OK, although I think they are too thin, having lost tillers in that prolonged dry cold spell in March/April. Only the combine will tell, but I think we will be disappointed.

Winter wheats have changed dramatically and there are some extremely good fields, although most I would only call average. They have been generally clean and will now only need an ear wash, this will be Zephyr (prothioconazole + trifloxystrobin).

Spring barleys are looking good and have had a fungicide, plant growth regulator and broad-leaved weed herbicide and trace element applied. They are racing through the growth stages so will need to be watched to make sure no disease appears.

Another crop that has a massive drilling window is maize, with some crops drilled in the middle of April and some crops still being drilled the first week of June.

The early-drilled crops have taken five weeks to come up, whereas those drilled in late May/early June have only taken five days. It will be interesting to see how they perform as I think the later-drilled crops won’t be that far behind the early drilled.

Weed control has been interesting in maize, as the weeds have come with a vengeance and in places the maize was struggling to get going, with a carpet of weeds across the field and with yellow, stressed maize just poking through.

Holding your nerve to allow the maize to green up before spraying is stressful. Mother Nature has helped with some warm days to get the maize going.

I have been using a combination of nicosulfuron + mesatrione + pyridate in varying amounts. I have barnyard grass to deal with on the majority of fields that I look at, so the nicosulfuron is needed.

The dry settled weather has also allowed the contractors to be right up to date with spraying, so most fields are being sprayed as we need them done – long may this last.

It’s amazing how quickly the silage is cut nowadays, with most people now having done theirs. The yields of grass have been exceptional and, thankfully, the quality has not been affected too much by the delay in harvest.

With only a few seed heads showing, that prolonged cold, dry spell did some good early on.

We are now at the business end of the growing season in the South. We have adequate soil moisture, warm air temperatures and bright sunshine – crops are really cooking with gas.

Oilseed rape crops have now been flowering for at least two months and continue to compensate from early-season cabbage stem flea beetle and frost pressure. This will no doubt give committed OSR growers a degree of confidence for the coming season, especially given crop values and a lack of alternative break crops.

Winter wheat crops have received timely T2 fungicide applications over the past two weeks and now look full of potential.

However, looking forward, there is still a very significant threat of rust, septoria and fusarium infections breaking out. Regard needs to be given to this potential threat when planning T3 applications.

Severe fusarium ear blight may occur, with white or pink fungal growths being spread in all directions by water soaking. Mycotoxins produced by cereal fusarium species can adversely affect the marketability of wheat.

Chemical control of fusarium ear blight can be inconsistent. However, a well-timed T3 application of a 75% dose rate of an azole compound remains the best way to mitigate this threat, while also providing a useful top-up control of rusts and septoria.

I can’t recall a spring where I have seen so much late grass and broad-leaved weed emergence.  Early spring-applied graminicides have been less effective, due to cold, dry weather and unresponsive weed growth.

Rains in May – and a surge in temperatures – have also flushed many weeds through cracks in the soil. So we are already planning ahead, when a combination of rotation, cultivation and pre-emergence herbicides will be deployed to tackle this never-ending battle.

This year certainly feels as though we have been running in the Grand National, with large hurdles to jump from the start. Although we can see the finishing line looming, there are plenty of pitfalls still to come.

Sadly, the joy of watching the crops race through growth stages is soon over as all the detritus in the fields also comes to the party.

Blackgrass, ryegrass, charlock and, my bete noir, poppies all start to show. This great show of biodiversity maybe appreciated by Mr Packham et al, but sadly not me.

The cold dry spring has tested the efficacy of all herbicides and my conclusion is that poor uptake due to the cool weather, combined with open canopies, has enabled the weeds to survive. I am not subscribing to the mass-resistance theory, however, I do see it as a direction of travel.

Winter barley crops have now received their last fungicides and the gate is shut until harvest. Spring barleys, on the other hand, are now at or approaching flag leaf emerged and look full of potential.

Many will receive a late growth regulator to help minimise brackling and although disease levels are low, a reduced-rate fungicide will be applied to see the crop through.

The oilseed rape crops have undergone the longest flowering period I can remember. Sclerotinia is a mythical beast. Those that have experienced the disease are haunted and religiously spray, while those who have not done so battle with their inner demons over timings and justification.

Most crops receive one fungicide in flowering, but in a year like this, with crop prices high, the big discussion has been “do I spray again?” If the grower sprayed early in flowering, then I could see a justification for a second spray, particularly if this is based around a strobilurin.

For a change, the weather co-operated with T2 timing on wheat and amazing though it is, all were applied nearly on time. Disease remains low, however, but looking at untreated trial plots last week, I could see yellow rust and septoria on leaf two, giving me some solace in what we have sprayed.

Wheats have really changed, growing rapidly and looking amazing. The view at 55mph from the road is more flattering than walking through them.

The wet winter, followed by a dry early spring, has certainly reduced the number of tillers. Although this is not critical for wheat, I feel that this will pinch a little potential.

T3 fungicides in wheat brings much discussion and certainly in the North it is very important. If people are targeting fusarium, then the optimum timing is the start of flowering which will only be 10-14 days after T2.

I think for most growers, the main reason for T3 is to top up overall disease control and as such 21-25 days after T2 will be a better target.

Winter beans are now well into flowering and have received their first fungicide. As pods start to set, we have a discussion over bruchid beetles and their control. This, thankfully, is now a very brief conversation as we accept that the chemistry available is – at best – poor and the damage to predators is likely to be more negative.

Spring bean flower buds are now visible and no further weed control is planned. In general rust is more of an issue in spring beans and a azoxystrobilurin/tebuconazole mix will be applied later.

Winter oats are now at flag leaf and looking well with little disease. The arrival of Zypar (florasulam + halauxifen) into the herbicide range has certainly helped improve weed control.

Unfortunately, this improvement will still not prevent a rich red pallet of colours for the holidaymakers traveling to Scarborough! 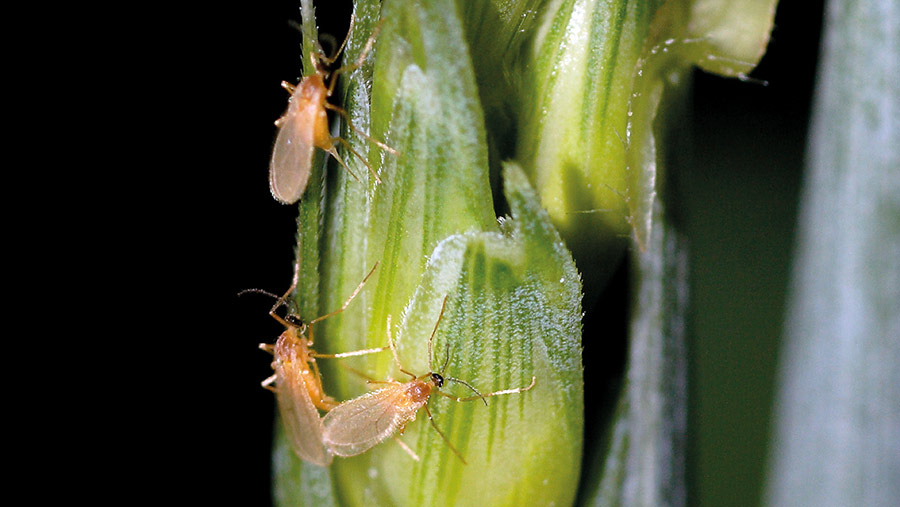 What a difference the last few weeks have made to crop potential this year. Following a dry, cold April, all crops have responded to rainfall and a rise in temperatures, allowing access and utilisation of early-applied nitrogen, promoting tiller retention and general improvement on crop health and vigour.

Rust pressure has increased with the warm spell and the focus will be towards holding this with an azole and strobilurins. Orange wheat blossom midges are beginning to be recorded at low levels.

While the availability of wheat varieties resistant to orange wheat blossom midge has helped negate the risk, there remains some significant UK wheat varieties that don’t, such as Zyatt, Crusoe, Siskin, Extase and Graham, which will all require monitoring until the crop reaches full flowering.

Winter oilseed rape is beginning to reach final petal fall, although many crops continue to demonstrate a protracted flowering period this year. Sclerotinia levels are dropping, however do continue to monitor crop closely, particularly if the interval for the first sclerotinia spray is stretched.

While dry weather will suppress sclerotia spore germination, there will still be a higher humidity within the crop canopy. Desiccation could be awkward on uneven flowering crops, which could make pod sealant applications important and more likely to be applied prior to glyphosate.

Beans are beginning to show high chocolate spot disease pressure and have required early kick-back treatment to keep this held. If pressure continues, high rates of Signum (boscalid + pyraclostrobin) will be required as a follow up.

With warmer temperatures comes increased pest pressures, with pea aphids being found within peas and sugar beet aphids are reaching thresholds. Peach potato aphid has, fortunately, occurred much later in the season due to the cold April/May.

Teppeki (flonicamid) has been used first to help protect some of the beneficials within the crop. With its recent emergency approval, follow-up treatments of Insyst (acetamiprid) will occur once threshold is reached (one wingless aphid per four beet plants).

This will also give incidental control of leaf minor and flea beetle. With current high temperatures this should help the beet reach its resistant stage of 12 true leaves.