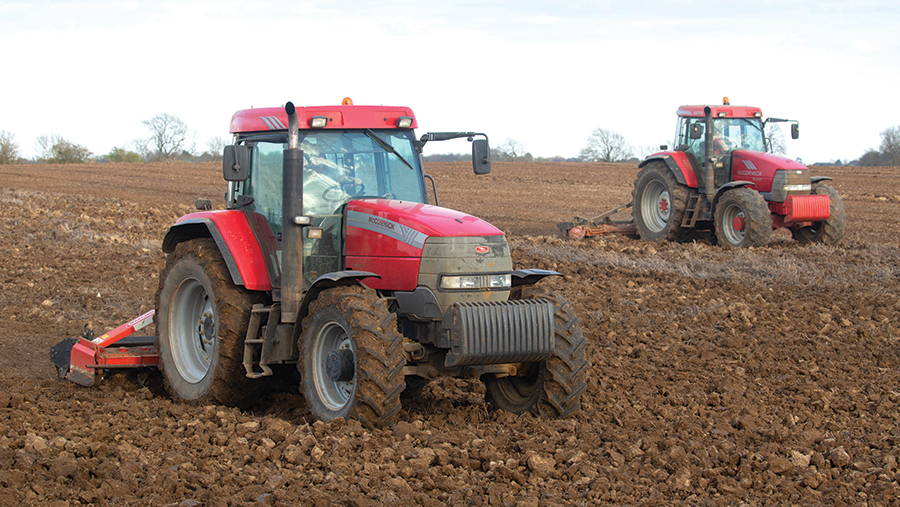 The change in weather means spring drilling is well under way and crops are largely going into better seed-beds than could have been hoped for just a couple of weeks ago. However, heavier land has been more difficult to work down into good seed-beds, especially those that had dried out and gone cobbley.

Weedy winter cereals crops have received their tidy-up herbicide sprays, although some winter barleys may need a top-up spray to tackle broad-leaved weeds.

For beet growers, the key challenge in the coming weeks is to get crops to rapidly reach the 12 leaf stage, to help with the anticipated virus yellows attack.

It is impossible to pretend everything is normal when the country is in coronavirus lockdown, but farming goes on. It is a great relief that the soils have dried, spring sowing is well under way, and fertiliser and spray applications are pretty much up to date now.

Those of us fortunate enough not to have first-hand experience of Covid-19 can enjoy the quiet roads and feel lucky to have to make few adjustments to our normal routines.

A lot of autumn-sown crops have come out of winter in good condition, if somewhat weedy. There are plenty of options for wheat, and I have used different products in different locations depending on the main target species. In many cases a follow-up will be needed, particularly for cleavers, fumitory and groundsel.

Barley weeds
The barleys have also had a tidy-up, but may need a top-up for broad-leaved weeds. Up until now conditions have been very cold, so a cautious approach with herbicides has been necessary.

Forward wheats have just had their T0 fungicide plus some chlormequat. While the dry March weather has kept septoria at bay, I have been finding yellow rust in occasional crops in East Lothian – not necessarily in particularly susceptible varieties, either.

Tebuconazole is the backbone of this year’s T0, and the chlorothalonil supplies are aimed at T1 and T2 in most cases.

My winter barley fungicide programme is a simple one – Siltra XPro (bixafen + prothioconazole) twice, with chlorothalonil in the second application to counter ramularia.

The wheat programmes may be more diverse as I am keen to try out Revystar (fluxapyroxad + mefentrifluconazole) somewhere.

For the most part, my spring crops will not get a pre-emergence herbicide unless we have specific problems to address, such as persistent annual meadow grass, or rat’s tail fescue. It is ironic that these may not work very well as the soils are now so dry.

Oilseed rape crops are at last beginning to extend upwards and will be at yellow bud in no time.

So far, so good. Filling in IACS forms without a face-to-face chat will no doubt be a bit of a challenge, but as long as the internet can take the strain, we will manage.

Recent dry and cold weather has allowed growers to catch up with spring drilling. However, seed-beds have been difficult to create especially on heavy land where they are left dry and cobbley.

The forecast does not show the rain needed for spring crops, but does promise warmer weather which will encourage growth of the autumn-sown cereals, as they move into stem extension.

In wheat the recent, cold dry weather has temporarily slowed disease development, but septoria and yellow rust are easily found on the older leaves of susceptible varieties. On autumn sown crops a well-timed T0 fungicide (growth stage 30; ear at 1cm) will be important, especially for rust control.

Late-drilled crops not receiving a T0 should be monitored carefully for rusts and mildew and treated prior to the T1 fungicide timing (leaf 3 50-75% emerged) if necessary.

Winter barleys at early stem extension are also receiving early fungicides and plant growth regulators. Spring herbicide control in barley should be completed before the crop meets in the row and shades the target weeds.

Despite patience, beet drilling has also been a challenge. Heavy land seed-beds are not as good as growers would like and now we wait to see how evenly these crops emerge. This is particularly concerning as the virus yellows forecast predicts an early flight of aphids and high virus levels in untreated crops.

Beet establishment
Remember we need the beet to establish quickly because the plant’s resistance to virus infection builds steadily during early growth reaching an ability to effectively reduce this risk around the 12 leaf stage.

Many rapeseeds continue to grow slowly, this is often due to a combination of factors including cabbage stem flea beetle larvae, pigeon damage, poor soil structure and wet ground. Unless flea beetle infestation is severe, growth should improve as temperatures warm and plants utilise the applied nitrogen.

When temperatures reach about 15C, pollen beetle will migrate into the rapeseed. Small backwards crops will be vulnerable for a longer period, but it is important to check AHDB thresholds before treating crops.

Where required, choices for pollen beetle control are limited and relatively expensive. They include thiacloprid (such as Biscaya) and indoxacarb (such as Rumo). Check individual labels for the latest timing of applications.

In winter bean crops, make a final check for broad-leaved weeds as any herbicide applications must be completed before flower buds are visible.

By the time this article is published, I suspect most of my spring combinable crops will have been planted, generally into pretty good seed-beds, which is amazing considering how soils looked four-to-six weeks ago.

It is remarkable how fields can dry out given a run of dry weather and lengthening days. Although seed-beds have come down well in the majority of cereals, I will wait until early post emergence before deploying any herbicide.

This will ensure crops emerge OK and (not sure I can believe I’m saying this) some moisture would be beneficial. Spring beans and linseed will get pre-emergence, as they have limited options post emergence.

Autumn crops are hugely variable. We have managed to get fertiliser on them in the past couple of weeks to help them fill out, as many of them really need to tiller out. To ensure nothing is limiting, many of these crops recently received a trace elements blend.

Due to late drilling and the backward nature of most wheat and barley crops, they will not be requiring a T0.

The few early September-drilled wheat crops have plenty of septoria on lower leaves, but I’ve not found any yellow rust, as reported in other areas of the country. These crops will get a T0 based on chlorothalonil of which we have plenty on farm.

Unlike many areas, we have some reasonable oilseed rape crops although they were desperate for the fertiliser, which hs been applied in the past few weeks. They have rapidly moved into flowering despite the recent cold weather.

The better crops have had some fungicide with plant growth regulator, mainly to try to increase branching and reduce the main raceme dominance that was evident.

Fungicide at this stage will protect against sclerotinia at early flowering to allow for the normal mid-flowering spray, although with the current weather pattern, risk is looking low so spend will be tailored accordingly.

The extraordinary change to our lives caused by the coronavirus control strategy is having massive effects on many people, families and businesses. I’m sure we are all having to adapt our lives and even our relationships in these trying times.

Perhaps one positive result of this terrible situation will be that there will be more appreciation and value of locally supplied produce, which will benefit British farmers. 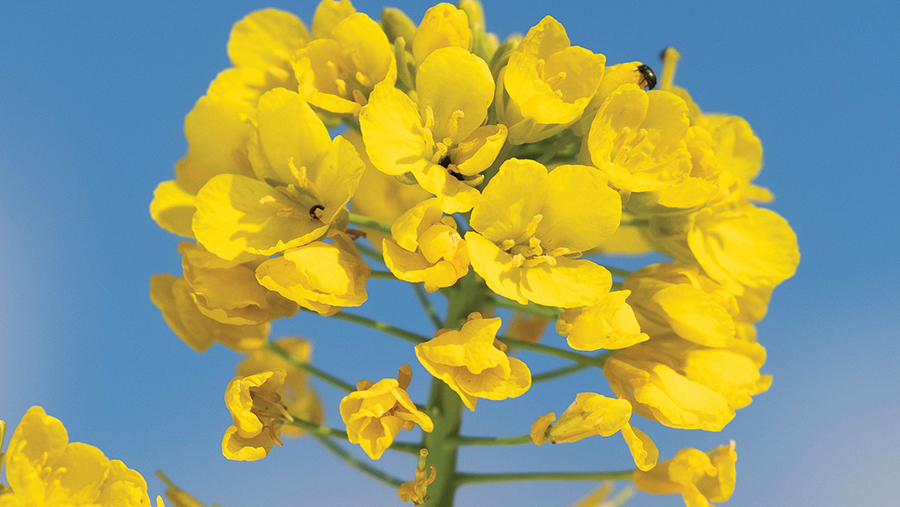 Spring on the Downs has a slightly surreal feel, not least because of current events at home and around the world. The heavier soils, now drilled to spring crops, went from being unable to travel on to bone dry seed-beds in a matter of days.

One consolation is the quality of the seed-beds are generally very good. The hope is we will get just enough rain to help any pre-emergence herbicides work well.

The few well established early sown crops of winter wheat are now at growth stage 30 and a T0 plant growth regulator/nutrition/fungicide application is being applied.

However, for most winter cereals they are sat in areas of very hard, tight soil and under considerable stress from previous waterlogging.

The variability between growth stage within fields is going to make achieving optimum timing of fungicide and PGR’s initially a challenge.

Just like the crop, blackgrass also appears stressed, although recovering more quickly than the cereals and receiving the remaining applications of mesosulfuron + iodosulfuron. Generally, brome seems less of an issue this year, so far at least.

Oilseed rape is all over the place, in terms of growth stages. Pollen beetle are at low levels in the cooler temperatures of previous weeks, but will increase in numbers in the recent warmer temperatures of last weekend and will be another issue for some of the more backward crops.

Flowering crops will soon be at potential risk from sclerotinia, but under present conditions the risk remains low. Light leaf spot has been active in many crops and has been factored into earlier fungicide choice.

It is pleasing to see some of the very late-sown winter crops are beginning to look visually promising. Equally some spring sown winter beans are now looking well, with no sign of any leaf notching yet, although that is likely to change after this weekend’s temperatures.

A challenging spring such as the one we are experiencing has certainly highlighted the value of a cover crop’s ability to improve the establishment of the following crop.

Cover crops have shielded the soil surface from a constant battering over the winter by incessant rain. Side by side comparisons of bare soil versus soil with cover this spring has shown the improved friability and moisture retention of protected soils.