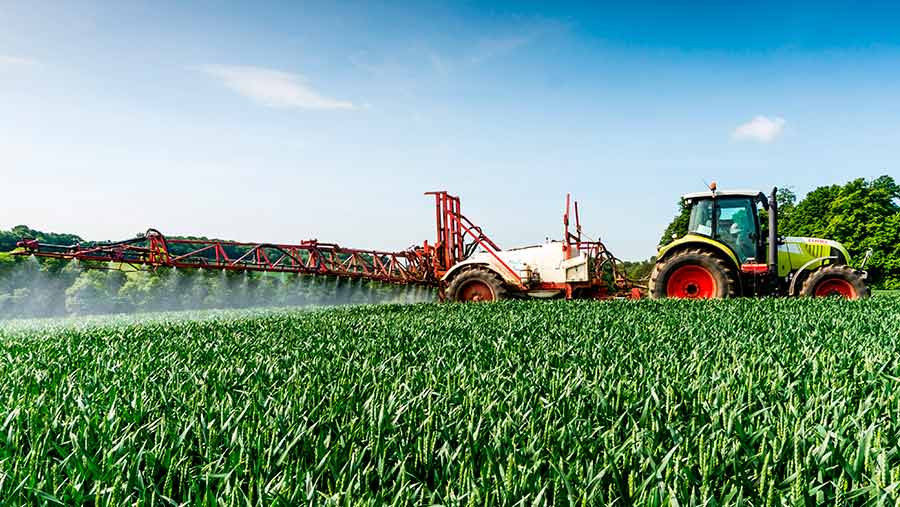 A warmer than average May has seen crops motor through their growth stages and help reduce disease pressure north of the border.

Even after a strange spring, there are still some surprises being seen in crops, the most notable is higher levels of loose smut appearing in barley ears.

It is affecting a range of crops, including those that had a seed treatment, and agronomists suggest further investigations are needed to reveal the causes.

The warm dry weather of the past four weeks has kept disease at bay in Scotland.

Our most troublesome diseases are those that like the wet, and this season there is a marked lack of septoria in wheat, which is a joy for all concerned.

Most crops are at or near ear emergence this week which is not far off the norm. I have tried some Elatus Era (benzovindiflupyr + prothioconazole) this year, but there may not be much pressure on it to compare with other T2 products – we will see what the rest of the season brings.

Having skipped T0 without ill effect, I am not planning to omit any further treatments, and the risk of heavy localised showers means a degree of septoria protection has to be maintained at T3. However, I may tinker slightly with the rates and not go over the top.

Winter barley and oilseed rape are suddenly round the corner and into grain- and pod-fill. The oilseed rape had a dry flowering period and with virtually all petals off, the disease risk is lower here too.

It is a difficult crop to predict – crops look great this season, but appearances can often be deceptive. There seem to be plenty of pods, the question is how many seeds will they hold?

Spring barleys have motored on undeterred since sowing. They have tillered out well, and again the usual rhynchosporium and mildew challenges have not materialised so far.

I have one or two crops earmarked for a single spray fungicide strategy, while the less marginal ones will have a restrained T1 and a Siltra (bixafen + prothioconazole) plus chlorothalonil.

“Motor in May” has never been truer than this season with all crops rushing through their growth stages in a warmer than average May.

As always nature has a phenomenal ability of making up for lost time to ensure crops are flowering around the time of the summer solstice.

At present, with ears emerging on forward crops, disease control looks to be holding up but, with recent heavy rain from thunderstorms, it is too early to assess septoria control strategies as this will not really be revealed until the third week in June at the earliest.

My T3 spend will be modest as it is difficult to justify a large spend for ear disease when you can only expect moderate control and the timing is difficult to get right, especially if we have showers around flowering.

Winter barley crops romped through later growth stages making late plant growth regulator applications difficult to achieve, but they are generally are shorter than normal, which I hope will mean they will stand although the recent thunderstorms and heavy rainfall are testing them.

Disease control so far is good with chlorothalonil added in at T2 for ramularia control. On hybrid varieties, fluxapyroxad was used to try to reduce risk of brackling.

As has been reported in the press, I have noticed some loose smut infected ears in some barley crops it will be interesting to understand if this is the start of this disease getting through fungicidal seed treatment.

Oilseed crops are almost impossible to assess for yield potential and I have not seen the significant pod abortion reported in some crops elsewhere. Flowering period was short which I predicted in my last blog and very interesting to read this may be linked to higher yield so we are hopeful.

Spring cereals that have only been in the ground about four weeks have really started to move and are heading into stem extension. The recent rainfall was welcome to help keep them growing.

Contact weed-control plans will be made shortly, once we have seen what weed germination has been stimulated by the rains.

Spring beans are similarly motoring away escaping the weevil attack with some grassweed emerging this will receive a graminicide shortly.

Winter wheat ears have emerged and are flowering. Orange wheat blossom midge (OWBM) populations have been high in some locations while, in other areas, populations have remained below threshold.

It is a relief most crops are beyond the susceptible stage from ear emergence to flowering.

T3 fungicide applications are planned this week to protect crops from fusarium infections during flowering and to top up foliar disease control.

Disease in the top of the canopy has been well controlled, although differences in septoria levels on the bottom leaves are becoming apparent between varieties.

During grain fill, we hope for moderate temperatures to compliment recent rains to maximise yield potential.

For milling wheat’s, high yield potential will increase the need for a top up of foliar nitrogen to achieve quality specifications, this can be applied until milky ripe.

Aphids pressure is increasing in peas. For all insecticides check product labels for timing of application, maximum number of treatments and total permitted dose per crop.

Sugar beet crops are growing well and weed-control strategies have worked well. Monitor crops and if necessary be ready to apply a final herbicide treatment before row closure, especially where recent showers have encouraged another flush of weeds.

Many of you will be visiting trials demonstrations during the next month. I encourage you to participate in these events; discuss your challenges and seek solutions.

You will find your neighbour is facing the same issues. All growers are battling blackgrass at some level. Remember, the foundation of control starts with good soil management and rotation.

Some spectacular storms over the Downs have been followed by variable amounts of rain, ranging from none, to up to 40mm in places.

We have, however, escaped the flooding others have experienced.

Crops have stood well with no obvious lodging anywhere.

The recent rain and rising temperatures have all contributed to rapid crop development as well as increased disease risk.

Wheat T2 fungicides have nearly all been applied, and with crops moving quickly into full ear emergence, a T3 fungicide consisting of tebuconazole + prothiconazole, will follow shortly. Crops with a high yield potential will also receive a partner strobilurin (pyraclostrobin).

At ear emergence, the risk of OWBM is higher than normal this season.

While some are only just receiving a T1 fungicide/plant growth regulator, others are close to receiving their T2, with late drilled crops just beginning stem extension.

Brown rust can be found in untreated susceptible varieties, as can mildew, with the recent rise in temperatures, and high humidity.

Mildew can be easily found in later-sown crops, as they grow quickly. This makes a two-spray fungicide programme essential on spring barley with good yield potential, irrespective of drill date.

A slight change in colour in some winter barley crops suggests the onset of ripening on the most advanced crops.

Levels of loose smut seem much higher than normal this year, and this will require further investigation, to understand the possible causes.

Diseased ears have occurred in a range of conventional, and hybrid varieties, and within different seed treatments.

Conditions have been perfect for aphids, and a close eye is being kept on late-sown spring cereals, where barley yellow dwarf virus could still be a risk, as well as for gout fly eggs on spring wheat and barley.

I’ve yet to find any downy mildew in spring bean crops, but most crops have received at least one fungicide for chocolate spot control on winter crops.

Conditions are perfect for bruchid beetle, so a well-timed insecticide will be needed where quality is being targeted.