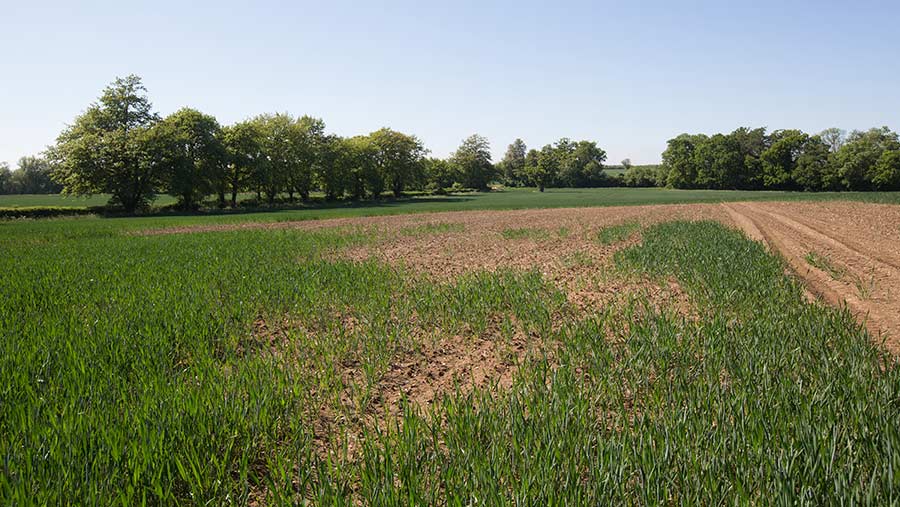 The extremely challenging season continues and the recent rains have resulted in the expected flush of weeds, aided by dry soils cracking  which is enabling seed to germinate at depth. Dry conditions are also limiting the efficacy of residual herbicides.

This lack of residual herbicide activity is having an impact on bean growers, with only one post-emergence option for broad-leaved weed control.

On the disease front, septoria remains a risk in wheat, although the bigger challenge in the coming days is the 20 May cut-off for using chlorothalonil. Not only is this the loss of a vital product, it also leaves growers with a much-reduced winter cereal area and significant unused stocks of the fungicide.

With not a lot of chemical weed control included in the winter wheat T1 fungicide spray, tank mixing of herbicides at T2 will be more prevalent this season where crop canopies allow penetration to the weed.

Although T1 fungicides may have only recently been applied, the temptation to delay the T2 timing to allow the boots to split and get some active ingredient on to the emerging ear should be avoided. The flag leaf and leaf 2 contribute to more than 60% of yield, and to leave these unprotected is a big gamble.

Septoria is present on some lower leaves, and the wetter, warmer weather will have accelerated its progress up the plant towards the upper, unprotected canopy.

Fluxapyroxad or benzovindiflupyr will form the base of the T2 fungicide mix, and will be tailored to individual varieties depending on their ratings for septoria and rusts.

Where stock exists on farm, chlorothalonil will be added to the mix to protect against septoria, keeping in mind the 20 May cut-off for this active ingredient.

Herbicide cut-off
Growth stage cut-off timings for herbicides should also be observed when adding them to the mix. Prothioconazole will feature on milling varieties to start fusarium control.

Sugar beet crops are at differing stages in the region, mainly driven by seed-bed moisture at drilling.

In places, where land had to be worked late on to produce a fine seed-bed suitable for beet, valuable moisture was lost and seed ended up sitting in dry seed-beds until the recent rains. This has left some fields with growth stages varying from cotyledon to six true leaves.

Weed emergence has been as protracted, and with hot daytime temperatures last week, and now cold nights as well as thresholds for aphids having now been met in a large number of fields, sequencing an insecticide in with herbicide timings and intervals has been tricky, to say the least.

Arable Alliance (Yorkshire)
The prolonged dry weather continues to cause a lot of stress – among crops, growers and advisers.

A splash of rain in early May, ranging from 4mm to 10mm typically, gave a few hours of hope, as there was just enough to finally wash in the fertiliser.

Reality soon returned, though, with many spring crops looking thin and patchy and some winter oilseed rape crops seemingly disappearing on heavier land.

The season of extreme wet followed by extreme dry is certainly taking its toll. Seeking positives is difficult this year. However, one positive is that the dry weather has, so far, kept disease pressure low for important pathogens such as septoria tritici, mildew and rhynchosporium.

In winter wheat the flag leaves are emerging so attention is now focused on the T2 fungicide timing. There is the temptation to cut back on fungicide input at this time due to conditions being so dry.

This could well prove to be false economy, though, as the T2 fungicide looks to protect the top two leaves in the canopy which together contribute 60-70% of final yield.

Also, rain will return at some point, so late-season disease pressure could still increase, meaning protecting these top leaves is crucial.

Thankfully there will be little requirement for large eradicant activity from the T2 timing for septoria tritici control, so fungicides with good protectant qualities will be the main focus.

Yellow rust pressure has been high this year with T0 and T1 fungicide choices targeting this disease. These earlier fungicides have worked well and any spray misses in fields have now turned yellow.

Maintaining protection against yellow rust at the T2 timing will be a key consideration with product selection this year.

Winter barley
Awns are emerging on winter barley and T2 fungicides are currently being applied. With little rain since the T1 timing, new crop growth has remained relatively clean, with the T2 fungicide protecting against late season disease pressure such as brown rust.

Unfortunately, the wet winter and dry spring has not helped tiller development, with ear numbers lower than ideal.

With barley less able to compensate for lower ear numbers compared with wheat, this is another sign of reduced yield potential. Crops which are thick and competitive remain few and far between.

The earliest spring barley crops are now at early stem extension and T1 fungicides are being applied. Like their winter counterpart, crops have not been able to tiller as well due to the dry spring and poor nitrogen uptake.

Normally herbicides are applied prior to the crop closing in, to provide competition against weeds for the rest of the season. This year many crops will not be thick enough to do this so there may be late weed flushes to cause later problems.

Where crop establishment has been patchy, herbicides and fungicides are being delayed for the time being.

Spring beans have established the best of all the spring-sown crops. Pea and bean weevil activity has been high as crops have been slow to grow in the cool, dry conditions.

In the worst-affected fields the U-shaped notches have been seen on the outside of every single leaf which has given a very ragged appearance.

Pre-emergence herbicides have not worked as well due to soils being dry for so long.

Some deep germinating weeds such as charlock and oilseed rape are now emerging which are having to be controlled with bentazone – the only active ingredient available for post emergence broad-leaved weed control.

Matford Arable (Devon)
The 2020 season continues to be a tricky one from both a climatic and a cropping point of view. I asked a colleague the other day how he was, and received the reply, “clinging to the wreckage”, which succinctly sums up this season.

Winter crops are all over the place, with planting dates and nitrogen timings having played a crucial role.

Those that received their first top dressing early enough to have worked well before the dry spell have by and large pulled themselves together pretty well. However, delayed top dressings have left crops looking hungry and very slow to start growing this spring.

Consequently, I now have winter wheat crops planted in October that range in growth stage from just at 31 to others that are at 39. Disease levels are very low following six weeks of dry weather, but many of the lower, non-productive leaves in the bottom of the crops are carrying the remnants of what was quite a severe septoria infestation as we came out of the winter.

Whatever we choose to do at flag leaf, it will only become evident with the benefit of hindsight whether it was the right thing to do or not.

Winter oilseed rape crops are also extremely variable and again this has largely been down to nitrogen timings, although some crops failed to establish optimum plant numbers in the autumn and subsequently suffered with the continuing wet through the winter

More maize
There is a much larger than usual area of both spring barley and forage maize planted this spring. We have had a large area of maize planted pretty early this year, with quite a few crops emerged in April, which is quite unusual.

With an arctic blast forecast at the time of writing we can probably expect to see some temperature-stressed crops in the next week or so. The spring barley crop has by and large gone into some very good seed-beds and is looking full of potential at present, but will require more rain soon if that potential is to be filled.

Where seed-beds were allowed to dry out before planting the spring barleys have emerged very unevenly and these, more than the other crop, will require adequate rainfall and soon.

I have been doing this job more years than I care to mention and cannot remember a season where Mother Nature has pulled nearly all the strings and we have been left in her wake, being able to exert little influence over what is happening. This has been exacerbated by product revocations which have taken away some of our tools.

Chlorpyrifos springs most readily to mind, as significant areas of crop have been lost to leatherjackets this season and we have been left powerless to prevent it happening.

Good luck to all with what is left of this challenging season. 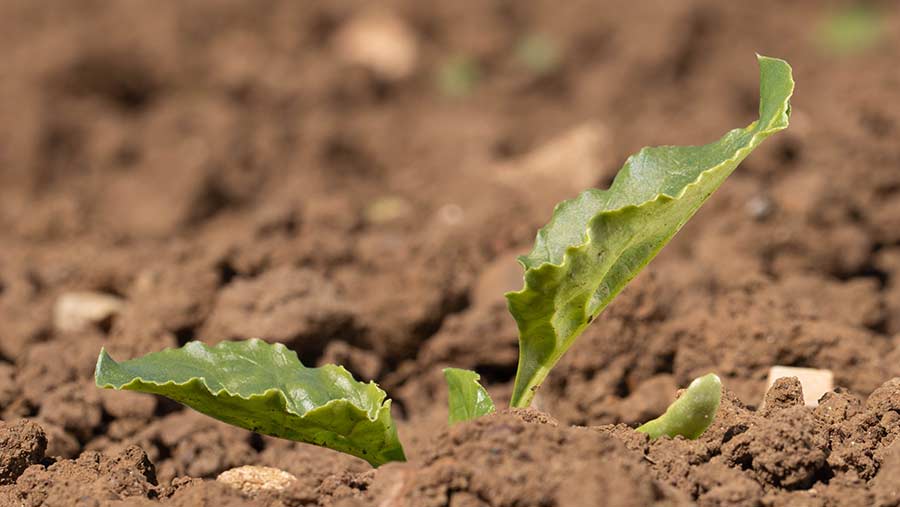 AICC (Sussex)
I’m supposed to write 300 words. However, I’m going to write a lot fewer, but make them very big.

We have just four days to empty our sheds of chlorothalonil!

Can’t you be slightly less dogmatic?