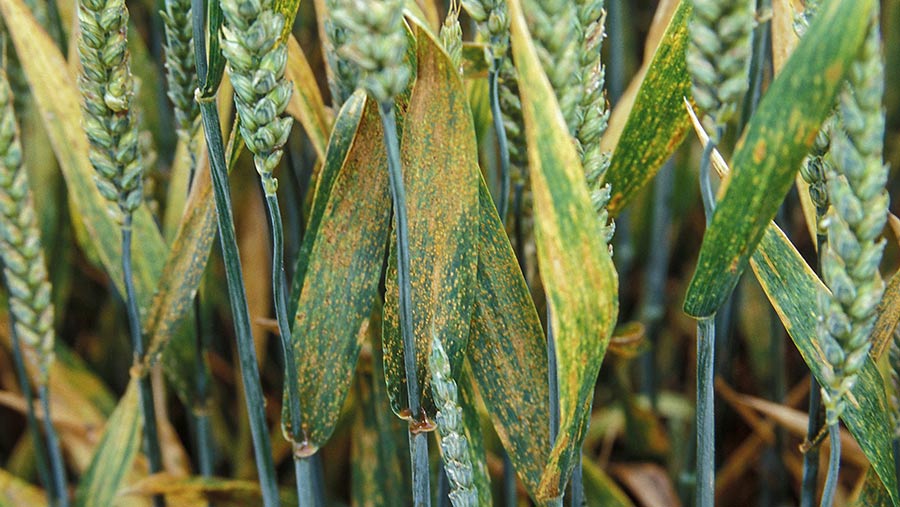 Cereal rust diseases can cut key protein levels in breadmaking wheats, and so growers need a strong rust active in their flag leaf sprays or they may miss out on valuable milling premiums.

With plenty of yellow rust and some brown rust being seen in crops, together with a sharply reduced wheat area, hitting £20/t-plus premiums could be even more important this season.

David King, head of technical at agrochemical and seed giant Syngenta, says the “parasitic” nature of rusts means they are protein hungry and can reduce levels when growers are aiming at breadmaking standards of 13%.

The threat of brown rust is likely to be greater than yellow rust for milling wheat growers as the disease strikes very quickly and thrives in the warmer weather of May and June when grain filling is taking place.

“Brown rust loves UK summer weather with its warm days and cool nights, moisture from dews to allow rust to germinate, and wind to help it spread,” he tells Farmers Weekly.

Many milling wheat varieties are susceptible to brown rust, such as Crusoe, while Zyatt has only moderate resistance. Skyfall shows the best resistance, but is susceptible to yellow rust (see table).

Rust is more prevalent this season due to the mild winter and the very real suspicion that there are many more races of the disease present. Yellow rust has been easy to find in the east of England while spots of brown rust are being detected.

The effect of rust is different to that of septoria in that it feeds on the protein in the leaves and so prevents this protein being transferred up into the grain.

Septoria is a necrotroph – a “thug” which lives off dead tissue, destroying green leaf and so photosynthetic capacity. Good disease control increases carbohydrate synthesis and hence yield, meaning it can dilute grain protein.

Rust, on the other hand, act as a biotroph, or “con-artist”. Plant cells are maintained but are tricked into feeding the attacking fungus. Rusts keep the plants alive and draw in proteins and carbohydrates, and so limit protein moving up into the grain.

Plant pathogens are often divided into biotrophs and necrotrophs, according to their lifestyles. Biotrophs feed on living host tissue, whereas necrotrophs kill host tissue and feed on the remains.

“If you control rust you will increase carbohydrate and protein, and therefore yield, unlike controlling septoria which will often dilute proteins,” says Mr King.

As wheat growers come up to the key T2 fungicide spray timing, brown rust is seen as a bigger threat than yellow rust, which is more important to control earlier in the season at T0 and T1.

Yellow rust is active at temperatures of 10-15C, and above 20C the disease development slows, whereas brown rust likes warm days up to 25C and cool nights. It also cycles quickly at 5-6 days and so is a real threat.

Azole fungicides such as epoxiconazole and tebuconazole or strobilurins will give a quick knock down of rust attacks, but Mr King argues that his company’s SDHI benzovindiflupyr (Solatenol) has the most persistent effect on rust diseases.

This SDHI is sold in a mixture with the popular azole prothioconazole as Elatus Era.

Mr King says long-term rust control is needed from the flag leaf spray, at say 20 May at the earliest, until mid-July at crop senescence for most crops in England.

“Brown rust cycles so fast there is a long time to protect,” he says.

Good rust control can be the difference between hitting the 13% protein grain that breadmakers generally demand and missing the target when the premium over feed wheat is currently more than £20/t.

With the wheat crop area set to be down 17% at 1.5m hectares because of the very wet autumn, according to the AHDB Early Bird survey, traders estimate the wheat harvest could be down towards 10m tonnes from 16.2m tonnes in 2019.

However, the millers still need 5m tonnes a year, so there is likely to be good demand.

Mr King says one of his group’s trials in Essex showed that Elatus, when used at T2, raised the protein of Crusoe to 13.7% compared with a rival SDHI-azole product giving only 12.5%.

It also gave a higher yield than the competitor product, and a 5t/ha advantage over an untreated area.

Rust control can be boosted with a T3 head spray, but Mr King argues that it is harder to hit the flag leaf and leaf 2 when the ear is out, so the most effective time to control rust is at the T2 timing.