With the T0 sprays approaching, our agronomists weigh up disease risk, with yellow rust the main concern for crops drilled from mid-October onwards.

For barley, manganese deficiency is a particular issue, and some crops are also showing signs of disease, with rhynchosporium prevalent along with brown rust in certain varieties.

In the East, thoughts turn to sugar beet establishment and the need to get crops off to a good start to beat the beet yellows threat.

Despite the cold snap, things are starting to move down here. Winter barley is feeling the benefit of the nitrogen and sulphur applied in late February. Hybrid varieties are rapidly approaching growth stage 30 and are due their fungicides and growth regulator.

See also: How a grower is enhancing nitrogen use efficiency on farm

Disease levels are low and mildew has been slowed down by the frosts. Fungicide choice will once again be centred around prothioconazole, largely in co-formulation with an SDHI. Only varieties with a low resistance to mildew, such as Orwell, will have a specific mildewicide added.

Only the earliest-drilled, most-forward wheats are anywhere near growth stage 30. With the absence of chlorothalonil this season, T0 fungicides will only be applied where yellow rust is rearing its head. Chlorothalonil was low-cost and effective, but replacement multisites are not in the same league and are hard to justify in the absence of yield-bearing leaves.

We have always selected varieties with high septoria resistance in the South West and the absence of key actives makes this even more important. Compared with further east we have seen very little of this disease so far – even in Skyfall, which is particularly susceptible.

Early-season passes in wheat will be limited to plant growth regulators and rust control, where appropriate.

Thankfully, I have seen little evidence of barley yellow dwarf virus in cereals this spring. This is a relief and justifies management decisions not to treat some crops last autumn.

The limited area of winter oilseed rape is moving towards yellow bud. Light leaf spot levels have been high in any sample submitted, so any growth regulatory fungicides have been geared towards this disease, with the inclusion of prothioconazole with the growth regulator.

This is the second time I have mentioned this active in one article – a reflection of how bare the azole cupboard has become.

Spring drilling is well under way, with excellent seed-beds on the lighter ground. We will need to be patient on the stronger ground.

The crop we are most excited about this season is oilseed rape. Having taken almost no pleasure from growing it for the past three years, we are once again looking to push performance rather than just limit damage. All the more so with the present price prospects.

Unlike those tempted to sow farm-saved seed early at high rates, we have even stands of thick-collared plants with perfectly manageable larval burdens.

Strong resistance in our hybrids and timely early-winter spraying means there is also little evidence of light leaf spot, as the plants start growing strongly, supported by nitrogen watered in by the recent rain.

So, we are happily leaving our stem extension spray to green bud to get the best branching effect from Toprex (difenoconazole + paclobutrazol). We will top up with prothioconazole, where necessary, to maintain our disease defences through to the flowering spray.

Our rediscovered OSR enthusiasm has been bolstered by the serious knock the first hard winter for a while has given winter linseed – especially on exposed chalkland, where trace element deficiencies weren’t addressed early or clethodim was employed to deal with blackgrass.

Although most of our crops should recover, we are very glad we have only dipped our toes into this particular water before gaining more experience. It’s certainly not an OSR alternative without its own share of risk.

Most of our wheats are also in a reasonable place as T0 approaches. In the absence of epoxiconazole, our preferred bromuconazole and tebuconazole co-formulation with or without folpet should keep the septoria in our early drillings at bay.

For anything drilled from mid-October, yellow rust is our key concern – the cold spell suppressed any early brown rust for now.

We will be relying on cyproconazole + azoxystrobin as our base here, or using pyraclostrobin mixes where we have particular variety concerns. As non-tebuconazole options, these also work well wherever we want to use pyroxsulam for brome control.

As always, we’ll include a low-temperature active chlormequat to support rooting and tillering, with a low-rate trinexepac for the more forward crops as part of a split T0-T1 regime to reduce its harshness.

Mindful of how often spring drilling gets in the way of the best-laid plans, we gave our later-drilled wheats on heavier land – patches of which sat in water for almost a month until early February – 70-80kg/ha of N in their first split.

And just as well, as spring drilling has been very much a stop-start affair this time around, with the earliest-sown crops taking almost a month to emerge.

We’re so glad we held off drilling barley on any heavier land. With soil temperatures beginning to warm and the weather settling down, it looks as if we should have just the conditions we need to get the rest of our cereals, peas and beans off to the best possible start by early April.

A month ago, I hoped for drier days and for my wellies to become walking boots. As I write this, we are again getting more rain, and the walking boots are back on the shelf.

Some fieldwork has been managed despite the wet weather. Most crops have received their first dose of nitrogen and some have had two. I even have lighter land spring barley in the ground, and I am hearing reports of sugar beet drilling too.

Now that I can hear the sound of skylarks, my thoughts are also turning to sugar beet. Seed will be delivered to farms in the next few weeks.

Frosts in February meant the emergency authorisation for Cruiser SB (thiamethoxam) was not approved, as the virus yellows forecast did not trigger the economic treatment threshold.

With aphid flights into beet predicted as late as mid-May, it is vitally important seed is drilled into good seed-beds, with adequate nutrition to ensure a good start.

As the beet plant matures it develops a tolerance to beet virus yellows. This usually takes place at the 12-leaf stage, but is in full effect by 16-18 leaves.

We no longer have desmedipham available for weed control in beet. With this in mind, greater consideration of herbicide programmes and crop growth stages is required. Care needs to be taken at the early stages not to knock the beet while remaining on top of yield-robbing weeds.

There are reports of early yellow rust being found in some wheat varieties. I am yet to come across any, but for those crops that require a pre-growth stage 30 treatment, remember that tebuconazole can no longer be applied before T0.

Wheat T0 is not far away, with some early-drilled fields already at this stage. Once these applications begin, the spring seems to fly by and it will feel as if T1 is upon us in no time at all. It amazes me how quickly the season passes each year.

After a cold and wet February, it seems spring is finally making an appearance and soil temperatures have been rising fast over the past fortnight.

With the increasing temperatures, diseases in winter crops are starting to show. In particular, rhynchosporium is prevalent in winter barley crops, along with brown rust in certain varieties.

It is advisable to consider targeting this at the T0 timing, as barley yields can be severely affected by early disease because it can affect tiller survival, and ear number is crucial for final yield in barley crops.

Manganese deficiency is a particular issue in barley crops at the moment, and is also evident in some wheat crops, especially on light land.

It is crucial to get manganese into these crops as soon as possible to reduce the effect on yield. If soils are lifted and puffy, rolling is advisable if conditions permit, as this will help plants access nutrients in the soil. 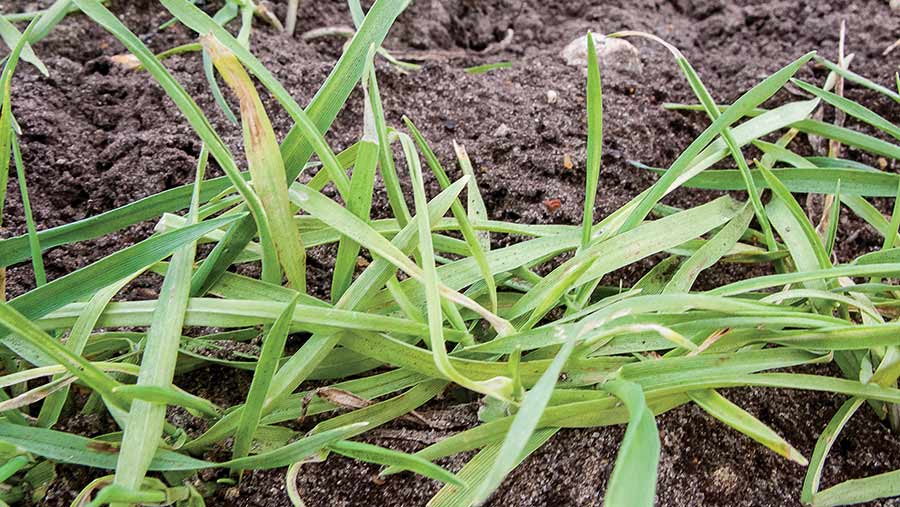 Septoria infections in wheat are increasing in the wet weather and the level of infection varies hugely from field to field. It is important to assess crops thoroughly before deciding on fungicide strategy.

Our Cumbrian trial site is looking well and already providing some interesting observations in terms of disease presence in various varieties. Infections of septoria and yellow rust in the wheats, and rhynchosporium and brown rust in the barleys are present at the site.

Extase is currently the standout variety within the wheats for high biomass and low disease infection at this stage. We are seeing some interesting increases in tiller numbers with Tiros seed treatment on Skyscraper wheat.

The trial site this year will include some field-scale spring barley drilling trials, which I hope will be drilled over the next week. It will compare the farm’s traditional plough and combination drill programme with the Mzuri strip-till option.

This strip-till option will move less soil, improve soil structure and look to improve our carbon balance on the farm, which is a key area of interest at our trial site.