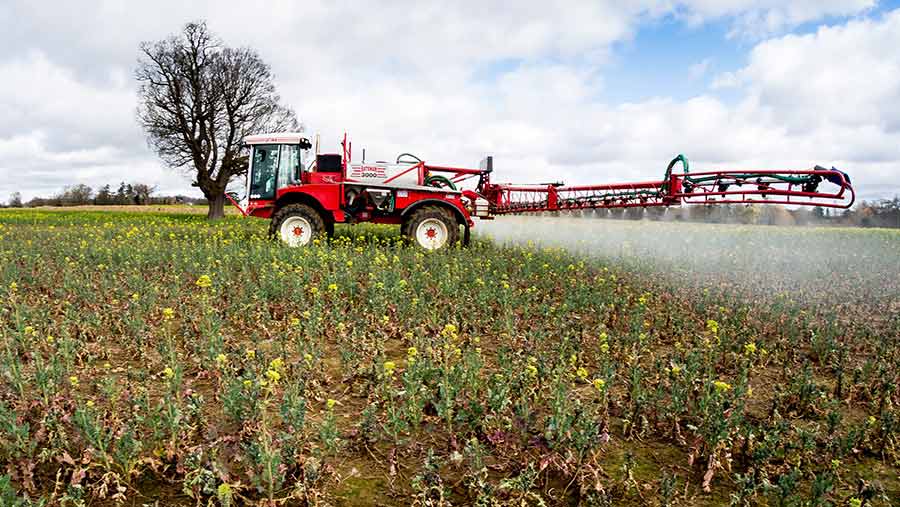 While crops are much more forward than last year given the more favourable spring conditions, the one big loser is oilseed rape.

Many crops are failing and it has sparked debate over the crop’s future, which could see farmers opt for alternative breakcrops.

While they offer lower returns, they have a lower risk.

Wheat crops are variable in terms of growth stage, with some in the South already receiving a T1.

This could lead to problems with the interval before the T2 timing being stretched.

Finally, the “growy” conditions have seen broad-leaved weeds wake up with a vengeance with some healthy-looking cleavers.

This time last year, we had hardly turned a wheel.

Many fields were too wet to travel on and some spring barleys were still a month away from being drilled. What a difference this year.

What wasn’t drilled during the tropical February spell has now gone in, again in superb condition.

Even the hiccup of storm Gareth didn’t let people get behind.

Oilseed rape ranges from looking normal, to disappearing/written off.

There are crops on virgin OSR ground that have a level of larvae in the leaf petioles and stems.

I have never seen anything like it, and apart from frequency in the rotation, I still can’t see a pattern as to why some crops are fairing better than others.

Many growers are questioning whether to risk growing OSR again and I can see the area shrinking dramatically next season.

I heard on the radio the other day that while pollinators, including bees, are reducing in numbers globally, in areas of high OSR production their numbers have actually increased since the 1980s, as it is such a valuable food source.

How ironic would it be if bee numbers declined because the area of their food source reduced because of the ban on neonics?

Some earlier drilled cereals are romping on to their first growth regulator and fungicide timings.

Please don’t call it a T0. It’s a fungicide timing. Because of the early start, I can see most wheats getting four applications of fungicide this year.

Also, because of the growy conditions, broad-leaved weeds have woken up with a vengeance. It’s not often we see such healthy cleavers this time of year.

It’s more or less possible to gauge when the wheat was drilled by how successful the blackgrass control has been – anything drilled before 7 October has had very poor control, anything drilled after 14 October probably doesn’t need overspraying.

Dry weather during late March provided another excellent opportunity for drilling a range of spring crops.

Seed-beds have been good and most crops were drilled into moisture, apart from some heavier soils, which were beginning to dry out.

Winter cereals are in good condition and their spring counterparts have established well, except for a few headlands on heavier soils, which capped after heavy rainfall following February drilling.

In contrast, oilseed rape is a patchwork quilt, ranging from the good, to the bad, to the ugly.

There have been numerous conversations about whether to continue growing oilseed rape after the cabbage stem flea beetle issues this season.

The level of risk with this crop is now so much higher for the level of financial returns compared with other crop, consequently its area will decline this autumn.

For some it will be a case of reducing risk and accepting potential lower, but more consistent, financial returns compared with OSR.

The earliest oilseed rape crops are now beginning to flower.

Pollen beetles have been present, but have rarely exceeded 10 beetles per plant, which is still below threshold. Thankfully, insecticides have not been required.

Once crops are flowering, pollen beetles no longer pose a threat to the crop.

Those crops affected by cabbage stem flea beetle larvae are still struggling but at least are beginning to show limited signs of recovery.

The more disease-resistant varieties have not required any fungicide at this timing.

Here, an azole fungicide has been added to the T0 mix to keep the rust under control.

A mixture of brown rust, mildew and net blotch are the main disease targets at the T1 timing.

The earliest spring crops are now at the three-leaf stage.

On light soils, manganese will soon be applied with the aim of preventing deficiency symptoms appearing rather than trying to cure them.

Blackgrass control from the pre-emergence herbicides so far appear to have worked well from the February-sown crops.

The spring continues to very different from 2018, with everything being more forward then last year and the weather being kind and allowing field operations to go ahead.

The winter rape crops have rarely looked better in that there are far fewer bits of fields missing and crop development and density are pretty much spot on.

There is also very little sign of any pest or disease build-up.

Pollen beetle is present in many crops, but at levels that are well below threshold.

Most crops have now received a stem extension fungicide and are now beginning to flower.

I hesitate to say that the crop looks promising, as oilseed rape always retains a capacity to surprise and a good looking crop is no guarantee of a good yield at harvest.

Winter barley crops are steaming through the growth stages, with many crops already heading towards growth stage 32.

There has been plenty of mildew, rynchosporium and brown rust in the barley crops this spring.

Most crops are currently receiving their T1 fungicides.

In most cases this will be made up of a mixture of an azole and an SDHI or a strobilurin, depending on the disease mix in the crop.

The loss of chlorothalonil as an active is a worry in barley crops, as it is going to make the control of ramularia more difficult.

Ramularia has, year on year, become a more significant disease than it used to be.

The amount of biomass already grown would suggest that we could be looking at a lot higher lodging risk this year than last and most crops are consequently receiving a robust plant growth regulator along with the T1 fungicide.

Winter wheat crops are variable in terms of growth stage, depending on drilling date and location.

The most forward crops have already reached growth stage 32 and are receiving their T1 fungicides.

This brings problems as the interval before T2 is likely to be extended.

The more backward crops are just about at GS30 and have just received their T0 fungicides.

Septoria, as always in the South West, continues to be the main focus for fungicide programmes.

The recent dry spell will, hopefully, have slowed the development of septoria, but in many crops the lower leaves are largely wiped out with the disease so there is a good reservoir of infection within crops, if the rain returns.

The earlier drilled spring barley crops have emerged well and are looking quite pretty.

This time last year, I had no spring barley planted, let alone emerged.

The spring of 2011 taught me a valuable and unforgettable lesson: respect and conserve soil moisture levels.

At the time I was managing a chalky, light-land farm, one-third of the sugar beet drilled that year didn’t germinate, the peas yielded less than 2t/ha and the spring barley was patchy to say the least.

On lighter land, most of the crops drilled in the past 10 days are in one of two camps.

First, land that was worked in the autumn to produce a rough seed-bed, and also crops that have been direct drilled are in nice, moist seed-beds.

However, land that for whatever reason has been worked within the past month, especially where a catch or cover crop has been used, is dry. Unless there is significant rainfall in the near future, establishment will be patchy.

The dry weather has also seen yellow rust manifesting itself in a number of winter wheat crops in the past 10 days. 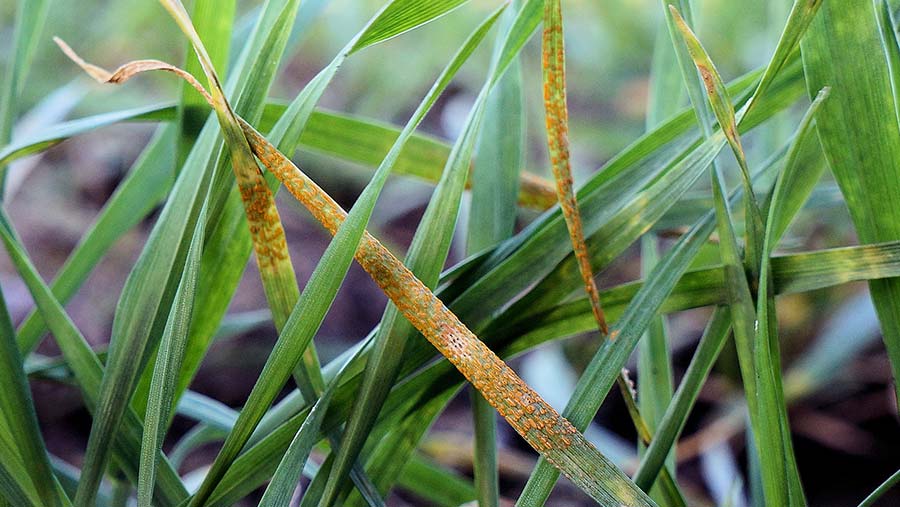 Worryingly, varieties with resistance ratings of 8s and 9s are showing signs of the disease as well.

Tebuconazole, or fenpropimorph where mildew is present, has been added to T0 fungicide mixes.

Where T0 applications have either not been planned, or have been applied already, crops will be monitored for signs of the disease prior -T1 timing and treated accordingly.

On the blackgrass front, spring applications of iodosulfuron + mesosulfuron have, on the whole, been successful, with good levels of control in most places.

The general move toward later drilling has reduced blackgrass populations within crops, but has also presented much smaller weeds to control in the spring.

With the loss of clothianidin seed treatments, this move to later drilling will inevitably be here to stay to also reduce the risk of barley yellow dwarf virus infection in autumn-drilled cereals.