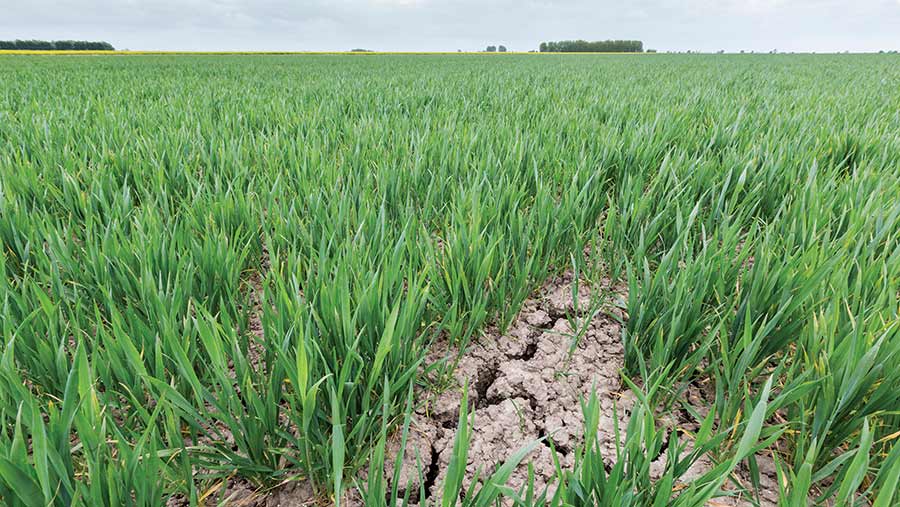 This season is turning into one that many farmers and agronomists will want to forget, and harvest can’t come soon enough to see the back of many poor and patchy crops.

Yield expectations are wilting away as the dry spell continues with crops desperate for rain. One positive is that the combination of dry weather and thin crops mean disease pressure is lower in wheat.

However, it’s the later-drilled spring barley that is the current concern, with growing doubts that some crops in both the North and South West will produce a viable crop, with no meaningful rain forecast in the coming days.

The prolonged dry weather is adding to what was already proving to be one of the most challenging seasons for a while. While most crops are generally still looking well, let’s hope the “drip in June to keep things in tune” materialises to ensure they realise their full potential.

Winter wheat has reached flag leaf emergence and T2s are being applied. Yellow rust pressure has been high this year in a range of varieties, which probably shouldn’t come as a surprise, given the weather and the fact that all are susceptible at the seedling seed stage, except Costello, Crispin, Parkin, Siskin, Theodore and Saki.

See also: How deep cultivations can repair heavy land after a wet winter

Adult plant resistance, as described in the AHDB Recommended Lists, is not fully expressed until flag leaf emergence. The inclusion of epoxiconazole and a strobilurin at T1 have helped keep the disease in check so far, but it is important to keep the intervals between T1 and T2 to no more than three to three-and-a-half weeks as the latent period of the disease is short.

Septoria remains in the base of many crops, and while the current risk of a septoria epidemic is low, treatments need to be appropriate in order to prevent the disease moving further up the canopy, should the weather turn against us as it did in 2019. Keep in mind that 65% of the final yield comes from ensuring leaf one and ear are kept clean.

New chemistry
When it comes to septoria control, we have the addition of new chemistry this year in the form of Revysol (mefentrifluconazole). In trials last year, it was evident to see the improved efficacy over the current best standards. However, be mindful that its yellow rust activity is not as robust, so the inclusion of a strobilurin may be required to bolster rust control and ensure the crop is fully protected.

For quality wheats, monitoring nitrogen levels within a flag leaf will give an understanding about what levels are currently within the plant. If this gives low readings, a top-up maybe required, and if the dry weather persists, this will be best achieved through a late foliar nitrogen application.

The cold nights are making weed control in sugar beet even more challenging. Aphid populations within sugar beet have certainly already reached threshold, and they have had the first treatment. With warming temperatures, aphid pressure will increase, so continue to monitor for the threshold of “one wingless green aphid per four beet plants”.

Since 20 March, we have scrambled together 12mm of rain in several discreet showers. The winter crops drilled in September now look resplendent and lord it over the landscape. Unfortunately, that only amounts to a small proportion of the land drilled.

Despite the wide range of winter wheat drilling dates, crops are starting to catch up with each other. The early-drilled crops are now at flag leaf emerged, but this varies from 100% out to 60% out, depending on variety.

Flag leaf fungicides are now being applied to what are overall very clean crops. Yellow rust is our biggest problem and, depending on previous treatments, we have crops where we are in control of the disease, while in others the disease is in control and we are operating intensive care treatments.

The weather could not have been better for yellow rust, but fortunately it is awful for Septoria tritici development. We have taken the opportunity to strengthen our rust control options, while using a dose rate appropriate for septoria.

Late-drilled wheats are a real mix of potential, varying from average to those you wish would just go away. I am reasonably confident that the early wheats will perform in terms of yield, but the later-drilled ones will need some divine intervention.

Failing spring barley
Spring barley crops are also a mixed bag, with anything drilled in mid-April looking like fields with alopecia. With no rain in the immediate forecast, I fear these fields will not make a combinable crop.

The early-drilled crops look well, but would certainly benefit from a good drink and are exhibiting every colour of green in an artist’s pallet. Every snake oil treatment has been tried, but secretly we all know the missing ingredient is water.

Winter beans are now flowering well and the arrival of Syngenta’s Bruchidcast starts the annual debate over their control. Unfortunately, I am in the camp of not treating, as I believe the available chemistry has limited effectiveness.

Spring beans drilled early look well. Fortunately, very few were drilled late, and as such they are probably the most successfully established out of the spring crops. Some post-emergence weed control with bentazone has been used, but these are targeted fields with the correct weed spectrum.

Finally, I move on to oilseed rape. Where do I start? Or should I say finish? I think for many growers this will be the last rites for the crop. Flowering is finishing and we get closer to finally destroying the crop. If we average more than 3t/ha, I will truly believe in miracles.

This season will not be forgotten easily. In Kent, we have the whole range of establishments for both winter and spring crops. Alongside the usual array, there has been an upswing in some of the niche crops such as soya, millet, canary seed and borage, adding a level of complexity to our situation.

As one might expect, on better soils, crops have established well, but the heavier ones are a different story. In places there are considerable differences in growth stages within individual fields, which is making the timing of inputs challenging. The drought and temperature ranges are stressing a lot of crops. Tissue analysis is showing low levels of some micronutrients, such as magnesium, manganese, sulphur, boron and zinc. Addressing these deficiencies is the right thing to do, but one feels that a continued drought will be the determining factor in the end.

On winter wheat, we have had a reasonable chance to use up on-farm stocks at T0, T1 and T2 before chlorothalonil D-day on 20 May. For the later-drilled crops, it has been more challenging, with the looming date determining later fungicide applications, although septoria pressure is generally low.

Ryegrass, on the other hand, seems to be getting less and less responsive to herbicides. Enhanced metabolism-resistant and target site-resistant strains continue to germinate through the spring and can quickly dominate a cereal crop.

To prevent profuse seed return in such situations often call for tough action, with the worst-affected areas best taken out with glyphosate or a mower. Until effective new chemistry comes along, rotations which include a winter break crop of OSR or beans or a “spring-cleaning” cereal and targeted direct drilling remain the best options for control of resistant ryegrass.

Things are just not getting any better. What started as a difficult growing season has only gotten harder. With the lack of rain, both autumn- and spring-sown crops are hugely variable, not only from field to field, but also within fields.

Autumn-sown barleys range from being fairly good to mediocre. Early-drilled crops on the drier land that were fertilised on time are looking OK – they are slightly thin, but on the whole should do reasonably well.

Later-drilled crops on heavier ground started thin and have become thinner, having lost tillers early on. At best, these are going to give below-average yields, and cutting input costs on these has been the game of the day.

But the dry weather and thinner crops has meant they are all at least relatively clean.

Winter wheat crops are all over the place – not only in growth stage, but also in yield expectation. Many crops have large areas where they are very thin. The dry weather has reduced tillers, as most fertiliser was put on and then sat on the ground for a few weeks. When the rain did come, it wasn’t enough to really help the crops.

The spring crops also vary immensely, from very good to almost a write-off. Moisture is again the main culprit here. Crops drilled into good seed-beds have done well. Some crops drilled in poorer seed-beds have areas where there is little or no crop. The growth stages vary immensely across the field, which makes decisions on spraying very difficult.

Maize establishment
Maize drilling is now complete and most crops are up. The frosts and cold winds of last week have checked some fields, but the warmer weather will hopefully now see these crops go dark green and pull away.

Weed control will start to happen in the next week or so on the early-drilled crops, and this will be a combination of nicosulfuron, pyridate and mesotrione.

I have to use nicosulfuron on nearly all the crops I walk due to the amount of barnyard grass present. This does leave me questioning how we are meant to undersow grass into these crops, and how well the grass will establish.

We are being encouraged to do this by the water companies, but on the couple of farms that have tried it, the grass hasn’t grown. Is this the effect of the nicosulfuron or ground conditions? If I’m honest, I’m not 100% sure.

Although I don’t look after any, there seems to be more maize grown under plastic (sorry, film) in our area now. I struggle to defend the reason for this to some members of public, as all they see is acres of land covered in what looks like plastic.

In terms of public perception, I think it’s a disaster. Controversial, I know, but I think we are doing the industry damage.