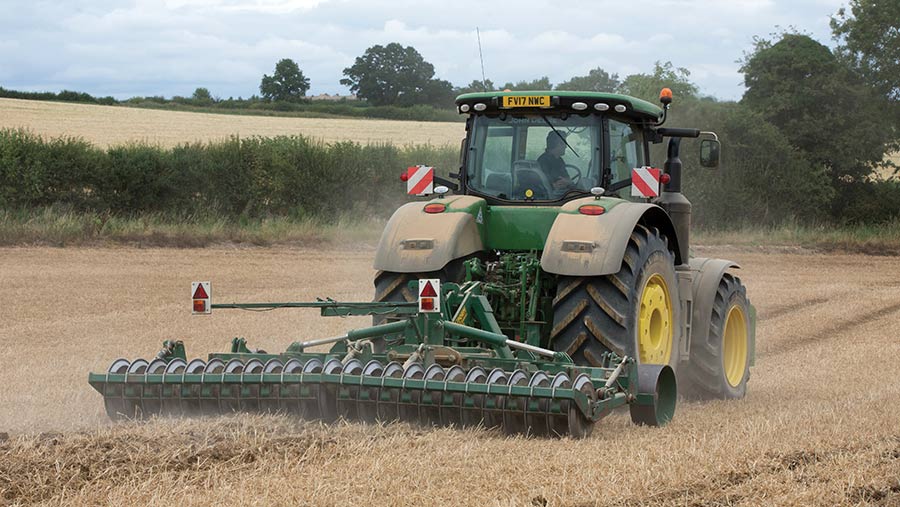 Heavy land arable farmers could benefit from subsoiling or mole ploughing after harvest in order to get soils back into shape, ready for autumn cropping, after a wet and damaging winter.

Some growers are being forced to fallow land after the winter deluge, while many eventually managed to plant a spring cereal. However, where soil structure has been damaged – particularly on silty clay soils – post-harvest remedial work will be essential to optimise yields for subsequent seasons.

David Felce, Cambridgeshire grower and Agrii regional technical adviser, says uncropped land is, arguably, the least of a grower’s problems this year, as it allows opportunity for treatment work, with little constraints on what to do and when (subject to cross-compliance requirements).

“Far more problematic is the vast majority of land that has undoubtedly been damaged, but is currently being cropped. We have so much less opportunity to deal with damage at depth here, ahead of the 2021 crop, which we are depending on to make-up for this season’s lost margins,” he adds.

While clay soils have often suffered the worst over the winter, Mr Felce’s greatest concerns are for soils with a high silt content, such as the Hanslope clays he farms at Middloe Grange Farm, near St Neots.

“Relatively high-silt soils over clay are always the most problematic in my experience, with problems occurring at any depth in the profile and unevenly across the field, depending on specific conditions and where the initial damage occurs,” he says.

This is because silt runs down the soil profile, accumulating in impermeable layers, which can cause serious problems, since minor damage cannot be overcome naturally, like in clay soils.

He therefore advises growers to consider either subsoiling, mole-draining or using specialist cultivations to alleviate compaction and drainage issues, insisting that whatever techniques are used, they must be well planned and managed.

His first tip is for growers to get the spade out after harvest, so they know what they’re dealing with by using digital imagery and yield maps to help identify and address what’s happening beneath. This will help any problems to be correctly rectified.

Subsoilling is just one strategy used to effectively break up compaction deep within the soil profile.

Mr Felce says he uses a low-disturbance subsoiler to alleviate restrictive silt layers that accumulate at a depth of 15-17cm in his soils by cracking aggregates, allowing greater rooting potential for subsequent crops.

“We have to target the subsoiler leg carefully to work within the band of disrupted drainage, not below it, as working too deep risks driving the problem deeper,” he adds.

This aims to promote soil resilience by creating a stable column structure which enables good water infiltration so soils can support the weight of water during times of heavy rain.

“You have to remember that 25mm of rain accumulating on the soil surface can weigh up to 280t/ha,” he adds.

Mr Felce believes a limited water supply later in the season is often responsible for a loss in yield, so deeper rooting to enable access to water would be greatly beneficial. 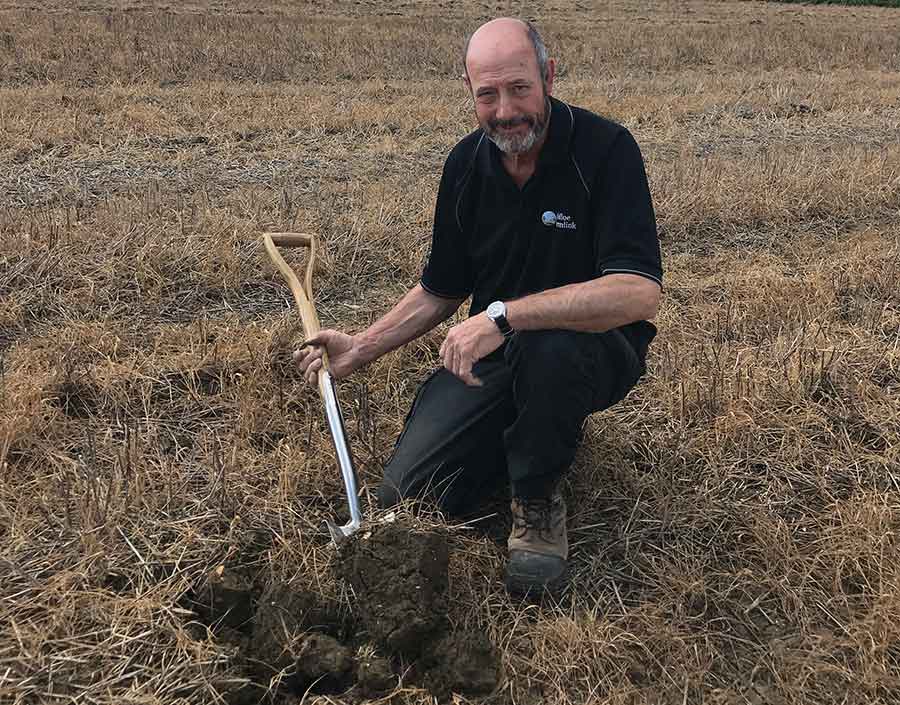 David Felce is planning to use a cover crop mix in combination with cultivation practices on his fallow land, which was unable to be cropped this year due to the wet winter.

The mix includes shallow-rooting plants, such as black oats and vetches, which aim to hold the soil in place while enhancing the structure of the drilling zone.

“Heavier soils need more work, with targeted cultivations required to set the soil up for the pass of our low-disturbance Sky drill.

“We’re now using cover crops to help facilitate this setup, which is especially important given the greater focus on carbon capture and a future-looking approach to farming,” he says.

All soils are different, with some able to cope with going straight in with the drill, but others, like his Hanslope clay soils, needing a cultivation, which is why he uses a low-disturbance subsoiler.

Ultimate aim
Mr Felce’s ultimate goal is to reduce the intensity of his cultivations and eventually rule it out altogether, but he admits he is not there yet and a great deal of precision soil techniques will be required to achieve this.

His current cropping plans includes 9.5ha oilseed rape, 24ha of winter wheat (which was meant to be 30ha), 11ha of spring barley, 11ha of winter barley and 7ha of winter beans, where, unfortunately, 3ha were unable to be planted.

Yields of his winter wheat crop reached 13t/ha last year, but Mr Felce admits that the usual average for his farm is nearer 10t/ha. However, in this difficult year, he is budgeting for a 8-9t/ha crop.

However, he warns that the timing of subsoiling is critical as, if it is carried out at the wrong time or when not required, it can create additional problems when overworked soils becomes fragile and vulnerable.

“Whenever we do it – whether in areas of a poor-standing crop or between harvest and our next crop – we can do far more harm than good with a subsoiler, if the soil is too wet.

“It should be carried out when the soil is in a non-plastic condition, so it’s in the right state for vertical fissuring without smearing,” Mr Felce says.

He also warns growers that where water has collected on the surface over winter and later dried in the recent warm weather, a crusty soil surface will have developed on the soil surface.

In this case, a light cultivation with a disc or tine should be used to break up the crust. Mr Felce points out deeper cultivations should be avoided, as this would only make the situation worse by bringing up wet soil from below.

“If there are no restrictions at depth, all that is required is a friable tilth to provide good soil-to-seed contact and germination,” he adds.

Strategic mole-draining within a crop or after harvest can also be a valuable method to deal with drainage issues, where the technique aims to connect permanent drains across a field, working at a depth about 60cm in the soil.

Mr Felce advises growers that mole-draining should only be attempted when the subsoil is in a plastic state and soils have a clay content of 30-40% and a sand content of less than 30%, otherwise the mole drains can collapse.

“If the soil is suitable for mole-draining, then it is not optimal conditions to be sub-soiling,” he says.

“If we’re going into a ditch, we should be careful the mole doesn’t rise up at the outfall, as it naturally tends to do. I always make a plastic pipe connection here to avoid this,” Mr Felce adds.