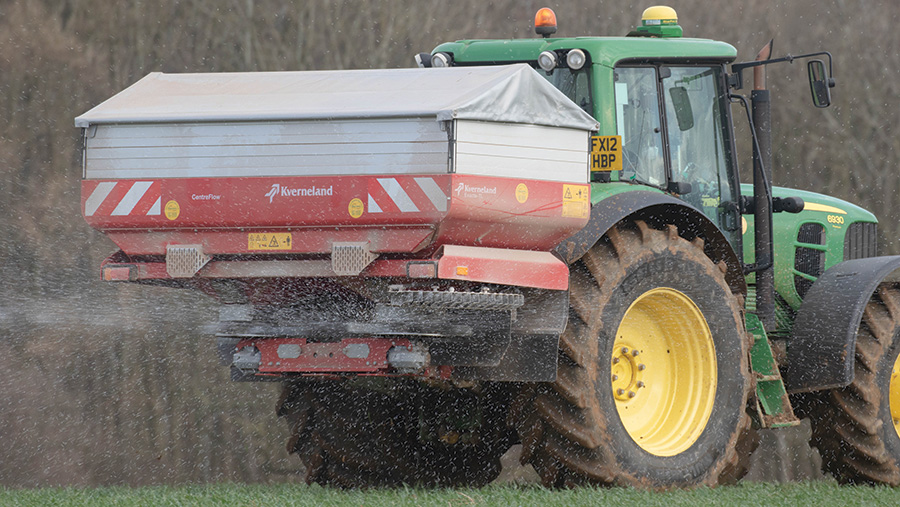 With spring on the horizon, our agronomists are assessing crops in the ground and planning fertiliser and other inputs for the coming weeks.

Waterlogging because of yet another wet winter has affected many crops, although one positive is that the cold spell may have helped dampen down the disease threat.

Here in Suffolk, the forecast is promising drier weather. Who would have thought autumn 2020 would turn out to be wetter than the one before?

Lessons learned from 2019 mean more winter cereals were successfully established this season, with more flufenacet-based pre- or post-emergence residuals applied to control blackgrass and broad-leaved weeds. Where residuals have been applied, control looks promising to date.

Those fields without residual applications will need to be assessed for blackgrass levels and a form of contact grassweed herbicide planned for when fields dry up enough for sprayers to travel.

New chemistry in the form of thiencarbazone, mesosulfuron and iodosulfuron have recently gained approval for winter wheat and winter triticale. In our trials, this new combination of actives has shown favourable results to control grassweeds when compared with existing products.

All planned Kerb (propyzamide) applications should now have been made to OSR. Activity on blackgrass has been slow, but looks to be effective.

Those growers who haven’t managed to apply Kerb can still apply Crawler (carbetamide) before the beginning of stem extension, and up to the end of February.

Early nitrogen applications should now be at the forefront of growers’ minds. Many OSR crops are beginning to show signs of starting spring growth; missed opportunities now may affect yield later on.

For most, spring field work is yet to begin. With the majority of field conditions currently far from ideal, with heavy waterlogging in low-lying areas, it is important not to dwell on calendar date, but to focus on individual field situations.

Farmers should be vigilant to make the most of opportunities when they arise. Seed-beds need to be right to ensure a fast and even establishment of the spring crop. This is, after all, a key stepping stone to the success of any crop.

An exceptionally cold January is behind us, and the weather is warming up and starting to slowly raise soil temperatures. Winter wheats and barleys are still in the early tillering stage and generally look well.

Recent cold weather is likely to have slowed development of diseases such as septoria, but as the milder weather returns, crops should be monitored to assess spread of disease and plan spring disease-control strategies.

In the warming temperatures, cereal crops – especially those with poorer establishment and thinner plant populations – would benefit from early nitrogen to encourage tiller retention, where conditions allow.

However, avoid large doses of N this early in the season, as root systems will not be able to fully use them in this early growth period. Compounds should be considered for early application to ensure freely available NPKS in the upper soil root zone.

This a great time to spend some time assessing grassland and making management decisions for next year, before spring arrives and we all become busy.

Consider which of your grasslands performed poorly last season and the reasons why – whether that be regression of sown species, ingression of weeds, poor soil structure or nutrient deficiency. This will give ample time to take soil samples and assess soil structure, ready to correct issues such as lime or compaction before reseeding this spring or autumn.

A good way to assess the percentage of sown species remaining in a ryegrass-based sward is to pull up plants and assess how many have the characteristic red/purple stem base of ryegrass. When more than 50% of the sward is made up of weed species such as annual meadowgrass, it is advisable to consider reseeding, as weed grasses are inefficient users of nitrogen.

Annual meadowgrass has a nitrogen response of 33%, compared with 100% for perennial ryegrass, wasting money and reducing grass yield significantly – especially with the current high fertiliser prices.

Another season of fancy drilling footwork sees us with three distinct types of wheat – all looking promising, but each requiring a different approach to fulfil that promise.

The crops drilled on our low blackgrass ground in late September are thick and carrying too many tillers for our 700 ears/sq m target.

To restrict tiller survival, they are firmly at the back of the queue for their first nitrogen application. And, despite generally low soil N-Mins after all the wet weather, this may be quite modest.

Some of these crops will need trinexapac as well as a low-temperature active chlormequat at T0. Hopefully, the cold snap will have kept the lid on worrying early levels of rusts and septoria. Wherever rusts remain a concern, our fungicide programme will be firmly based on a curative azole.

Requiring a very different approach are the wheats on our worst blackgrass ground and after maize, which the weather prevented us drilling until late October/early November.

These are very clean and may not need an early fungicide. However, they are only just beginning to tiller and have suffered the most in the wet.

We are prioritising them for early nutrition, starting with a substantial dose of nitrogen and a pre-T0 spray of phosphite plus manganese, with a low-temperature active chlormequat where necessary for the best root and tiller stimulation and support.

Between these extremes sit the 50% of our wheat crops drilled in a good early to mid-October window.

Overall, they are very nicely structured, with two to three strong tillers and generally low disease levels. This means it is very much business as usual here, with nitrogen applications geared carefully to N-Mins and the low-temperature active chlormequat – with or without trinexapac – as part of a preventative septoria-focused T0.

We are very much in two minds on the multisite front these days. It may be valuable in anti-resistance terms, but folpet is hard to justify in terms of the  cost:benefit ratio.

Well-balanced is the best description of our OSR this season. As well as being on generally well-drained ground, it has definitely profited from not being drilled too early. Unlike some, we don’t have oversized canopies or excessive levels of cabbage stem flea beetle larvae to worry about.

Really even, strongly rooted crops with their growing points nice and close to the ground will be getting their first N imminently. Little visible light leaf spot gives us the leeway to hold off on stem extension spraying until nearer the green bud stage.

We are in no rush with our spring drilling either. To take full advantage of both our cover cropping and some decent frosts, what our seed-bed preparation needs more than ever is time for the ground to dry out and warm up.

While the recent cold snap did not rival the 2018 “Beast from the East” for longevity, there were still some noticeable effects.

Winter beans ploughed in during mid-November took a hammering on high ground. A lot of leaf and even some stems were blackened, but close inspection revealed a small pair of unfolded green leaves at the apex of the plant, which means recovery will be possible.

Plants subjected to such stress may be more susceptible to disease later, so watch the fungicide timings. Many forward OSR crops were flattened and lost leaf.

When planning spring nitrogen applications, use the canopy size before leaves were lost for calculations, as N from them is likely to be recycled. Unfortunately, cabbage stem flea beetle larvae are now prevalent in many crops – we hope larger canopies will have the capacity to recover. 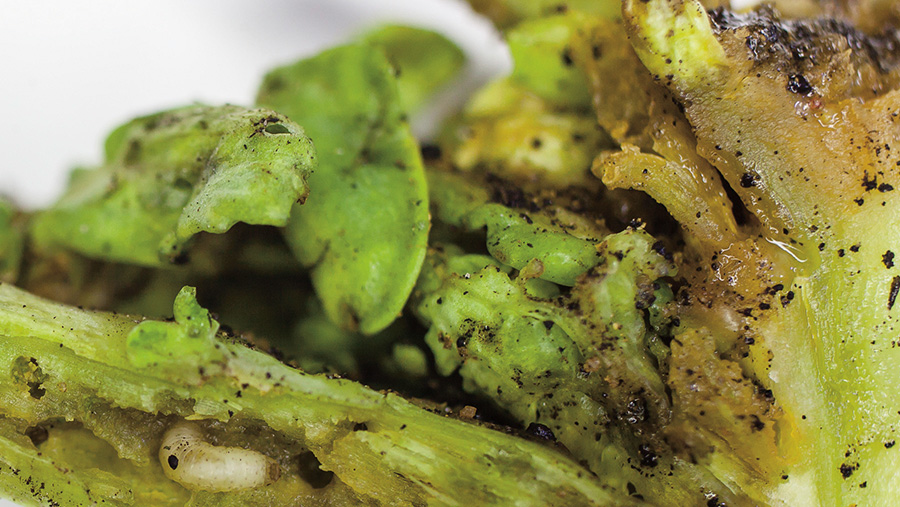 Winter cereals tolerated the frost well. The biggest problem remains waterlogging, and some spring patching up will be needed once drains stop running and land is drier than field capacity.

Reactionary behaviour is not always an ideal agricultural practice, but the previous two wet autumns have engendered a mindset among some growers of “drill and be damned”. Bear in mind there are no easy fixes to the problems brought about by early sowing, which I do not need to list here.

Yellow rust remains a concern, although one benefit of the cold snap may well be a lessening of the epidemic. Remain vigilant.

March is a transitional month, with April marking the real start of spring

Priority tasks are now applying nitrogen to winter barley and judging whether follow-up grassweed sprays are necessary on winter wheat. There are few sights to gladden a farmer’s or agronomist’s heart more than crops turning green and weeds turning yellow.

Looking forward to post-winter hibernation, nutrient management plans are being put together. Once soil temperatures reach 6C – the magic figure for abundant spring growth – priority will be given to sulphur plus nitrogen applications on the oilseed rape crops.

With spring just around the corner, autumn-sown cereals will require close inspection for the presence of yield-robbing grassweeds. Due to high levels of herbicide resistance now present in ryegrass and blackgrass populations, it is imperative to spray contact graminicides as early as possible in the spring to stand any chance of effective control.

Careful consideration also needs to be given to factors such as active growth, correct nozzle and adjuvant choice, and forward spraying speed before fields are treated.

It is worth noting that some of the more popular winter wheat varieties grown in the South have now been downgraded for their resistance to yellow and brown rust. Extra vigilance for infection outbreaks will be the name of the game when spring arrives.

Control measures for yellow rust will be key at T0 timing and, with the revocations of the actives epoxiconazole and cholorthalonil, product choice will become even more critical to prevent infections recycling throughout the spring.