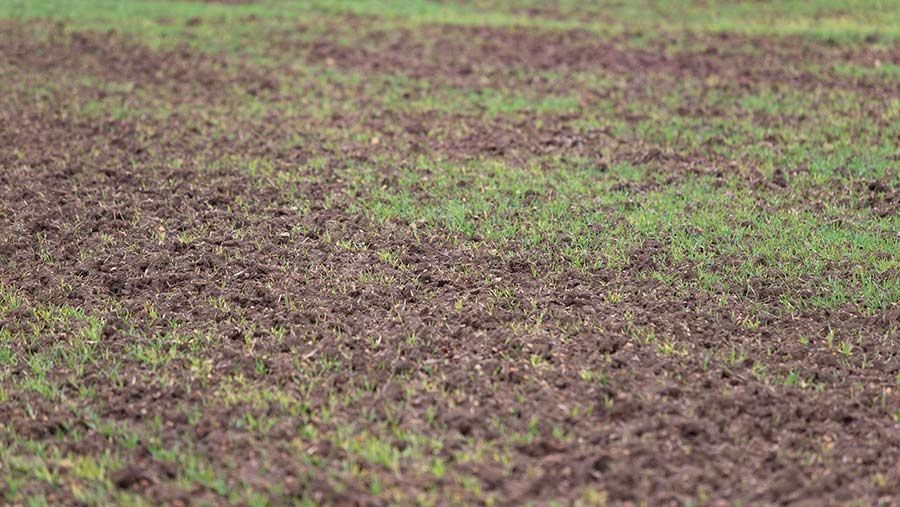 Extreme wet weather in early October has left its mark, with crops rotting in the ground in the west, resulting in crop failures. Damage is also evident in the north, especially the late-September drilled wheats.

High rainfall also means some oilseed rape crops in the east are reaching the 10% threshold for phoma sprays, with smaller crops being at highest risk with less distance for the fungus to travel to infect the stem.

As soil temperatures fall, propyzamide timing will need to be monitored for grassweed control, where needed, in oilseed rape and winter bean crops.

Since my last report we had extreme weather over the first weekend of October. We recorded 95mm of rain in a five-day period, with more than 30mm falling in a 24hr period on two consecutive days.

This didn’t do anything to help the crops that had been drilled in the 10 days prior to this downpour. I have had crops rot in the ground: they had a chit 10mm long on them and then gave up as they were sat in water.

I have about 61ha of winter wheat that had been lost due to rotting. Of this, 36ha was re-drilled on 19 October. There was also a large acreage of crops following maize that were drilled in that second week of October, and these are all now struggling as they have had continuous rain on them since then.

I can only hope for a prolonged dry spell now to allow these struggling crops to establish. I fear that there will be many fields with large patches with no crop.

The crops that were drilled in early/mid-September are well established. Most have received their post-emergence herbicide, aphicide and trace element application.

Although the aphicide may have been slightly early, I am glad they were done as I think travelling with a sprayer now will be limited to only the driest of ground.

Pre-emergence sprays for blackgrass seem to have worked well. I did see quite a lot of bleaching of crops at the time, but these have now recovered.

The grass leys that have been drilled are now generally looking well. Some that were drilled following whole crop in July were cut in early October although in some cases this wasn’t the best idea as the ground couldn’t take the baler’s weight.

It is becoming a problem to get good weed control in leys containing clover without either leaving some weeds or damaging the clover. The only really good option is sheep.

The herbal leys that have been drilled have come up looking good. The chicory and plantain certainly show themselves very quickly. It’s going to be interesting to see how these perform over the next few years.

The only crop left to drill now is some winter beans on some lighter ground. These will, hopefully, be drilled in the next couple of weeks if the weather allows. They will be sprayed as soon as they are drilled.

I hope when I write next we will have had a period of settled weather to allow all the crops to get sprayed. Otherwise we face playing catch-up next spring.

The challenges of 2020 keep on coming, with October struggling to string together any more than three consecutive days without rainfall.

However, focusing on the positives and on the back of lessons learned in 2019, autumn crop establishment has progressed reasonably well and is a long way ahead of this time last year.

The fact that we have had little option other than to delay drilling meant we have seen the germination of large populations of grassweeds, both blackgrass and ryegrass, which have been controlled pre-drilling with glyphosate.

With the difficult weather this has made pre-emergence residual applications challenging. Where they have gone on, the cooler soil temperatures and moist seed-beds are providing the conditions to, hopefully, maximise efficacy.

The news is not all positive, however, as there remains a significant drilled area that has emerged with blackgrass, now at the leaf one stage and yet to be sprayed.

In these situations, increasing the rate of flufenacet applied to 360g/ha and adding in residual partner products that offer some contact activity, for example picolinafen and prosulfocarb, should help get things back on track.

The main barley yellow dwarf virus vectors, bird cherry oat aphid and grain aphid, are very visible in earlier drilled cereals. In most cases, T-sum 170 has been reached, which is when the second-generation offspring of the original winged colonisers is produced and starts to move away from the plant originally colonised.

These crops have been treated, but will be monitored closely along with later sown crops, which will be particularly important if we end up with a mild November/December.

High rainfall has led to increased phoma lesions which are now reaching the 10% threshold within oilseed rape. Smaller backward crops are being concentrated on for treatment, as these present the shortest distance for the disease to travel to create stem infections.

On larger crops this is a slower process. However, they will still be treated once at threshold as, if left to develop from leaves and into stems cankers, these cankers will cause significant yield losses by restricting the movement of nutrients and water up the stem, leading to premature ripening and potentially high levels of lodging in the crop.

At present light leaf spot remains a low risk in the region based on forecasts. Monitoring through inoculated leaf tissue tests will help to diagnose the disease and the necessity to treat through the winter.

With falling soil temperatures, propyzamide timing will need to be monitored for grassweed control. Earlier drilled crops with large canopies will be left until the colder weather has opened up the canopy to gain better coverage. This will be especially important to further enhance control of poppy, mayweed and groundsel if using aminopyralid.

What would a Crop Watch be without mention of the weather. October has been grim and 125mm is common across the region.

The consequence of this is the tell-tale signs of ploughs being closely followed by power harrow combinations bravely trying to finish the autumn drilling.

In truth, we are in better position this year than last and the mild weather has helped emergence for the early drilled crops.

Pre-emergence herbicide damage is easy to see, with bleaching from diflufenican complementing the waterlogged areas. In my part of the world, the remaining spraying that needs doing is firmly in the “hope” category.

Manganese is always a threat to cereals on the prone soils, and I firmly believe that getting a spray on this side of Christmas is vital.

Barley yellow dwarf virus is a hot topic, with aphid catches very low as the weather has been atrocious for migrating aphids. I will keep a watching brief, but I feel that anything emerging from mid-October onwards will not need spraying.

As much as I enjoy receiving the Corteva email telling me “it is now cold enough to apply Kerb”, it normally arrives when there is no chance of spraying, except with a hovercraft.

In this part of the country and further north, late October/early November is ideal.

There is also much agonising over the dilemma of treating light leaf spot. Varieties with resistance ratings below 6 and areas with known history of the disease will receive a reduced rate fungicide. The rest I will monitor and tackle in the early spring.

Whatever happened to cabbage stem flea beetle? Last year even the hint of a cotyledon was ferociously munched.

This year, thankfully, the pest has only been a problem on isolated areas. Despite the essays and essays written on the companion crops, slurry and stubble length required to defeat the pest, good seed-beds and moisture are the primary requirements.

Winter barley crops have started to take up their usual winter colours of pale yellow. Forward crops are now showing good levels of mildew. I only worry about this if the infection is on the emerging leaf, but even then it is a low priority for treatment.

There are also some very healthy levels of net blotch in the mixed spring and winter barley crops. This could really be a challenge next year and will test the chemistry portfolio.

There is some damage in the winter wheat crops due to the heavy rain and once again some fields resemble a chequerboard. Crops drilled in late September appear to be the worst affected, with the 75mm of rain falling on 3 October arriving when the seed was most vulnerable.

Most fields have received an autumn herbicide either pre-, peri- or post-emergence and initial control looks good. Volunteer beans are certainly an issue in many crops, but florasulam or tribenuron offer cost-effective solutions.

Overall, as the winter hibernation approaches we are in a far better position than last year, although a few more dry days would be nice.

I had hoped that this year the weather would be better, but my rain gauge is showing more rain this month compared with last year.

Let’s hope we get a drier and much more settled November, to allow the completion of field work before winter really sets in.

With most of the winter cereal area now drilled, farmers are taking their chances where possible to deal with winter bean planting. After an average to poor harvest, winter beans are in the last chance saloon on many farms.

To stand any chance of achieving their yield potential, focus needs to be placed on good establishment. Winter beans never do well in overworked, compacted or waterlogged seed-beds.

So it has been encouraging that, despite the wet October, undisturbed cereal stubbles remain remarkably dry underneath. Direct drilling to a depth of 15cm is working very well in these conditions and in turn will help the bean plants cope better in a dry spring. 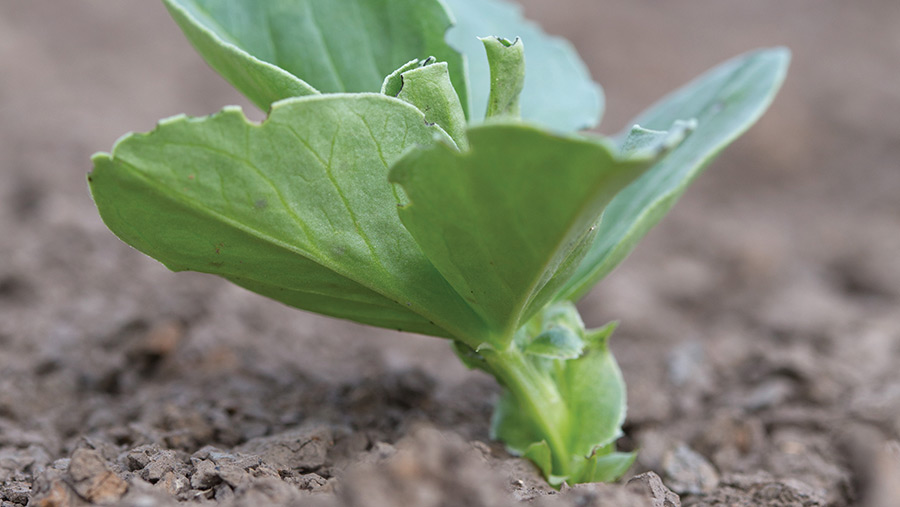 Early drilled wheats are reaching their t-sum accumulation of day degrees above 3C and will be receiving their first aphid spray in the returning war on barley yellow dwarf virus in cereals after the loss of Deter (clothianidin).

In this area of England we do normally see warmer temperatures going into the winter. This could lead to some crops getting two insecticide applications in total.

The colder the better, as cool moist soils should ensure root uptake by emerged and germinating weeds, especially blackgrass, ryegrass and bromes, from application until well into the early spring.