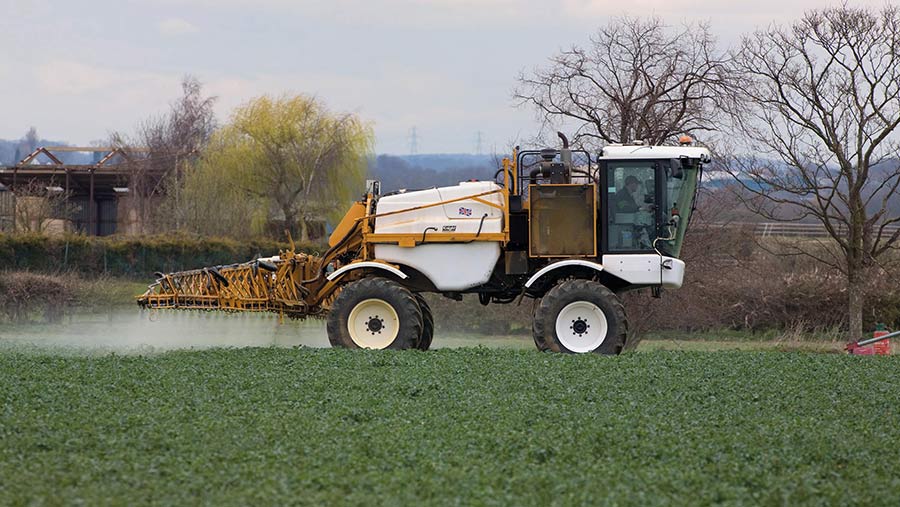 A warm mild autumn means there is more mildew in evidence this autumn in Scotland. The small amounts of net blotch and rhynchosporium in winter barley will need monitoring and may mean a T0 fungicide spray could be required next spring.

Soil temperatures have been falling, but they remain too high for optimal efficacy of propyzamide in OSR crops. Growers are being reminded about the need to minimise run off into surface water.

The past couple of weeks have been very unsettled weather-wise, and we now have reached a stage where the opportunities to travel across fields are few and far between. There is a bit of slug activity noticeable in the later-sown wheats, and fortunately a quad bike can usually get on.

Other outstanding sprays are looking less likely to be applied, and most of my growers have not yet managed to apply Kerb (propyzamide), although it is still almost too warm for optimum efficacy. On the plus side, later crops have grown quickly and have almost reached the two-leaf stage.

There is more mildew in evidence this autumn, and with daytime temperatures sitting around 10C, this disease will remain active in both wheat and barley. Small amounts of net blotch and rhynchosporium in winter barley do not require action, but should be monitored after the turn of the year, to assess the need for a T0.

There is far more action in politics than crop production at present. COP26 attracted a lot of attention but whether it will result in any real change remains to be seen.

There seems to be a resolute determination to blame agriculture for the world’s ills, in my opinion, so we now have global farmer-bashing rather than the customary local level, as everyone tries to find a scapegoat other than motor vehicles or jet engines.

It is welcome news that the Scottish Government Rural Payments and Inspections Directorate has announced a full Agri-Environment Climate Scheme next year. The options for arable farms tend to involve field margins and awkward corners, but the stubble followed by green manure can slot in very well as a break crop.

Fertiliser prices remain a major area of concern and we are now looking at 40-50kg/ha reductions in N as a breakeven point for wheat. This level of reduction will undoubtedly have some impact on yield, although this is still at the flatter part of the response curve.

My suspicion is that most growers will not cut back that far, and of course it is only those who are buying their nitrogen at current prices who have to consider scaling back to this degree.

As autumn draws to a close there is an air of satisfaction as crops are establishing well and the autumn workload is almost complete.

Generally soils are in good condition and well-structured; further adoption of minimum tillage practices have been successful, often creating very friable seed-beds, although dealing with large amounts of residues from last year’s crops has proved challenging in some cases.

Where heavy pre- and peri-emergence herbicide combinations have been used, fast growing crops are often showing transient discoloration. However, where field conditions are good these crops are recovering in just a few days.

Grassweed populations appear worst where the pre-emergence was delayed and applied after the grassweeds started to emerge.

In dirty situations, kinder autumn conditions may allow post-emergence contact follow-up sprays with or without a residual “top up” as appropriate.

When using contacts, remember that they have to go on to a dry leaf and need at least three to four hours drying time. Realistically there is only the chance for one or two tank loads a day when the conditions are right.

Crops should be individually assessed for their barley yellow dwarf virus spray strategy and manganese requirement, and applications completed ahead of winter. Slug damage is reducing as soils cool, but continue to monitor problem areas, particularly after oilseed rape or on aforementioned seed-beds with high trash levels where there is less consolidation.

In rapeseed, appropriate conditions for the completion of propyzamide sprays are approaching. This active works best when soils are cool and moist and it is held in the top few centimetres of soil.

However, applications should be stewarded to minimise run-off into surface water; in particular, applications to waterlogged soil should be avoided. This timing also provides an opportunity for phoma and light leaf spot control, but if mixing residual grassweed herbicides with a fungicide, remember you will need to apply to a dry leaf.

Cover and catch crops are also benefiting from the good growing conditions as they continue to increase in biomass, help to restructure soils and contribute to the purpose for which they were selected.

Nitrogen availability and pricing has focused our minds on final cropping choices and nutrient planning. Growers who did not secure their full requirement earlier and face high pricing are considering spring cropping options with a lower N requirement, including pulses and fallow.

Be mindful not to overburden the rotation with pulses and shoot yourself in the foot for future years. N strategies should be planned now with a review of total N dose and the likely economic optima.

Give consideration to traditional and alternative N sources and improving nitrogen use efficacy before making adjustments. These plans can be tweaked in early spring according to crop growth and weather conditions.

The autumn has been kind in our region and we have got all of the autumn crops planted into good conditions, even the wheat after maize and potatoes. Generally even these late-planted crops have emerged well.

In the damp and mild recent conditions slugs have required repeated treatment, especially in patches in unrolled fields. Whether to roll or not is always a tricky decision, especially on crops drilled mid-October onwards.

If you roll and heavy rain ensues, soils can cap and impede emergence. If you don’t, slugs can reduce emergence – as we have found out this season.

Early residual herbicides look to be doing a reasonable job, but it is early days on grassweed control and too early to assess full efficacy. There has been some transient crop chlorosis with a couple of heavy rain events, but crops are now growing away from this minor aesthetic inconvenience that is rarely detrimental to final crop output – certainly much less than a heavy grassweed infestation.

In fields with less grassweed pressure where I have used a post-emergence strategy, I have again been impressed by the extra activity of products with metribuzin,  in addition to flufenacet and diflufenican, on some difficult-to-control broad-leaved weeds, such as groundsel.

With some unexpected dry and mild November weather we will, hopefully, get some residual herbicide on some of the later-planted wheat. Those not covered will get an early spring strategy as we have some good options in wheat for annual meadow grass and broad-leaved weeds.

Oilseed rape crops are looking, in a lot of cases, almost too well, so the larger ones have received a good dose of tebuconazole, as much for its growth regulation  activity as disease control, with only low levels of phoma so far.

Soil temperatures are starting to fall, but are still a bit high for propyzamide applications. Therefore, I will hold recommendations until I see a consistent drop in temperatures. Where no growth-regulating fungicide has been applied yet, these will be treated in tank mix with the propyzamide, focused on protection against light leaf spot infections.

As we start to get to the stage of “shutting the gate” on fields, thoughts turn to planning spring strategies.

Nutrient management is going to be even more in focus with the high fertiliser prices and has already been a hot topic of discussion with those clients who don’t have all their fertiliser requirement purchased.

Some are going to try more spring application of muck and digestate to reduce the requirement for bag N and growing costs. This practice is easier with digestate when using newer application technology.

Spring poultry litter application is possible if you get good dry early spring conditions, but both need to be done before crops move into stem extension, meaning they  can depend on the vagaries of the weather in March and early April.

We have had a week of catch-up on the Downs, with only the most opportunistic drilling still to do. The Weald cereal crops are only fit now for a sprayer to complete any late pre- or post-emergence herbicides, with oilseed rape crops awaiting a fungicide and blackgrass control.

Slugs have been worse this autumn than for several years, and continue to be an issue, with some crops requiring two applications of ferric phosphate. Aphids too remain an issue with the continued mild weather and crops reaching 170 day-degrees for the second time, requiring crops to be monitored very carefully.

Overall, crops have established well into fine seed-beds and, equally, those direct-drilled into stubbles are looking well. However, hair pinning, like slugs, has been a much bigger problem this year, with a combination of damp straw and soft ground conditions not helping matters. 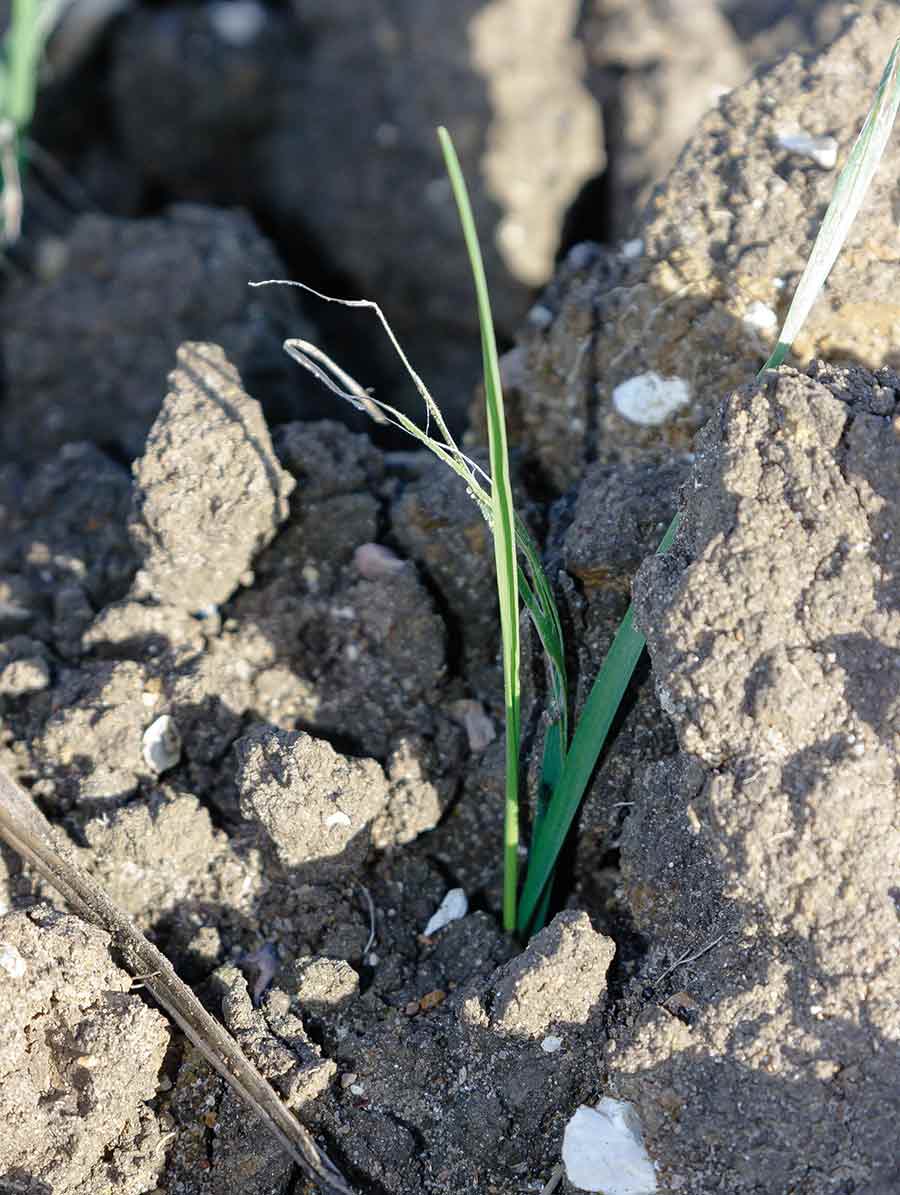 More forward crops of companion-cropped oilseed rape are beginning to show signs of phoma infection in some of the earlier plantings, which have also had reasonable levels of downy mildew for several weeks now. The aim will be to apply 0.35 litres/ha prothioconazole along with the propyzamide plus aminopyralid.

While it is still a little warm for optimum levels of control from the propyzamide, as always it will be a balance between good soil conditions to allow the sprayer to travel and the optimum soil temperature. The mildew is more incidental, and it’s highly likely the combination of a fungicide treatment and some decent winter weather will stop it developing into more of a problem.

It is possible to find flea beetle larvae easily in many of the early drilled crops of rape.

For a several years now a way of mitigating the risk of growing OSR has been to include home-saved rapeseed with a diverse cover crop. Where these cover crops don’t have enough rape plants or are not uniform, they will be seen as just a cover and there is now an opportunity to direct drill wheat into them instead, as ground conditions allow. The aim being that it will immediately receive a residual herbicide or, alternatively, spring wheat is a third option depending on ground conditions.

Although winter beans have all been drilled, finding opportunities for a pre-emergence herbicide application on very wet seed-beds has been more of a challenge, particularly where the plan had been to use pendimethalin. Given that this must not be applied to a crop which is emerging, this has caused a problem as there are now many crops just coming through and rows clearly visible. Weed control will now have to move to plan B.