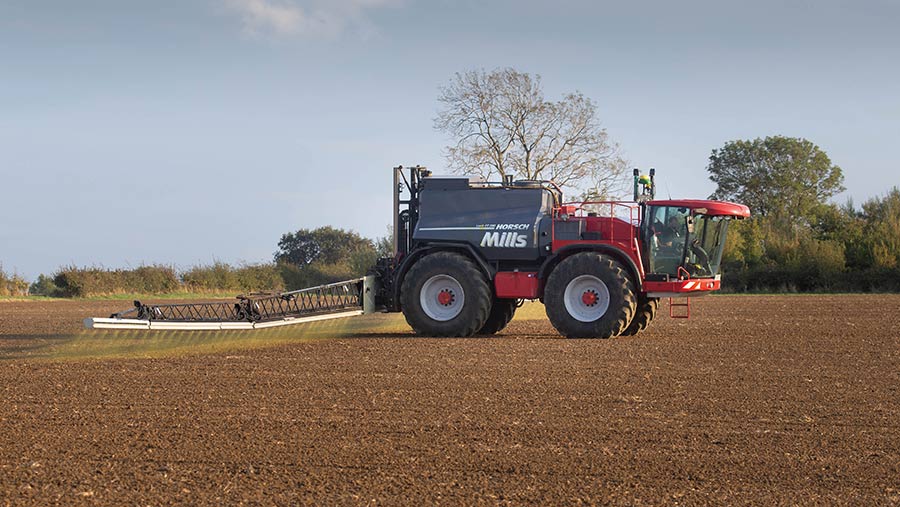 Cereal drilling has been progressing well and recent rain will help with residual herbicide efficacy. However, it also raises the slug threat.

Aphids are being seen in plentiful numbers thanks to the mild conditions and will need monitoring to manage the barley yellow dwarf virus risk.

Finally, maize yields are looking good, especially given the poor spring conditions crops were established in.

The start of the new cropping year has presented significant challenges, with the availability of nitrogen fertiliser and glyphosate being affected by global gas prices and product supply chains, respectively. Fingers crossed that’s all the bad news out of the way and that we can get a significant area of autumn cropping established in good conditions before the weather turns.

Cereal drilling has begun, with a significant area of winter barley being drilled. This year has shown that winter barley allows an early entry in oilseed rape, which has allowed the OSR to establish quickly and avoid the worst of any flea beetle grazing. Wheat has also started to go on those fields less affected by blackgrass or ryegrass.

Slug activity is clear to see, particularly on the back of recent rainfall. Well-consolidated seed-beds form a key part of an integrated approach to managing this pest.

On fields with known grassweed issues, patience has been rewarded. Recent rain has resulted in a flush of grassweeds, which will be controlled prior to drilling.

The increase in soil moisture will also help with residual herbicide efficacy. It is imperative that residual herbicides are applied pre-emergence. Where conditions allow, the drill should be closely followed by the rolls and then the sprayer, ideally all within 48 hours.

The foundations of the residual stack will be built around tri-allate and flufenacet this year. Aclonifen is also being included, particularly where ryegrass is the primary target. On fields with the highest grassweed pressure, pre-emergence sprays will be topped up with an early post-emergence.

Monitor closely for aphids on early drilled crops. With an above-average temperature recorded in mid-September, aphid flight activity, particularly of the bird cherry-oat aphid, has increased significantly, with a large percentage being cereal colonisers. Results from barley yellow dwarf virus testing have shown that nearly 20% are carrying virus. While it is normally the second generation of the original winged colonisers that typically spread the virus, timely intervention may be necessary this year.

With cooling temperatures, flea beetle activity is becoming less apparent, particularly in later sown crops or those that failed to find moisture at drilling. On these more backward crops a decision will soon be taken as to the overall viability of the crop before significant further investment is made. This is not an easy decision, given current prices, but if the crop is unlikely to reach its full potential then adopting a plan B will allow the next crop to get away early.

Disease pressure is likely to begin to increase with more unsettled weather, smaller plants being the most susceptible to phoma. These crops will also want to avoid any form of plant growth regulatory effect. Active ingredients such as difenconazole and azoxystrobin will give good levels of disease protection and conveniently can also be applied in mixture with a herbicide such as Belkar (halauxifen + picloram), as they don’t have any PGR effects.

After what was a rather slow and protracted harvest, drilling in the north has gone superbly well. I know many of you to the south of the Humber will be nodding your heads in despair at the foolishness of this.

The list of potential problems is huge: barley yellow dwarf virus, grassweeds, gout fly, disease, to name but a few.

In our defence, the number of drilling days available is considerably fewer the further north you head and the heavier the ground is. I must admit though, I did not expect to have such a good September where every day was a drill day.

My only answer to the cabbage stem flea beetle conundrum is that Brexit, Covid and driver shortages have combined to prevent the pest travelling. In an attempt to be more scientific, I can only think that the cold April (22 days of frost) played some part in preventing a build-up.

Many of my crops were drilled the first few days in August and now resemble triffids. All contact herbicides are now useless, as any contact with the offending weeds is most unlikely.

Having ridden the glyphosate shortage, I am now bumping into the “propyzamide pantomime”. The area drilled with oilseed rape in my part of the world has increased by about 15%. This will further stretch product availability.

I am informed that Astrokerb (aminopyralid + propyzamide) will be available, but there will be precious little propyzamide. Which reminds me of Henry Ford’s famous quote: “You can have any colour you like as long as it’s black.”

At the moment there is very little disease in OSR crops, reflecting the dry September, but I will be keeping a close eye out for phoma in the coming weeks.

The first cereal crops are now emerging, and we will start to see the success or failure of the early barrage of pre-emergence herbicides.

My policy for the blackgrass areas is to follow up with a further round of actives, led by an additional amount of flufenacet, and then hope.

The later drilled crops are more likely to have just one round of pre-emergence. In the fields where brome is the main threat, a post-emergence contact product will be the follow-up treatment.

The Rothamsted aphid monitoring programme has shown huge numbers of bird cherry-oat and rose grain aphids caught in the past weeks, and this will certainly have me monitoring for aphids in these early emerged crops.

Despite our pre and post-emergence spray programmes, groundsel, volunteer beans and OSR all manage to limp on. I am reluctant to target any of these before spring as the choice of product is limited and the impact on final yield of pre-Christmas removal is negligible.

We will start drilling beans in the coming few days and this again will be controlled by the blackgrass threat and the availability of propyzamide.

The thousand seed weight of beans is very high, so seed rates can appear huge, but don’t panic. Savings can be made with improved emergence with early drilling.

I have almost made it to the end without mentioning nitrogen. I have joked with some clients that if we sold the early bought nitrogen and the glyphosate we had now, the profit would be greater than from growing the crop.

I am sure that there will be a semblance of order restored in the New Year.

My advice, which is very similar to playing a roulette wheel, would be to acquire some nitrogen now, as cover. Also remember it is your average price per kilogram that is the key; if you bought half at £300 and half at £600 the actual cost of the nitrogen is £450. This would mean at the current forward prices, your theoretical requirement would hardly change.

Here we are entering the autumn and it feels like summer hardly arrived. Only lately have we had the sunshine we so desperately needed back in June.

However, one positive of the early August weather is that the early drilled OSR was put into moisture and these crops, whilst still battling with flea beetle, have established well. Many of the later-drilled OSR crops are struggling against it and our dilemma is, do we pray or use insecticides with limited efficacy?

I have been recommending a nutrient mix with the pyrethroid as a way of improving activity and boosting nutrition/rooting of small OSR plants.

Results are mixed, but there does appear to be a reduction of beetle activity for a week or so.

Observations from last year also indicate a reduction in larvae appearing in stems later in the season.

Winter wheat drilling is under way on fields relatively free of grassweeds. The less clean fields will follow soon, so it is essential that residual herbicide plans are carefully thought out.

The success of a residual herbicide programme depends very much on factors other than the products we are using.

Locally, the chances are that we will now have good stale seed-beds and be able to produce firm, fine, level seed-beds to ensure maximum efficacy of the residuals.

If you have been disappointed in the past with residual herbicides you may well be looking at other, newer, options. However, given the marginal gains some products are offering, you may do better to check your spray application process.

The speed you travel at, how high your boom is, the nozzle you are using at what water volume – you may well find that attention in this area will give a significant uplift in residual herbicide performance.

So here we go again. Harvest is behind us and that’s a good thing, as generally it wasn’t one to write home about.

It was an average year for yield and quality, but given the season that’s probably good.

There has been much said in the press about certain varieties under-performing and all I will say is that in some cases they did and in others they didn’t, so no real conclusion can be made and they have been given the benefit of the doubt for another season. Only time will tell if this was the correct decision.

As for this season, drilling has already begun in earnest and most cereals that are not going in behind maize have been drilled.

There have been some supply issues that have held up drilling, but on the whole this has been a good thing because drilling second wheats in the third week of September really isn’t a good idea.

We have had the perfect storm for processing cereals, a late harvest, and then good weather in September. Add to this transport issues and you have farmers waiting for seed.

Thankfully, the seed is now there and we have a forecast of good weather, so happy drilling will resume. 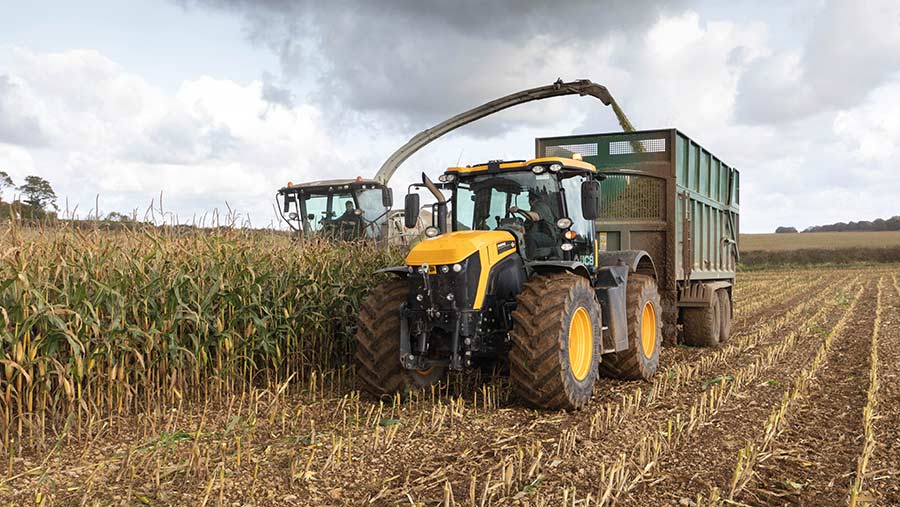 Pre-emergence sprays of flufenacet, pendamethlin and diflufenican are on farm for those with blackgrass or ryegrass problems. Some Avadex (tri-allate) has also been applied on the worst farms.

The maize is coming off although some has been harvested too early and I really wonder why you would spend all that money on a crop only to harvest before its full potential.

There is a huge amount of talk of cover crops going in behind maize and I think generally most farmers now appreciate that a bare maize stubble left over the winter is not a good thing.

There has been an increase in undersowing of maize with grass this year and on the whole it looks very good. We had plenty of rain to get the grass germinated well.

The yields on the maize look to be good and, considering the ground conditions in the spring, this is surprising.

The later drilled early maturing varieties have caught up with the early sown maize. With some farms having drilled maize over a seven-week period, it looks as though there is probably only about seven to 10 days difference at harvest.