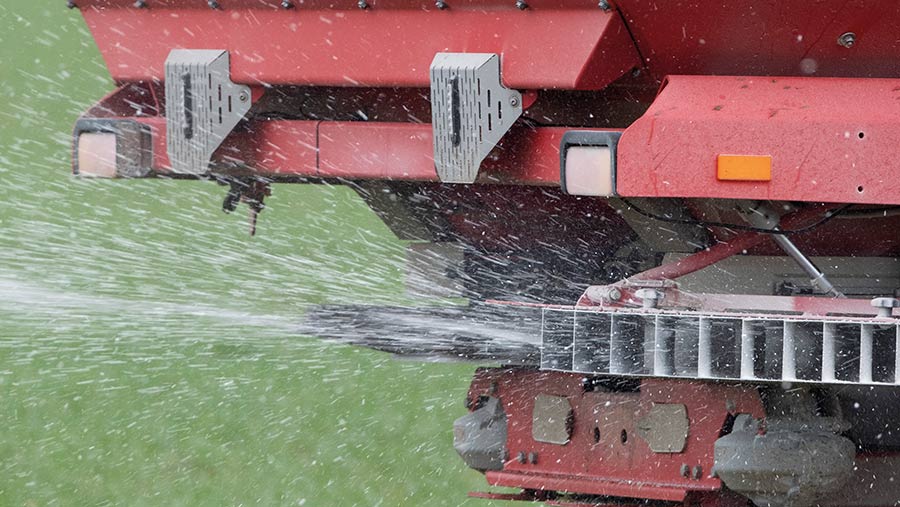 Recent rain has been welcome for crops struggling through the long spell of early spring dry weather, although it may herald an increased fear of disease in the coming weeks.

A decent level of rain will be needed to wash fertiliser into the ground to improve crop nutrition levels, as some crops have virtually stood still during the cold and dry April.

If the rain leads to a sudden spurt of growth, agronomists will have to think through their approach to plant growth regulators (PGRs), which they have been holding back  in the dry weather for fear of increasing the stress on crops.

I’m writing this on bank holiday Monday, and it is finally raining. Locally, most autumn-drilled crops still have roots into plenty of moisture at depth, but they’ve been restricted by having their shallower roots and their past two dressings of nitrogen fertiliser sat in dry soil near the surface.

Hopefully, we will have enough rain over the coming days to get these top few inches of soil nice and moist, at the very least, to get the nutrition flowing into these crops.

Winter oats have pretty much sat still over the past few weeks with the dry, cold weather. Now, with a bit of rain and the weather forecast to warm up, I expect these crops to grow away quickly, racing through their growth stages to catch up to where they should be at this time of year.

I left broad-leaved weed control out at the usual T1 timing on a lot of winter wheat this year as the weeds just hadn’t flushed at the time due to the dry soils. Now, with moisture in the soil, I am expecting a flush, which I will have to take out at T2 in places. Remember that this later herbicide application timing will limit product choice due to label restrictions associated with latest growth stage at time of application.

Weed control programmes in sugar beet have been frustrating in conventional crops to date, with varying emergence of both crop and weeds, leading to parts of fields being sprayed where weeds are up and growing, but leaving areas where there is either no weeds, or the crop is still too small and vulnerable to take a herbicide, especially with recent frosts thrown into the mix.

Weed control in Conviso Smart beet crops are still a way off starting, giving good time for all weeds, and weed beet, to flush before we control them. This proves that the simplicity of the concept will again surpass conventional chemical control in a tricky spring.

At the time of writing, we are having the first meaningful rain in at least a month-and-a-half. This means that challenging spring weather is once again doing its utmost to upset the growing season.

The extreme dry weather has been combined with a period of much colder-than-average temperatures. The upside is that we have not experienced the extreme soil moisture loss that happened 12 months ago but, on the flip side, crop growth has been slow and some agrochemical applications have put the crops under stress.

The west of the region appears to be more severely affected by the lack of water, which is unusual, as under normal circumstances, the further west you go, the wetter it is. Some crops on light soils have started to shed tillers as a result of moisture stress and those that haven’t are still not growing as you would expect at this time of year.

The lack of rain has meant that most crops are yet to make the most of nitrogen applications. In the drier areas, growth regulators have been pulled from the programme at T1. The anxiety now will be that the rain will bring on a surge of growth, once again raising the question whether to apply a later-season PGR to compensate for those pulled at T1.

Winter oats are the most problematic crop at present, as they have been very slow to get going compared with barley and wheat. Yet they are probably the crop most likely to require lodging control, while at the same time being most likely to be upset by a PGR application if under stress. The message is that there has been a lot of angst over PGR applications.

On the crop disease front, most crops are now relatively clean on the new growth and, with disease pressure low, fungicides are coping well with keeping crops disease free. However, a septoria event on a wet bank holiday Monday will need to be taken into consideration as we approach T2.

Many spring crop emergence is patchy due to dry seed-bed conditions. This is proving a bit challenging in fodder beet crops where the crop is only partially emerged, but weeds are coming through fast and furiously. Some spring barley fields are also looking a bit uneven, particularly where seed-beds were not fine enough.

The decision over what to apply at T2 is rapidly approaching. Disease pressure is low, but this application is often as much about what is going to happen in the next few weeks, as it is about what has gone before. Interesting decisions will be made and only with hindsight will we know whether we have made the right decisions.

A month ago, I was saying that there were areas of the Surrey and Sussex Weald that had only just become traversable after the wet winter. Those same fields are now threatening to break axles in the concrete-hard ruts left behind.

The fertiliser has gone on, but there has been limited uptake because it has simply been too cold. Add to that the lack of rain and a non-stop, desiccating north-easterly wind, and things in some places are looking a little sorry. The Met Office says last month had the coldest average April temperature for 60 years. It’s all down to global warming, apparently.

Oilseed rape flowering seems to have stopped in its tracks. This year, the hybrid varieties certainly seem to have soldiered on better through the cold, dry conditions. We’re told it should reduce the sclerotinia risk, but some of us remember 2007, which was the worst sclerotinia year I can remember, despite no rain at all from the beginning to the end of flowering. With OSR prices the way they are, I’m not taking any chances.

Some winter barleys have their flag leaves fully emerged, but the crop is lower than welly boot height. I daren’t even mention PGRs to growers who rely on the straw. Lots of winter wheat is showing a wonderful yellow tinge that is definitely not yellow rust, despite what the paranoia brigade is shouting. What these crops need is a little bit of rain (enough to wash the nitrogen down to the roots) and some decent, warm growing weather.

Spring-drilled crops actually look very healthy. Mostly they have gone into good seed-beds with adequate moisture and have come up evenly. There may be a change in the weather on the way that will make us all feel a lot better. 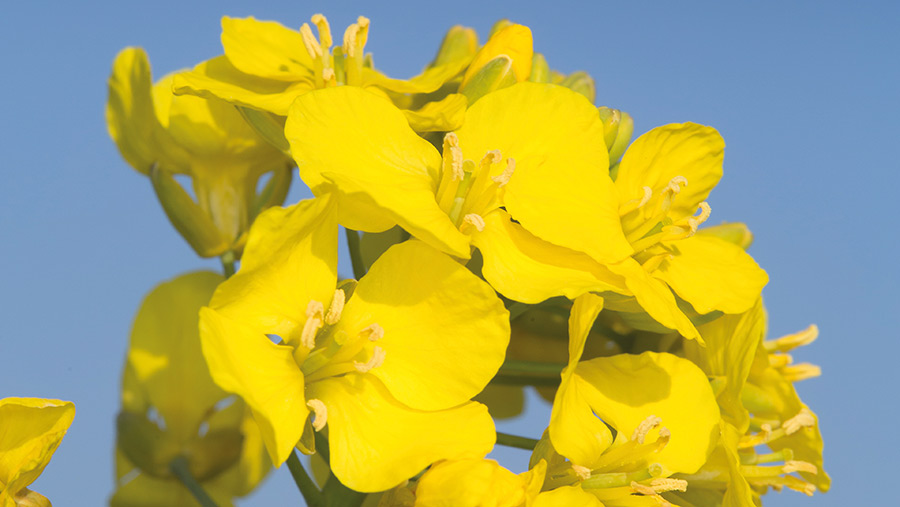 April proved to be extremely cold and dry. Multiple frosts were accompanied by chilling daytime winds that took their toll on crops. Plants changed colour from the usual green to various shades of yellow, brown and purple.

A combination of frosts, drought, fertiliser scorch, compaction and spraying amid frosts all contributed to stressed crops. Now that some rain has finally arrived, the situation will begin to improve.

In winter wheat, T1 fungicides are currently being applied. Fungicide programmes are looking different this year with the loss of chlorothalonil and where no epoxiconazole is on farm. Yellow rust has been well controlled by the T0 fungicide and the recent frosts have helped to slow its development.

However, the threat from yellow rust remains, so there has been no complacency when deciding the T1 fungicide mix.

Septoria tritici pressure has been low throughout April. The risk will have increased now that unsettled weather has returned this week.

The fungicide chemistry available still favours a more protectant – rather than eradicant – approach, so timely applications are crucial to achieve the best efficacy.

Winter barley crops are all over the place in terms of growth stage, plant population and quantity of biomass. The better-looking, more forward crops now have flag leaves emerged and are receiving some late-season PGR.

Barley crops sown into difficult seed-beds in October have been struggling, so it is a case of wanting them to actually grow at all rather than reduce plant height. T2 fungicides will soon be applied once the awns have emerged.

Flag leaves are also emerging in winter rye crops. Like winter barley, some are thriving while others are surprisingly thin and backward. It is difficult to decide how much more PGR to apply to rye crops.

Their final height can be significantly more than what appears now. Suffice it to say not all crops will require late-season growth regulation, and the better crops are likely to require lower rates compared with previous years.

Some crops of oilseed rape have been significantly affected by the recent frosts, while others appear unharmed. Some flowers have unsurprisingly failed to set pods during this time, although the level of pod abortion has not been as high as expected.

The OSR plant has the capacity to produce twice the number of flowers than it can set pods, so yield potential is unlikely to be reduced in most cases. The risk from sclerotinia so far has been low, with the cool and dry conditions not favourable for infection. Therefore, fungicide applications are being delayed for the time being. Seed weevil numbers are also currently low.

Pea and bean weevils have been very active on emerging spring bean crops. Damage has been highest on cloddier seed-beds and on wold soils. The U-shaped notches were numerous even before a plant had the chance to fully emerge. Insecticides have been applied for their control and so far have worked relatively well, despite what seems to be an increasing level of insecticide resistance in the weevil population.