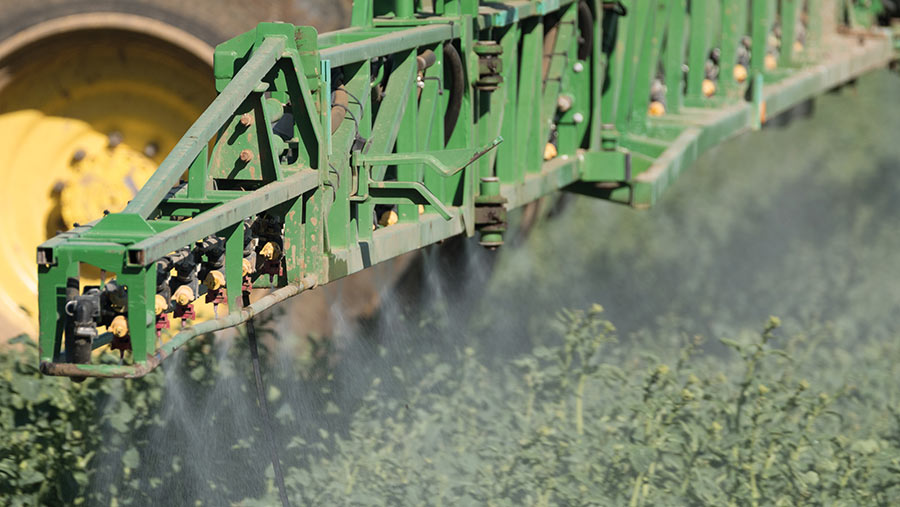 Septoria and yellow rust can be found in some wheat crops, while in the west, there has been plenty of mildew through the winter.

Oilseed rape crops are moving into stem extension, which is causing some timing headaches where weeds still need treating.

See also: Wireworm in potatoes is worsening – how growers can tackle it

Cereal biomass largely reflects the sowing date, but most are well tillered with good yield potential.

Hopefully, drier conditions will enable seed-bed preparation so that drilling of spring crops will be in full swing this week.

Winter cereals and OSR have received their first dose of nitrogen and sulphur. Generally nitrogen doses have been robust since soil conditions are moist and good for plant uptake; this should encourage early canopy build.

Later applications for 2022 will be scrutinised and adjusted according to field conditions and crop growth.

Going forward, nitrogen strategies and fertiliser planning will need some careful thought as we better understand the full impact of the situation further east on availability and pricing for next season.

As commodity prices change, continue to plan your agronomic decisions against updated gross margin projections. This is tricky and unprecedented – the best decisions will be tailored to your own business.

September and October drilled wheats will approach growth stage 30 (ear at 1cm) towards the end of the month when a split of the plant growth regulator (PGR) application, micronutrition and early disease control (T0) is planned.

The T0 is now focused on rust, mildew and eyespot control.

Many of our varieties are susceptible to rusts, which can already be found in some crops alongside septoria.

Disease progress and the shape of their epidemics will largely depend on the weather during April and May.

Where necessary, early spring post-emergence grassweed treatments are under way and will be completed soon.

Disease levels in winter barleys should be checked. Crops carrying significant populations of early disease (such as rust) may require a T0 fungicide.

However, the first robust treatment will be at GS 30-31 (early stem extension) when appropriate applications of fungicide, PGR, micronutrients and broad-leaved weed control (if needed) should be applied.

Any spring weed control in barley should be completed before the crop meets in the row and shades the target.

But if post-emergence weed control is still necessary these applications should be timed before early bud and/or canopy closure.

With PGRs, the impact on crop height is greater at green bud. Later applications may have more impact on the architecture of the canopy.

We may have passed meteorological spring on 1 March, but we have already had a couple of false starts with the spring workload.

In mid-February, fields were drying out well and then a week with two storms put paid to any thoughts of first fertiliser/digestate/muck applications or contact grassweed control.

I am relieved that nutrients weren’t applied, given the 4in of rain we had in our area in the second half of February, as these would probably be on their way to Chepstow.

OSR crops are really starting to move into stem extension, which is causing some issues where we have some final weeds to deal with.

Having had no real settled weather since 1 March – and unless this materialises by the time this article is printed – some of these will have to be cancelled.

I have some crops with large green area indices as they are the only arable crop where you can justify autumn muck applications.

We are significantly reducing bag fertiliser inputs, in some cases to less than 50 kg/ha of nitrogen, to make any savings we can of this valuable commodity.

Caryx (mepiquat + metconazole) will also be applied as soon as we get a weather window.

Samples sent to Adas for Bayer’s spotcheck initiative have shown light leaf spot present at 3-30%, so prothioconazole will be added to protect against further infection – even more justified with the rise in crop value.

Winter wheat crops have carried quite a lot of mildew through the winter in all varieties, even Extase.

While this has browned off and become inactive in recent cooler weather it will be quick to liven up again as soon as milder conditions prevail.

Septoria, our familiar enemy, is developing on the lower leaves again across all varieties. I haven’t found any yellow rust in my crops, even on likely candidates such as Zyatt and Gleam.

However, I have heard plenty of reports from fellow agronomists on Skyfall and Crusoe, which are not grown as much in region dominated by feed wheat.

With the lamented loss of actives, T0 decisions tend to require a greater spend as there are few cost-effective mildewicides or multisite protectants, although some testing of the elicitor Laminarin last season found it effective so this will be used more widely this season.

The forecast suggests some warmer and possibly more settled weather so contact grassweed herbicides will be prioritised and Proverb (iodosulfuron + mesosulfuron + thiencarbazone) will be used where ryegrass is the main target.

Volunteer beans that have been doing a good job of fixing valuable nitrogen will also need to be taken out soon. If we get the opportunity these will be done before the T0s to minimise complicated tank mixes.

Winter barley crops are well tillered moving towards growth stage 30, and the leaf area has taken its typical yellow hue, especially since the rains, so are having first fertilser split.

Again they have carried plenty of mildew.

Hybrids have some brown rust and rhynchosporium is starting to develop on many varieties.

Early PGR and fungicide are arguably more important on winter barley than other crops to keep tiller numbers to maximise yield potential, so these recommendations will be going out the week this article is printed.

It feels rather parochial to worry about crop development when Ukrainians are worried for their lives, but it may well be that our national food supply is affected by the war, and we could need every grain we can produce.

Certainly the impact on wheat and fertiliser prices has been dramatic, and it is hard to foresee how far the upward trend will go. As long as the conflict continues, we must expect disruption to supplies and volatility in prices.

Our own autumn-sown crops have come through the winter well, and many growers have applied the first nitrogen dressings to OSR and winter barley.

Some of the backward wheats (there are not many of those this season) have had a small application to kick-start spring growth and get sulphur on.

Oilseed rape crops are coming away from pigeon damage, and the green buds are visible.

The application window for broad-leaved weed products Dow Shield (clopyralid) and Korvetto (clopyralid + halauxifen) will be very short, and crops needing a herbicide will have to be monitored carefully to ensure the cut-off timing is not passed.

There is very little light leaf spot in evidence, but with the current price of rapeseed, many growers will consider an azole treatment a worthwhile expense.

Winter barleys are still rather yellow and hungry-looking, but the disease levels are not as high as I expected after a relatively mild winter. Nitrogen, sulphur and manganese will give these crops a boost.

Wheats are also looking good, and many are almost too proud.

There has been a lot of chat locally about grazing these fields with sheep, but I have not spotted anyone putting this old tradition into practice – probably because of the lack of stock-proof fences.

Disease levels are very variable and variety dependent. I have seen some yellow rust already in East Lothian, although not in a mainstream variety; and a fair bit of septoria.

I see no reason to omit a T0 this year – there is too much disease, and even a small yield response will more than pay for the treatment.

Weed control is holding up well, but I suspect this will change in the next few weeks, and in any case groundsel will need to be dealt with.

It has become the local nuisance weed since the autumn Lexus options were withdrawn. 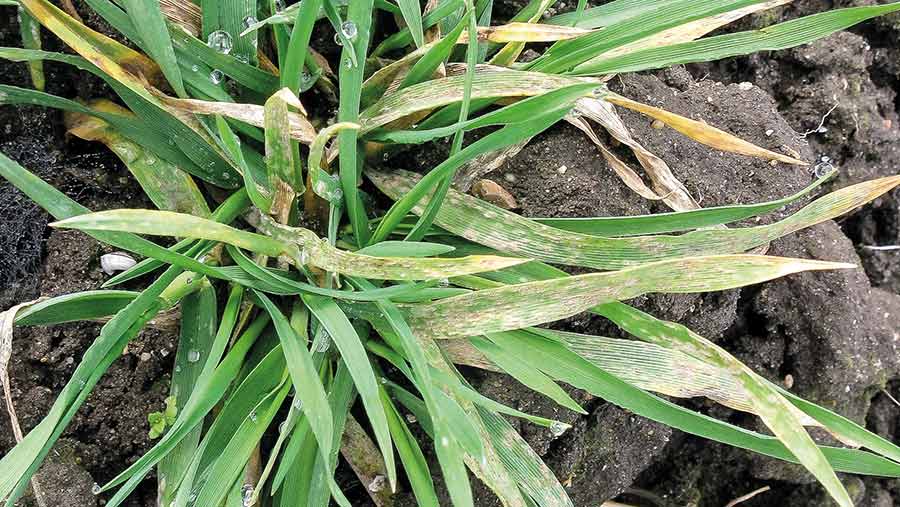 A drier week has allowed growers to start spring nitrogen applications, even on some of the heavier Weald clays, so spring has officially started.

With some warm weather forecast for next week, crops will really start to move.

Early September drilled wheat crops are entering stem extension, although the first node is likely to be a “false node” and likely not indicative of subsequent leaf emergence.

Therefore, applications of PGRs to strengthen the stem base will start soon on these crops.

Winter barley crops are moving more quickly and will receive 0.5 litres/ha of tebuconazole plus prothioconazole with PGR around GS30, given the levels of brown rust and mildew found in many crops, especially some hybrid varieties.

Later-drilled crops that are not so advanced and where levels of disease are not so apparent will allow the first applications to be delayed until around GS31, to avoid the requirement for two relatively quick successive passes through the crop.

Light leaf spot is being readily found, with a fungicide being prioritised on these crops. If light leaf spot management alongside canopy management is required, Toprex (difenoconazole + paclobutrazol) will be used for its PGR benefits.

Those crops that the pigeons have grazed heavily will take a little time to recover, and they will require monitoring for pollen beetle as they slowly gain ground.

Disease in wheat so far seems to be dominated by the presence of septoria over yellow rust, but rust has just started to appear in the more suspect varieties such as Skyfall, so a timely T0 fungicide will be applied.

The danger comes if the T0 is applied too early, as there is a risk of ending up with too large a gap between T0 and leaf 3 emergence at T1, allowing the yellow rust to reinfest the crop.