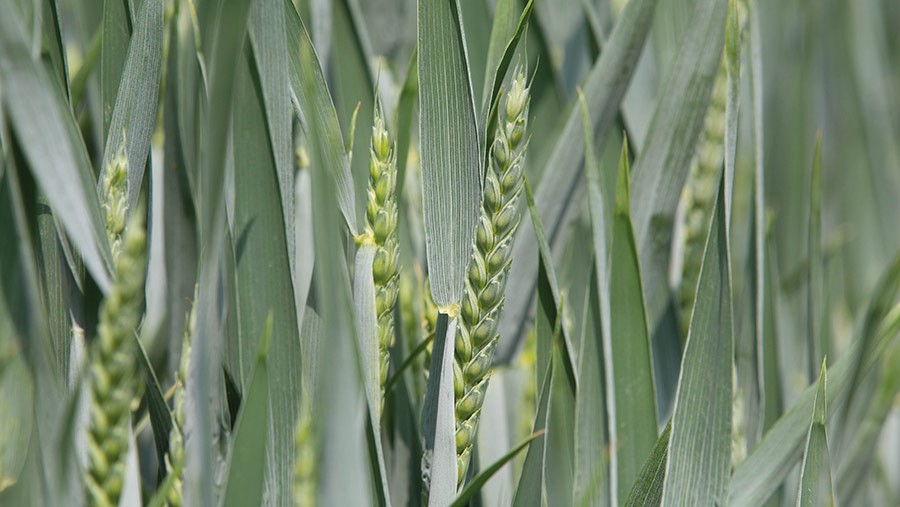 Autumn-sown crops are racing ahead through their growth stage, while spring-drilled ones are still largely short of water and could do with a good rain shower or two.

Yield potential on winter barleys and wheats is good, and the hope is that there is good sunlight over the coming weeks at the key grain-filling stage.

Occasional showers have provided just enough rain to wash in some nitrogen fertiliser, however uptake of this key nutrient has still been sub-optimal so far.

Spring-sown cereals, especially those on heavier land, are now struggling due to lack of moisture. Early-sown wheats and most winter barleys look particularly well, while oilseed rape looks full of potential.

Flag leaves are fully emerged on earlier winter wheat crops and T2 fungicide mixes are being applied. For Septoria tritici control, the main fungicide active ingredients being used are either mefentrifluconazole or fenpicoxamid.

Considering it has been dry for so long there are obvious Septoria tritici lesions on the older leaves, a sign that heavy dews and leaf rubbing have still allowed some disease development.

There are noticeable differences in the levels of Septoria tritici due to sowing date, as well as a variety’s susceptibility to this disease. Yellow rust has been well controlled by earlier fungicides.

However, spray misses around telegraph poles or on headlands are providing a stark reminder of how quickly yellow rust can develop.

Some late season plant growth regulators are being mixed with the T2 fungicide where necessary.

Winter barley crops now have ears emerged and look particularly well as the awns ripple across the field, a sight I never tire of.

Their spring-sown counterparts, though, are struggling, especially those sown later on heavier soils where establishment has been patchy.

Pre-emergence herbicides have struggled to work well at controlling blackgrass in the prolonged dry conditions. The problem has been exacerbated by a lack of crop competition due to poor tiller development.

Broad-leaved weed emergence has also been slow, which is making herbicide timings tricky. Usually herbicides are applied just before crop canopies close across the rows to prevent further weed emergence.

This year many crops are too thin and will not close in, which may allow some late weeds to appear. T1 fungicides are beginning to be applied to spring barley crops and mixed with herbicides where required.

Spring oats seem to be coping better with the dry soils compared with spring barley.

Earlier-sown spring oat crops are now at GS31 and plant growth regulators are being applied along with a fungicide for mildew and crown rust control on certain varieties.

Oilseed rape crops are coming towards the end of flowering. Pod set has been good and most crops received a second sclerotinia fungicide due to a prolonged flowering period.

Seed weevil numbers rapidly increased after mid-flowering and where an insecticide was required, it was able to be mixed with a sclerotinia fungicide.

Winter beans are now flowering, with high levels of downy mildew present in some fields. Chocolate spot levels are confined to odd lesions so the pressure has not been too high yet.

Spring bean crops have coped well despite the dry conditions. Volunteer oilseed rape and charlock are the main weeds that have emerged and are currently being controlled with the herbicide bentazone.

With new season nitrogen fertiliser prices released there are some interesting conversations regarding cropping choices for harvest 2023 and consequently how much fertiliser to purchase.

Increased input and fuel costs and volatile crop prices could see some significant cropping changes for some, while others will not change and continue to do what they do best whilst adjusting fertiliser rates accordingly.

Spring cereals are now starting to race through their growth stages. The lack of rain has held back the chit of broad-leaved weeds that are usually controlled around the T1 fungicide timing.

Recent showers have now, in most places, moistened the top few inches of soil enough to promote a flush.

When taking these weeds out, attention will need to be paid to the crop growth stage and the product label to ensure that individual product cut-off timings are not exceeded.

Having mentioned showers, here in the East, although we have had only the odd shower, the majority have had a token amount, and plants in many cases are still stressed from drought.

Herbicides are not as effective on drought-stressed weeds, and can add to the pressure on already stressed crops.

Ideally manage herbicide applications to use higher water rates, and ideally lone application, rather than in big tank mixes for both efficacy and crop safety.

Prolonged crop emergence in some conventional sugar beet crops due to dry seed beds has made for interesting weed control this season, with some fields having to be split so that weed control on forward parts is done separately to those still emerging, both to make sure weeds don’t get too big on the forward parts, but also to protect the smaller emerging beet from the larger stacks of chemistry needed on the forward weeds.

Conviso Smart sugar beet will now be getting its single application of the Conviso One herbicide, which has given fantastic control of weeds in the past two seasons.

Thiamethoxam-treated sugar beet will now be coming to the stage where control of aphids from the seed treatment is running out.

Regular field inspections are needed to monitor for aphids, and treatment with flonicamid will be necessary should thresholds be reached.

Before I write my Crop Watch, I like to look at what I wrote last month. It is normally a sobering reminder of how useless I am at trying to predict the future.

Nearly all my elations turn into problems, and most of my worries turn out to be unfounded. Oh well.

Despite my last month’s groanings, winter barley is now fully in ear, and looks fantastic. A second fungicide is going on imminently, not a speck of disease and put to bed by the time this goes to press. Wonderful.

Winter oilseed rape is either finishing flowering after six weeks of perfect conditions, and, despite my last month’s groanings (are you getting a theme here?) the backward oilseed rape has caught up and looks very respectable.

We had our first measurable rain last night for at least a month, probably five weeks. Hopefully this will be the end to spring cereals (which, ironically, seem to have established superbly) looking so anaemic, and more importantly, might make my lawn look a bit better.

We are indeed witnessing strange times. I have crops of Graham (lovely variety) about to split the boot, having had one fungicide application with four spotlessly clean leaves.

I have crops of Zyatt (hateful variety) that has yellow rust in the treated areas, but completely clean in the triangles that the auto-switching decided to leave unsprayed.

It’s as if the application of the fungicide in bone-dry conditions has stressed the crop enough to allow the disease to come in.

Conversations are moving on to what we should be doing next year, and whether we should be spending six-figure numbers on buying fertiliser up front.

Given that I seem to be unable to predict the next month, I would suggest that I am the worst person to ask. Just keep on farming.

Dry weather continues to dominate, with some areas receiving as little as 10mm of rain since the end of March. Most areas will, however, have had a bit more than this, but really only in two main rainfall events.

This has led to relatively low disease pressure.

Despite the dry conditions, I have only seen a couple of crops manifesting clear signs of drought stress. In fact, most crops are looking surprisingly good.

The winter barley crop is looking very promising and recent rain will help ensure that grain fill will happen normally.

At the time of writing, many crops are already flowering, which is significantly earlier than most years. The winter wheat crop is also much earlier than normal, with many crops reaching GS39 a week to 10 days earlier than usual.

Why are these crops so much earlier than usual? I believe it is a combination of factors. Many crops have received a little less nitrogen than usual and this will usually cause crops to develop a little more quickly.

We have also come through a winter with very little frost and cold weather, which means soil temperatures have never fallen low enough to stop crop growth and development and have then warmed more rapidly in the spring as the starting point was at a higher temperature than usual.

Septoria continues to bubble away in the bottom of many crops, with drilling date and crop density having more of an effect on disease levels than varietal resistance.

With crop values for 2022 harvest being where they are, there are very few growers prepared to take a chance on missing out a T2 or using lower doses, particularly as this application can be as much about what the next three weeks have in store for us as what the past three weeks have given us.

The winter oilseed rape crop continues to look very promising, but I have learned over the years that you quite simply cannot judge a rapeseed crop by the way it looks.

We will have to wait until the combines start to roll to know if the promise will be fulfilled.

Supply chain issues have dominated like never before this year, with many agrochemical manufacturers failing to get product where it was needed to be in time for use.

The “just in time” production runs and delivery schedules are fine when everything else in the supply chain is working well, but when haulage is difficult, drivers are at a premium and there is a war in Europe, these finely tuned production schedules have tended to fall apart pretty easily.

I hope this will be looked at by all manufacturers and measures put in place to deliver a smoother ride in 2023.