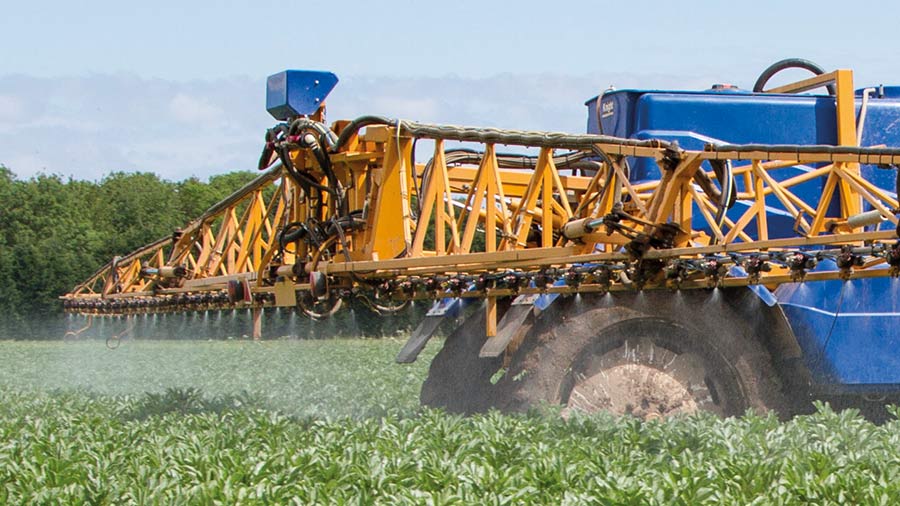 Recent rain and warmer conditions have seen a flush of weeds, such as volunteer oilseed rape, charlock and mayweed, in winter cereals. Spring pulses have also seen a flush of broad-leaved weeds and weed control is proving a challenge in sugar beet crops.

Wetter May conditions have also increased the disease risk in pulse crops, including chocolate spot in winter beans, and farmers are advised to monitor spring beans for downey mildew as they start to flower.

Well, the rain came along just in time. It was even in time to save the winter barley, which was just thinking about going into “let’s rush on and push out an ear” mode.

But it has brought with it its own problems. The return to the winter squall has meant spraying opportunities have been sporadic, and the need for those applications more important.

Having lost two of my best friends, Mr Epoxiconazole and Mrs Chlorothalonil, I champion the operators who looked out of their windows at highly anti-social times and rushed out to sneak in a tank-load or two. They are the reason why good sprayer operators are rarely out of work.

Oilseed rape crops finally reawakened when the temperatures changed from ridiculously cold to just below average.

The backwards areas reluctantly turned yellow, which has resulted in quite a long flowering period. I take this as a good sign, as the best rapeseed yields I’ve known come from OSR crops that have been flowering for six weeks or so.

The rain sparked an emergence of broad-leaved weeds in spring pulses, but it also re-activated the pre-emergence herbicides.

Spring beans that are 15cm tall and turning clomazone-white is an interesting sight. I just hope it does a good job on the broad-leaved weeds, with bentazone now prohibitively expensive again. Talk about self-stewardship…

And now the sun has come out again. There is even talk of temperatures getting to near-summer levels. What we don’t want is the searing heights they’ve reached the past couple of years that stops flowering peas and beans in their tracks.

What always amazes me is that whatever the season, conditions or drilling date around here, winter wheat is always flowering by 10 June. Regardless of growth stage or leaf emergence, we could pretty much plan our fungicide timings backwards from then.

But that would make life too easy…

All crops have significantly improved after high levels of rainfall during May. The countryside has finally transformed into lush, green cereal crops – in contrast to the yellow oilseed rape crops, which have had a prolonged flowering period.

Even the dubious “shall I keep it or sow another crop” fields of wheat have higher yield prospects compared with a month ago.

With April and May having been unseasonably cold, the natural temptation is to want some high temperatures. However, the highest yields arise when grain filling occurs during cool and sunny rather than hot and sunny conditions.

Winter wheat crops have been receiving their T2 fungicides during some good, settled weather to allow timely applications. The wet May has increased the Septoria tritici risk, which will provide a good test of the eradicant activity of the new fungicides now available.

Many T1 fungicides were delayed due to the unsettled weather, so will have coated part of the emerging leaf two. However, this may have worked out well, as leaf two will have been exposed to a lot of the subsequent heavy rainfall.

The delayed T1 fungicide will, therefore, have reduced some of the pressure of the eradicant requirements from the T2 fungicide mix.

Many winter wheat crops have had late flushes of broad-leaved weeds – in particular volunteer oilseed rape, charlock and mayweed. This has led to some more complicated T2 fungicide tank mixes, where herbicides have also been required, along with plant growth regulators.

As wheat ears begin to emerge, monitor regularly for wheat orange blossom midge activity on susceptible varieties. The crop is at risk until it has started flowering.

Spring barley crops mostly look well and have met between the rows. Herbicides for broad-leaved weeds and wild oat control have been applied, with the crop now able to smother and prevent further weed issues.

T1 fungicides have also been applied and, with the recent wet weather, the ryhnchosporium risk will have increased.

The more advanced crops will soon require a late-season plant growth regulator to reduce brackling. The levels of nitrogen fertiliser applied, variety, tiller numbers and field fertility will all be factors to consider when deciding whether any growth regulation is required.

Oilseed rape crops have improved throughout flowering. Podset is variable from the earliest flowers due to frosts. However, there seems to be compensation from the later flowers and side branches.

The crops that have looked well all season almost look too good. It will be interesting to see if these deliver the expected yields or whether the thinner and more open-looking crops perform better due to higher light penetration to the pods.

Seed weevil numbers rapidly increased during late May and an insecticide has reluctantly been applied where necessary.

Winter beans are variable with some good, dense crops, while others are thin and flowering almost from the base of the stem. These thinner crops also have the problem of late weed flushes due to lack of crop competition since the bentazone herbicide was applied.

Due to the high levels of rain during May, the risk from chocolate spot has increased significantly. Fungicides have been applied to keep this disease under control.

In spring beans the weather has also been conducive for downy mildew development, which will require monitoring as crops begin flowering. Thankfully, there are some varieties with good resistance to downy mildew that can drastically reduce the fungicide spend.

When I wrote my previous Crop Watch article, we were crying out for rain and crops were at serious risk of losing yield due to drought stress. Here we are four weeks later and our wish was granted, and then some. Some areas have recorded up to 250mm of rain. I guess the moral of the story is to be careful what you wish for.

The consequences of these three weeks of continuous wet weather has been missed spray timings and severely damaged crops in some places. Maize, in particular, has been badly hit, with some fields failing to emerge due to waterlogging.

Winter barley and wheat crops have now all received their T2 fungicide applications, but the timings have been late. Thankfully, the crops were remarkably free of disease due to the prolonged dry period that preceded the wet spell.

The next fortnight or so will demonstrate whether there was a significant amount of septoria in its latent phase within the plant or if we managed to get good control, despite the timings being delayed.

Spring barley crops are now racing through their growth stages with the sunshine and improvement in temperatures. As ever with this crop, it will be a case of blink and you miss it.

Many crops have spent most of the time since emergence in torrential rain, so it is fair to assume they will now be infected with wet weather diseases such as rynchosporium. Fungicide timings will need to be kept tight to keep on top of potential problems.

Weed control in beet crops has been really difficult this year, with the wet spell hampering spraying. This has meant weeds got far bigger than they should be to get good control. Some fairly meaty herbicide combinations will be required to get on top of the weed burden.

It will be very interesting to see what happens to the weather in the next four weeks. What else can it throw at us this year?

Now that the weather has warmed up and there is moisture in the soil, weeds in sugar beet are beginning to motor.

The slow start to the crop has lulled a few growers into a false sense of security, with first herbicides not going on to the crop soon enough, either due to reduced weather windows or increased sprayer workload, leaving a lot of work to be done on larger-than-desirable weeds.

On the other hand, delayed application of the Conviso One (foramsulfuron + thiencarbazone) herbicide on Conviso Smart sugar beet varieties has not been affected, with massive weeds, which would make any beet grower shudder, controlled with ease.

June sees the start of planning for the following year on a lot of farms. The usual decisions on which varieties to grow are starting to be made on the back of disease control this season. 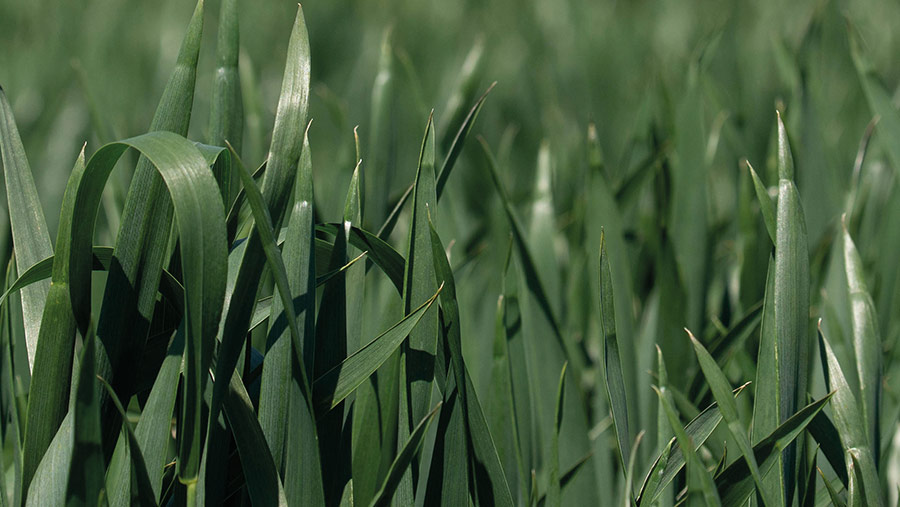 For winter wheat, growers seem to be opting for better disease resistance scores across the board, rather than just being drawn to the left-hand side of the Recommended List for the higher yielders.

Blackgrass control has been very good in some places this year, and not so good in others.

This is mostly down to the weather in the late autumn, whether any pre-emergence herbicides were applied and, in some cases, if a top-up residual went on later. Where the chemistry was applied, better control was gained.

One thing that does strike me as pertinent to mention – and it is visible in crops at the moment – is machinery hygiene at harvest. Several of the crops I look after have new patches of weeds growing in them this year which haven’t been seen in these fields before.

Some are obviously from balers, where a clump of weeds seems to coincide with wherever a bale was dropped last summer; some are patches at the gateway of a field where the combine has pulled in, and then these weeds follow the path of the combine around the headland for a few hundred yards.

I know in the heat of harvest, stopping to clean down kit after dirty fields can get overlooked, but it really pays dividends to do it.