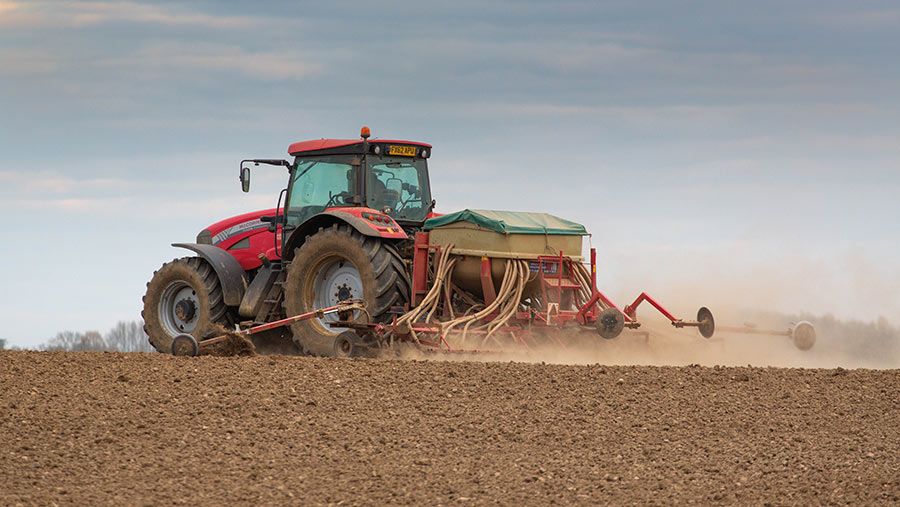 The arctic April conditions continue and oilseed rape seems to be the one crop suffering the most being frosted as it starts to flower.

Despite the cold, yellow rust remains in some areas, while in the North and South West, crops are relatively clean.

With many not receiving a T0, getting the T1 timing right will be critical to avoid too big a gap between the T1 and T2 sprays.

Spring drilling is progressing well in the dry conditions, although soils are still too cold for maize, being 3C below average for this time of year in the South West.

The cold temperatures are persisting, and as I write this article, the gritter has just gone through the village.

The spring cereal drilling has all but finished apart from some fields on marginal land or following root crops. The spring barleys are at various stages, but all that are up do look well.

There are plenty of forage mixes to drill and some have already started as ground conditions are good, but there was much conversation over whether it was too early and cold for those containing peas. Only time will tell if it was.

The winter cereals have been held back by the cold nights and north-easterly winds, the later-drilled crops have suffered the most and the growth stages of both the wheat and barley vary considerably.

Recommendations on farm are for fungicide and plant growth regulators for these crops, but spraying has been delayed due to cold temperatures and the wind.

I’m not overly concerned as the crops generally are relatively clean.

Some volunteer spring oats in a couple of fields of wheat are proving troublesome, as they have come through the autumn herbicide programme and now the cold temperatures have delayed spraying.

It’s annoying as the field next door that had volunteer spring oats in a cover crop have all died during the winter.

The fertiliser applications that have gone on in the past couple of weeks haven’t even gone from the surface yet, so as and when we do get some rain and warm weather this is going to be snapped up by the crop as it shoots away.

A strong plant growth regulator may be needed.

The oilseed rape crops that we have are a small acreage, but they have started flowering and I have to say they look promising at the moment.

Attention has now turning to maize preparations. I have heard of some maize being drilled conventionally already, but considering soil temperatures at the time of writing were averaging only 6C in the South West, I think this is madness.

This is 3C lower than the average for this time of year.

Maize under plastic (sorry, film) may possibly prove itself this year if these cold temperatures persist.

I still think that the best crops of maize year-on-year are the ones that go in the ground and come up within seven days and never stop. So drilling when soil temperature are so low is a step backwards.

As the hospitality sector emerges from its Covid-induced sleep, I am hoping that the weather gods will do us both a favour and return to some spring-like warmth.

Having escaped most of the grazing ravages of autumn adult flea beetle, sadly the larval damage is clear. Some plants that have had the main raceme destroyed by larval mining and are 40cm shorter in height.

From an observational viewpoint, this appears to be worse where some post-emergence herbicides have been used.

It sounds ridiculous as I stand hunched up against the snow-laden arctic blast, but we are rapidly approaching the point where the final pesticide application will be put on OSR.

Petal fall will be the trigger for a sclerotinia spray, and although several weeks away, it does mean shutting the gate and letting nature take its course.

Winter barley crops have sprung into life and are now at growth stage 31. This has led to a flurry of activity, with several phone calls asking: “Is it too cold for chlormoquat” or “How much scorch is likely with this mix?”

All decisions are a balancing act and delaying applications must be set alongside what are the implications.

Again, the weather is a double-edged sword, and the dry, cold weather has stopped disease in its tracks, and I do not see delaying fungicides as a major problem.

Growth regulation is more of a challenge, and as stem extension is in full swing, this is the key time for early applications. Despite conditions not being ideal, it is important that these are applied to crops at a high risk of lodging.

Winter wheat crops are a vast array of sizes and the September-drilled crops are now approaching growth stage 31. I have certainly developed an inferiority complex about yellow rust.

Social media is full of the impending tsunami of disease all over the country. I have even resorted to taking my reading glasses with me, but still, I struggle to see any disease.

In January, it was reasonably easy to find pustules in a range of varieties, but now hardly a dot. The same can be said for septoria, with all new leaves clean.

Sadly, the inoculum will not have gone away and as conditions change so will the disease threat.

Many crops will not require a T0 as disease levels are very low. However, this does pressure the T1 spray as timing will be critical.

It is important to remember that not only are you trying to protect against current diseases, but also protection against future disease.

Going too early will mean a longer interval between T1 and T2, which in my experience is where yellow rust can strike.

Earlier-applied graminicides are now showing the typical strangled tillers leading to an outbreak of yellow leaves.

Take great care with these crops and do not follow on with a strong growth regulator programme, as the two can combine to severely stunt the crop.

Spring drilling has gone very well and is nearly finished, with only maize, potato, and fodder beet crops to go.

Needless to say, in our annual spring drought we could do with some rain.

A very active few weeks during some dry, but temperature fluctuating, days has seen the majority of the spring crops drilled. Still some potatoes, peas, linseed and millet to go, but at least we are confident they will go in.

The dry weather has caused some challenges on heavier soils where the top 2cm are dry but underneath, we have a cold, wet, plasticine layer that if disturbed creates a very lumpy seed-bed.

Direct-drilled crops appear to be slow to come through due to the cold soils.

With T0 now done, concerns over septoria have significantly receded and odd outbreaks of yellow rust appear to be well controlled.

However, we have been here before in so-called dry springs, where even heavy dews on windy days have appeared to be enough to get septoria going, so when planning T1s, I shall take careful note of variety and drilling date to ensure we are covered.

Weed control in both barley and wheat is as good as I can remember.

There are low levels of grassweeds in some fields where we have had to cover problems such as blackgrass, bromes, wild oats and, for the first time for a long time, some onion couch.

From recent crop inspections, control looks to be OK, but I would have preferred a little warm weather to be certain that the activity of contact graminicides was at its optimum.

Next week we should be able to know for sure how well we have done.

Winter oilseed rape crops are very variable, with some suffering significant pigeon grazing, while others not far away appear unaffected.

Cabbage stem flea beetle larvae are also relatively easy to find. Some rain would be of great help to get the last top dressing working and get the crop moving.

Thankfully, pollen beetle have not reached threshold levels so no treatments recommended or made.

With no real curative fungicides in OSR, I have applied a low-rate azole at green bud.

Spring has certainly been a stop-start affair, with unseasonably warm temperatures at the end of March, quickly changing to sub-zero daytime temperatures when factoring in the wind chill combined with hard, overnight frosts and even snow in the last week.

However, with longer days and the increasing power of the sun at this time of year, spirits are now starting to lift after what has felt like a very long winter.

Crops are slowly moving into spring growth (although this has been checked by the recent cold snap), which has been supported by earlier-applied nitrogen, which fortunately found sufficient moisture to make it available for the crop and aided tiller retention on the cereals.

Wheats remain incredibly variable with regards to growth stages. On the same farm this can range from earlier drillings beginning to reach growth stage 31-32, to the later drillings remaining at the late tillering stage.

Yellow rust continues to be the most prevalent disease, with the recent cold weather doing little to suppress this. On susceptible varieties, T0s have been applied.

Septoria remains within the base of the canopy, which is not surprising after the high rainfall during the winter.

T1 fungicides will be important to prevent this spreading. The timing of the T1 fungicide is fundamental to success of the overall programme.

Nodal growth stages give a good indication at BBCH 31-32, however, targeting the emergence of leaf 3 remains the key driver.

Too early and much of leaf three will be left unprotected, too late and the tip of leaf three is likely to become infected, which will increase the threat of infecting leaf 2 and the flag leaf.

Winter barleys have reached growth stage 30-31 and are receiving T1s for brown rust and rhynchosporium control.

These were slightly delayed to avoid the frosts at night. If growth regulators were applied during the colder weather, be mindful that this may have reduced efficacy.

A late plant growth regulator may be necessary to shorten upper internodes and reduce stem leverage.

Pollen beetle numbers were beginning to rise in oilseed rape, but fortunately the cold weather and frosts suppressed them from reaching threshold.

The majority of crops are now beginning to flower, after which pollen beetles very quickly go from a pest to a beneficiary helping pollinate the crop.

Treatment has not been necessary for most crops.

Most spring drilling has been completed and management of broad-leaved weeds in sugar beet is starting.

Fortunately, with adequate moisture at planting, emergence is much more even than last year, helping towards the timing of the herbicides, which has become even more important since the loss of the contact activity from desmedipham.

Aim to target the first flush of weeds while they are at the cotyledon stage, although if this coincides with beet that are at the peri-em timing, and we are still having cold nights, be particularly careful with use of herbicides.