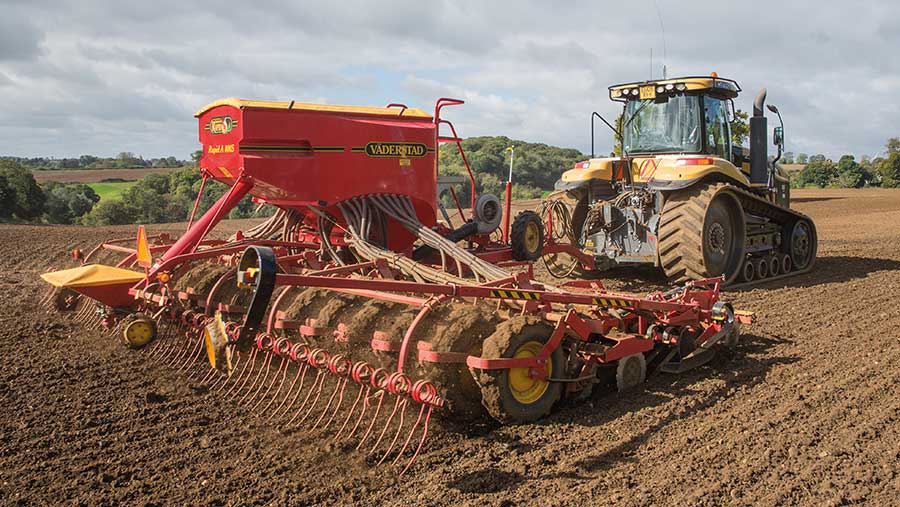 However, concerns are growing that farmers are being tempted to drill wheat early, given the wet spell and memories of last year.

Later drilling not only has benefits for blackgrass control, it also helps reduce the risk of barley yellow dwarf virus and foliar diseases.

This is vital with the loss of chemistry, especially as this season is the first growers are facing without chlorathalonil.

After a prolonged harvest, it is nice to see fields cleared and the evidence of what was one of the most difficult cropping years removed.

The focus has quickly shifted to sowing autumn cereals, with a rush to drill wheat and barley early. Making decisions about how to farm based on what happened last year is both puzzling and understandable.

Attempts have been made to negotiate delayed drilling for better blackgrass control – a task, in some cases, as tough as negotiating a Brexit deal.

For cereals sown early, the subsequent weather unfortunately remained hot and dry, which was not ideal for the all-important pre-emergence herbicides to work well for grassweed control.

In some cases, the relief of having early-sown good-looking cereal crops may change to disappointment, as it could be difficult to control high levels of blackgrass.

Good seed-bed quality with moisture and cooler conditions will all help to get the best performance from the residual herbicides.

Autumn pests
For early-sown cereals, look out for aphids and gout fly eggs. Both pests can cause damage that will not be seen for some time.

With aphids increasingly resistant to the pyrethroid insecticides, their use needs to be well targeted. There are some good tools available that can help with making decisions about insecticide timing for aphid control.

The area of rye is slowly increasing in the region. In recent years, it has been grown as forage for anaerobic digestion plants, but now more hectares are being grown for the harvested grain to be fed to pigs.

Rye makes a good alternative for the second or third cereal position in the rotation and is particularly competitive against blackgrass in the spring.

Oilseed rape establishment has been excellent so far. Crops sown before mid-August typically have eight or more leaves and look particularly well, having had little or no bother from cabbage stem flea beetles.

High levels of volunteer barley have emerged with the oilseed rape, which has required prompt herbicide control to prevent crop competition. Clethodim is being applied on earlier-sown crops to control blackgrass, which is becoming well established.

Delaying this herbicide too long will soon affect its efficacy as OSR plants shield the blackgrass. Phoma is beginning to appear in crops, although it has not yet reached the threshold for applying a fungicide.

Well, here we go again – the start of another season. The 2019-20 cropping year proved to be the most difficult in most people’s memory, with weather extremes from the very start, right through to the very end.

In the South West, crop performance depended on two main factors – whether crops were planted before the weather broke last autumn, and if they were grown on moisture-retentive soils.

If either or both of these factors were missing, crop performance was generally poor, resulting in the most disappointing harvest in 30 or 40 years. The big noteworthy exception to this is the maize crop, which on the whole is performing at above-average levels.

Most winter OSR crops were drilled on time in mid- to late August and have emerged swiftly. We have experienced cabbage stem flea beetle attacks again, but generally not quite with the severity of last year.

The acreage of this crop is lower again this year than last, reflecting the lack of grower confidence in a crop that is so difficult to establish and protect against pests that can severely damage yield and quality.

Early drilling
At the time of writing, drilling is about to start in earnest, but there are a few crops that were planted a bit earlier and are now emerged or emerging. In the deep South West, these early-drilled crops bring their own set of challenges, not least of which is the threat from barley yellow dwarf virus.

Crops that are already emerged will require at least two applications of aphicide – and maybe more, depending on how early or late winter decides to arrive.

Personally, I am still struggling to come to terms with the withdrawal of Deter seed treatment. This product was targeted only at the target pest, with very little risk to beneficial insects when compared with the blanket-spraying approach now being adopted to control the virus.

Winter barley crops should be receiving a pre-emergence herbicide, as post-emergence options in this crop are now fairly limited, particularly if the grassweeds have germinated along with the crop and become established early in the life of the crop.

Hopefully, by the time I write my next article, drilling will be largely completed and there will be more to report on. Let’s hope the weather is more on our side for the 2020-21 growing year, and good luck to all involved.

Given the absence of insecticidal seed treatments, and the increased incidence of pyrethroid resistance in virus-transmitting aphids, a reasonable strategy to reduce the risk of barley yellow dwarf virus in cereals is to delay drilling – if possible, until the beginning of October.

With the reduction in our grassweed active ingredient armoury, and increased resistance of grassweeds to single-site post-emergence herbicides, we are more reliant on cultural control for tackling difficult grassweeds. This involves creating stale seed-beds, getting a good flush of grassweeds, spraying off with glyphosate and following with a robust residual herbicide.

These need to be applied to a fine, firm, moist soil. An easy way of helping this happen is to delay drilling, if possible, until the beginning of October.

Disease control
Having lost chlorothalonil earlier this year, and with key azoles being banned in the near future, disease control in cereals will prove a bigger challenge than in the past.

A way of reducing this risk is to not have super-forward, lush crops going into the winter. This can also be helped by delaying drilling until October.

By the time you read this, probably 80% of the cereal area I look after will have been drilled, with the forecast predicting a good, settled spell for the second half of October. Hmmmm.

Conversely, early-drilled winter oilseed rape looks fantastic. The area I look after is probably about half the area I’ve had in previous years. It had surprisingly low flea beetle activity, and the crops that took advantage of the August rain have raced away.

I haven’t seen any very late-drilled crops, because I don’t have any, so I don’t know how well they’ve faired.

The forward crops didn’t like the searing temperatures in early September, but now that it has cooled down a bit, they have recovered well and look fit to go into a cold winter. We can but hope.

Back in August, I discussed with oilseed rape growers what strategy we would employ to achieve cabbage stem flea beetle control.

I suggested that with the pest’s resistance to pyrethroid insecticides, we should move away from what would be for all intents and purposes “recreational insecticide applications”, which would also be detrimental to the population of beneficial insects.

Instead, we would focus on extra foliar nutrition to keep the crop as healthy as possible, so they are able to overcome attack and grow away from damage. At the moment, this seems to have paid off, with no crop written off due to flea beetle damage.

Granted, soil moisture and temperature have been favourable, but the smaller plants in the odd spray miss, and an abundance of cobwebs in most fields show this approach has been beneficial. The foliar nutrition used was phosphite-based with potash, manganese and zinc. 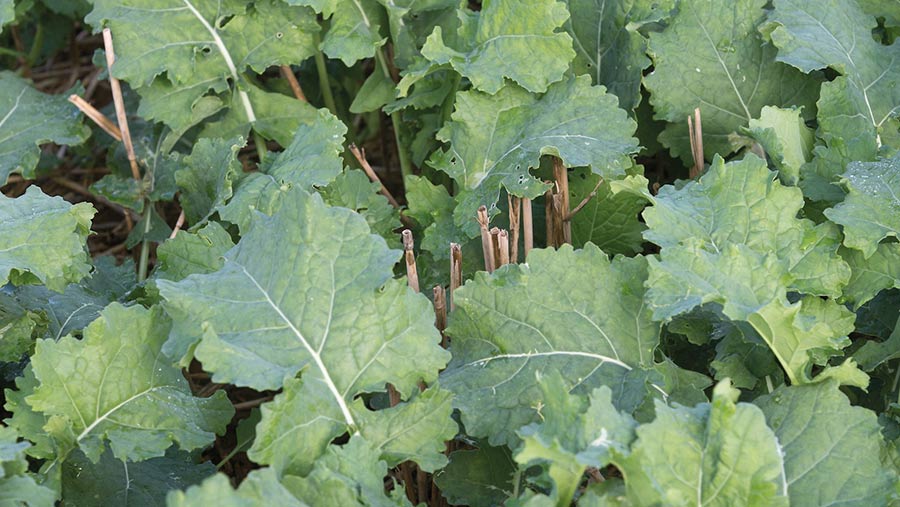 Blackgrass flushes
With the weather and drilling conditions of last autumn still fresh in the mind, the temptation to get drilled up early is probably greater than ever for many growers.

However, please bear in mind that most blackgrass will continue to flush until mid-October, and that the earlier cereals are drilled, the more prone to barley yellow dwarf virus they become.

If you prioritise drilling so fields with lower blackgrass pressure are established at the start of your drilling campaign, it will allow dirtier fields to continue flushing. In these situations, pre-drilling glyphosate is a must, as cultivation from the drill will not kill blackgrass.

Some winter cereals are now in the ground, with many beginning to emerge. Pre-emergence herbicides have been based on flufenacet + diflufenican in most places, with the addition of tri-allate where blackgrass pressure dictates that more chemistry is needed.

Insecticide applications to control these aphids will facilitate a post-emergence flufenacet-based top-up without the need for an additional sprayer pass. As with the oilseed rape, I plan to add the same foliar nutrition to cereals to boost rooting and general plant health.