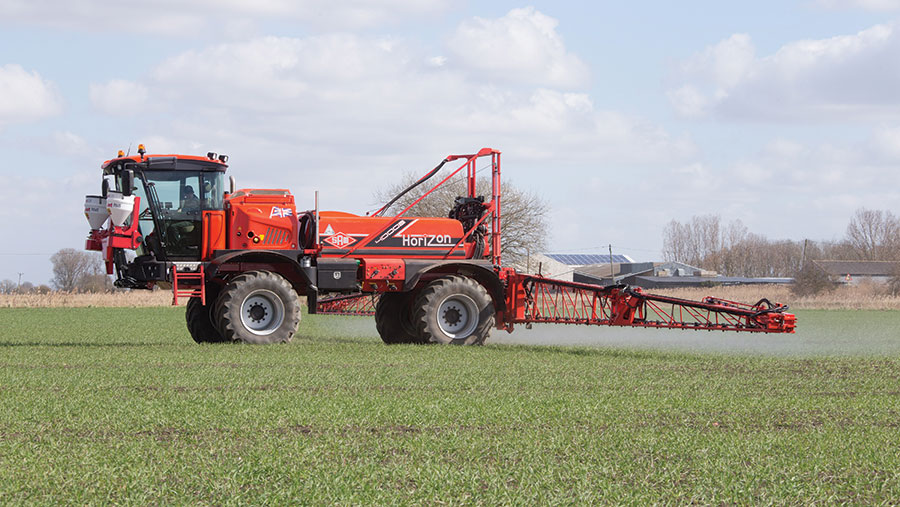 Managing weeds is proving to be a headache for our agronomists this week, as many cereals that have been established have not had any herbicides applied.

In Scotland, some crops have considerable amounts of annual meadow grass, and further south, it is a similar picture with crops still to receive a herbicide.

Tackling weeds will become a priority when sprayers can travel and crops have perked up from their first fertiliser dose.

It feels as though we have turned a corner, and after three to four months of wet winter weather, the ground is fit to travel for many farmers and the first dose of fertiliser has gone on.

Many have taken a cautious view and put on relatively small quantities of nitrogen fertiliser – 15-25% of the planned amount.

However, some are dealing with the backlog of work by applying a more substantial dressing now.

The worry is always the unpredictable amount of rain that might come immediately after a top dressing of nitrogen.

OSR has mainly come through the winter fairly well.

There is a huge difference between the early-sown crops and those drilled in September.

The later crops have barely moved for four months and are sitting around the 5-6 leaf stage.

They are the most vulnerable to pigeon damage, which begins in earnest at this time of year.

For the rest, I would wait until welly-boot height for the first N and then apply the second as late as possible without damaging the crop.

Disease levels are low and one pass with Proline (prothioconazole) may be sufficient.

The cereals are very mixed. Late-sown wheats that have sat in the wet are looking hungry and stressed now.

Many of them have not been sprayed so a herbicide is required and some kind of plan for disease prevention.

At the other extreme are the wheats that were sown in August, which are now 15cm tall, and are ready to jump when nitrogen and warmer soils are available to them. These can wait for fertiliser.

Most of them are fairly well tillered, but the root systems will be shallow after such a wet winter.

There is a bit of septoria on the oldest leaves, but nothing too drastic.

Therefore, I am looking at a cheap T0 with an early split of chlormequat to help them along.

Weeds are always a problem if no autumn herbicide has gone on.

Some crops have considerable amounts of annual meadow grass and other grasses, and will need a decent residual to clean them up.

Others have very few weeds so far and a less expensive programme may suffice.

However, there are many weeds still to germinate.

The winter barleys are looking well – not too thick, but generally no gaps in the crops and not much disease yet.

They also appear to have come through the winter less yellow this year, which is surprising considering how little fertiliser must be left in the soil.

My county of Herefordshire has been one of the many hit hard by flooding along with the surrounding counties of Shropshire and Worcestershire.

Despite the recent flooding, planting across my acreage was ahead of many others in the central Midlands, with winter cereals in the region of 60% planted.

However, there are many fields where we have patchy establishment or have lost areas to waterlogged soils.

Discussions with growers go along the lines that we need to make the best of what we have because we have had very little option to do anything else with these fields that we might have done in other years.

It is going to be a season when we are going to put on hold having pride in good-looking crops, but we have to make the best of them by ensuring nutrition and trace elements are not limiting.

January was the only sub-100mm rainfall month out of the previous four months.

That did allow a few growers to plant some wheat in early February, with my reassurances that days in February are longer so should be drier than November.

We then had more than 160mm of rain in the two successive storms.

Therefore, recent inspections were carried out in trepidation, but thankfully they are showing some promising signs of emergence so these planting may have not been in vain.

Very few crops have had any herbicide applied, which means that grassweed control is going to be difficult, especially in cereal crops other than wheat where we have fewer contact herbicide options.

These situations will be the priority for spraying once we can travel and we have got some fertiliser on to perk the crops up first.

OSR crops in my area have come through the autumn cabbage stem flea beetle challenge and have started to move into stem extension, which they are doing with very little nutrient available to their reduced level of rooting hence they are single raceme plants at present.

These will be the first to be targeted with fertiliser. Some did manage to get some fertiliser applied last week in the three successive dry days we had.

It is no surprise that no spring crops have been planted yet, although there is a significant increase in area planned, with both spring barley and oats up 57% and 47%, respectively, for me.

There are concerns about what value these will attract in the market with the likely increase in tonnage.

Therefore, some growers are considering not planting spring crops and either fallowing or cover cropping these fields so they are ready for timely (September) planting in autumn 2020.

This season (more than ever), each field has its own specific needs and time scale, so our strategies will need to be adapted to these.

Winter cereal crops are diverse depending on drilling date and field conditions during establishment.

Despite the gloom, there are a number of good and mediocre first wheats that have tillered well, with the potential to yield well given the right management.

These crops that received a pre- or early post-emergence herbicide are relatively clean for grass and broad-leaved weeds.

These are in contrast to crops in poorly draining soils, which have been slower growing.

There are also “dirty”, untreated crops highlighting the strong efficacy of residual herbicides.

Consider the spring herbicide strategy depending on the weed burden and the likely efficacy of sulphonyl urea-based graminicides.

Winter cereals and rapeseed should have received a generous first dose of nitrogen with sulphur.

This is important to encourage bigger leaf size, tillering and to provide a buffer if conditions do swing to dry, especially for weakly rooted crops in poor-structured soils.

Later, we can tailor total nitrogen dose according to crop growth.

The need to treat will depend on drilling date and geography.

This will allow a clear run for graminicides, plant growth regulator and fungicides towards the end of the month.

Beware, later-drilled crops and those restricted by poor growing conditions will move quickly through their growth stages as the influence of day length will drive crop development.

Late-drilled spring cereals and sugar beet have lower yield potential, but better to wait and drill these into a decent seed-bed with hope than rush into a muddle.

Ahead of beet drilling, hygiene is important.

Where possible, remove potential sources of aphid and virus infection, such as dumps and volunteer beet in subsequent cereal crops and on uncultivated harvested fields.

This is the second crop without neonicotinoid seed treatments.

The winter has also been mild, which has caused an increased and early predicted infection of virus on smaller, later-drilled beet.

Crop walking these days requires a wetsuit and snorkel.

Any opportunity for field work remains very limited, even for the free-draining soil on the Downs.

Many winter barley and viable oilseed rape crops have not received their first top dressing of nitrogen, and ground conditions are some way off being able to travel after the last week’s deluge of about 38mm of rain.

This is likely to now affect yield as overdue field work has been delayed for another week.

Residual nitrogen levels are likely to be much lower after the continued wet weather and, therefore, any forward winter barley will receive around half of the total in one go, swiftly followed by its first plant growth regulator.

Some oilseed rape will have had a small amount of early nitrogen, however, this also will require two further applications in quick succession if it’s not to get too tall for tractor-mounted spreaders.

Much of the propyzamide that was applied towards the end of January is now showing signs of working well.

Both phoma and light leaf spot are evident in susceptible varieties, along with varying populations of flea beetle larvae.

Viable crops will shortly receive a prothioconazole plus tebuconazole fungicide along with the trace elements boron and molybdenum as soon as conditions allow and where tissue sampling has shown a deficiency.

Generally, the larval pressure within OSR crops is very high again, but not everywhere.

Some fields never emerged until mid-September and seem relatively untouched by flea beetle larvae compared with some of the earlier plantings, which are getting eaten alive internally.

On winter cereals, patches of barley yellow dwarf virus are becoming more evident where crops were relatively early drilled and no autumn insecticide treatment was possible. 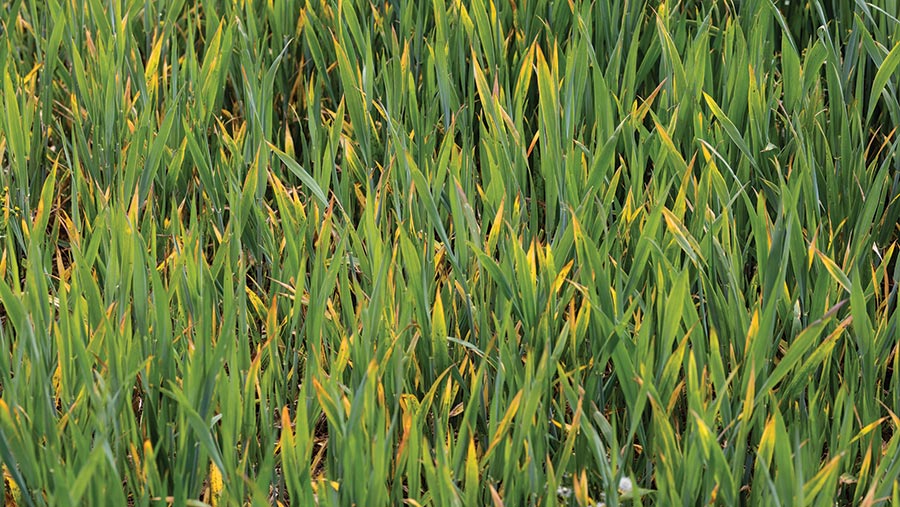 Spring aphid numbers appear to be low and will be monitored carefully.

Most winter cereals are still to receive a herbicide and will receive a tank mix of mesosulfuron + iodosulfuron + metsulfuron + tribenuron where the problem is blackgrass and broad-leaved weeds.

The dilemma of what to do with remaining uncropped land will provide challenges this spring.

The key theme to manage more unpredictable weather patterns is through; minimal soil disturbance, permanent soil cover and to always have something growing in the soil.

This was clearly demonstrated a day ago while walking a winter barley crop – the tramline had running water full of soil verses the cropped area holding the soil particles together with living roots and excellent water infiltration despite the sudden downpours.

The solution is to make every cash crop a cover crop.