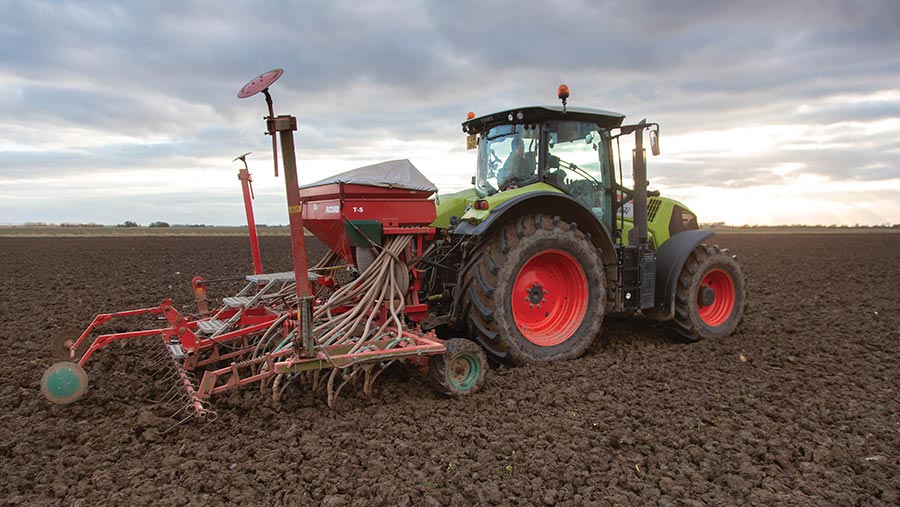 The wet October weather continues to frustrate drilling progress across parts of the UK, and it is also resulting in a greater amount of crop effect from the pre-emergence herbicides.

In some heavy land situations in the North, seed-bed quality is so poor that it has been too risky to apply a pre-emergence herbicide, which will make weed control challenging.

See also: Why some farms will suffer under post-Brexit pesticide rules

Continuing wet weather is also prompting some growers to consider spinning and harrowing wheat seed in, but this reduces the residual chemistry options that are available.

Meanwhile, In the South West, barley yellow dwarf virus, with its ability to decimate cereal yields, is the main concern.

Frequent rain throughout October, albeit not in the quantity of last year, has caused a lot interruptions and delays to drilling progress.

Seed-bed quality on some heavier soils has not been great and it has been difficult to decide what cultivations and drill settings to deploy. In many cases the land has been just too wet no matter what the method of establishment.

Consequently, headlands have suffered the most, with seed mauled in to leave a less than ideal seed-bed. Despite the delays and frustrations, the positives are that more blackgrass has emerged prior to drilling, as well as good flushes of volunteer spring barley and oats which have been controlled with glyphosate prior to drilling cereals.

Unfortunately, early-sown wheat crops after spring barley have huge numbers of volunteer barley and the same is true for wheat volunteers in winter barley. It will be very difficult to control these, and is another consequence of 2020 which will roll into next year.

With fist-sized clods in some poor seed-beds, it will be a challenge to get high levels of grassweed control from the residual herbicides. In some cases it has been too risky to apply a pre-emergence herbicide due to the lack of seed depth and soil cover.

With such a mixture of drilling dates, seed-bed quality and spray timings it will be interesting to see the success of grassweed control in the coming weeks.

Oilseed rape
Oilseed rape crops have established exceptionally well whether they were sown in early August or through to late September. Cabbage stem flea beetle pressure has been much lower than in previous years with the later sown crops missing the main flea beetle migration.

Clethodim appears to be working well at controlling blackgrass in earlier sown crops. It will soon be time to consider applying propyzamide to provide some residual control for grassweeds such as blackgrass. It will also be a useful method of controlling later flushes of volunteer barley.

The addition of aminopyralid to the propyzamide will be necessary to control weeds such as mayweed and poppies.

Phoma infection levels remain low, which is surprising considering the quantity of rainfall in the past month. Perhaps this is due to the greater proportion of varieties being grown with improved genetic resistance to this disease.

Winter beans are being sown now. Due to a shortage of seed, some spring varieties are being sown this autumn, but at a much higher seed rate compared with their winter counterparts.

Seed-bed quality tends to be variable at the best of times for winter beans. However, a good seed-bed will maximise the efficacy of the pre-emergence herbicide mix.

A month ago, the Met Office forecast was for a settled second half of October, and I castigated people for rushing on and drilling too early. Well, the settled spell never arrived and I’m happy to uncastigate.

We certainly can’t blame lack of moisture for residual herbicides not working, with 230mm rain falling in Hampshire over the last month.

Fortunately, unlike last year, there have been dry spells between the downpours and most people have been able to push on with both drilling and pre-emergence spraying.

The warm, rapid-growing conditions have led to a fair amount of crop effect, but that doesn’t bother me too much. Rarely, if ever, have I seen autumn crop effect that leads to yield loss. It normally means the residuals are going to do a good job on the grassweeds.

Top-up herbicides
Downpours over the past couple of days will mean that not much will be happening for a few days, but it’s amazing what even a short period without rain will allow people to get on with. There will need to be insecticide sprays on earlier drilled crops, and probably some top-up herbicides.

If the ever-promised settled spell does arrive, any later planned drilling should be achievable. Last autumn showed just what we can get away with, and we’re already in a much better position than then.

Most oilseed rape crops look in rude health. The mysterious lack of flea beetle damage in my patch has left people pleasantly surprised. It’s also caused some eyebrow raising among a few people who, quite understandably, decided not to grow OSR this year. I wonder what conversations we’ll be having next August.

Crop prices seem to be on the up, which is cheering. I now have to prepare myself for a season where a significant chunk of firepower has been removed from my armoury. In the meantime I might just serve myself a big slice of humble pie.

Since last writing, the weather has been a bit variable, but thankfully it has been better than last autumn, with many crops now successfully drilled up and into some fairly nice seed-beds.

With delayed harvesting and a lot of secondary growth in last year’s crop to contend with, there has been quite a bit of volunteer growth appearing in fields both before and after planting this season, which has given a bit of a tatty appearance to some crops.

As mentioned seed-beds have by and large been pretty good which in turn has meant that crops are emerging evenly and well. Most crops that were destined for a pre-emergence herbicide have received them in good order and fields are looking largely weed free.

Aphids and barley yellow dwarf virus are our most pressing issue at present. Aphid numbers are relatively high and as yet we have not had the sort of temperatures that might be expected to bring aphid migration to an end. This combined with catchy weather is causing some concern.

Applications of an aphicide should now be a priority on earlier drilled crops. The various online tools to help with good timing of these applications are a good starting point, but with spray days and conditions at a premium, my advice would now be to apply at the first opportunity and if a second application is required then so be it.

I am old enough to remember the pre-aphicidal seed dressing days, and in the southwest the estimate of up to a 50% crop loss of yield due to a bad barley yellow dwarf virus infestation, is a gross underestimate. I would urge all growers to take this threat very seriously. Because an aphicide is a relatively cheap input does not make it an unimportant one.

Maize cutting
The maize harvest is continuing at pace in between the showers. There have been some exceptional yields this year, but there have also been some disappointments.

The high-yielding crops are being delivered on units where sufficient nitrogen has been applied to meet crop demand and the disappointments are largely on units where the value of livestock manures has been overestimated. Storm Francis back in late August has caused a few problems with lodging or leaning maize crops this year and the situation was made worse by the size of the crops rendering them more susceptible to a big blow.

It should be remembered that a storm such as this in August is still relatively rare, but selection of a variety with good standing ability for exposed sites is probably a good idea.

The small area of winter OSR down in the South West has by and large established a lot better than in 2019, with less attention from the dreaded flea beetle. It is now, however, a relatively minor crop in the region.

Hopefully by the time I next contribute, I will be able to report that barley yellow dwarf virus control applications have successfully taken place and that, therefore, yield potential will have been protected from this ever-present threat in the South West.

Although we had good drying weather towards the end of last week, which allowed more drilling on light-to-medium soils, the heavier clays were just about dry enough to think about getting close to with a drill, and then it rained again.

More cereal crops than usual are showing effects of bleaching from the pre-emergence herbicides applied, with those having been treated with diflufenican showing the greatest symptoms. This is mainly due to crops sitting in wet soils, with the pre-emergence chemistry sitting in solution around them.

There are now murmurings on farm about getting the fertiliser spreader out and spinning cereals on and harrowing them in as a means of establishment. There are a couple of issues associated with this which could potentially seriously limit yield:

Firstly, by the very nature of going down this route the soil will be wet, and will need to be treated with respect.

Fields that were established like this last year, and then power-harrowed in, saw the tips of the power-harrow smear a pan which not only held water in the top few inches of soil, but impeded the downward movement of roots. So when it dried up in the spring the ability for crops to access moisture was severely limited.

Choice of cultivation implement will play a large part in maintaining yield potential.

The plant will need to be big enough and strong enough to accept this application and I would advise not applying before the crop gets to the two-leaf stage (growth stage 12).

Hopefully, by the time I write next, the weather will have given you break you’re after…