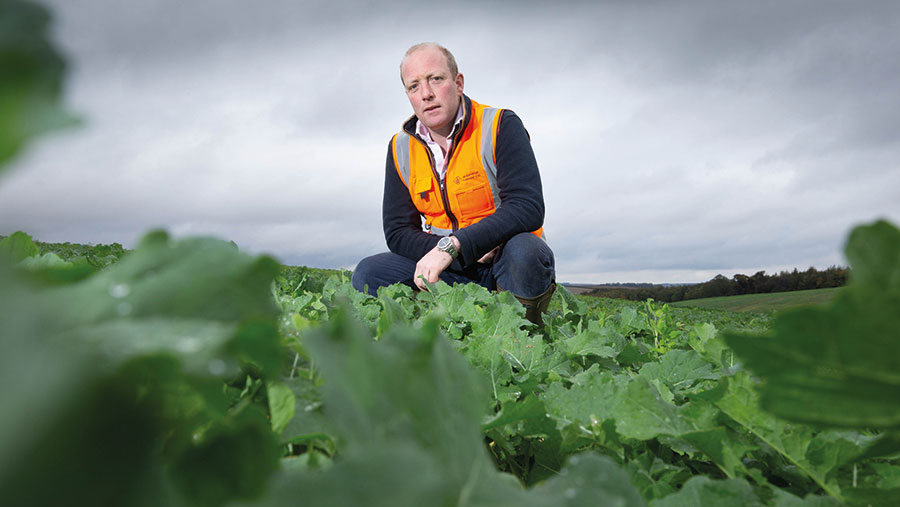 Oilseed rape has kept its place in the diverse rotation at Albanwise Farming in Yorkshire, where the focus is achieving consistent, optimum results.

With about 350ha of the crop, the main challenges associated with growing it have been identified and a strategy formulated, targeting the elements that are known to work consistently and giving it every chance of performing well.

For the firm’s Yorkshire farms director, Jason Turnbull, having the right growing conditions for the crop up on the Yorkshire Wolds helps, but the main emphasis is on early establishment and detailed nutrition. From there, the rest tends to fall in place naturally.

“We concentrate on getting it drilled early and making best use of nutrition to keep the plants healthy,” he says. “It’s a simple system which then allows us to fine-tune things in the spring.” 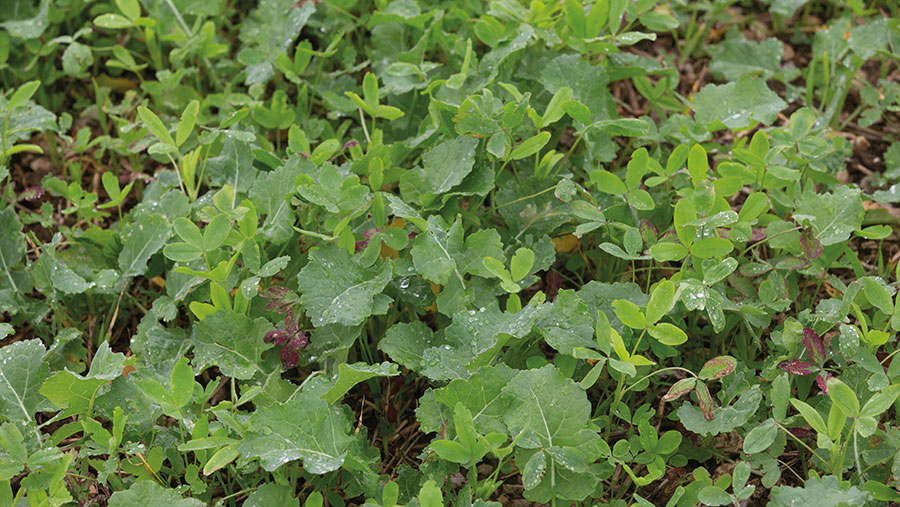 By early establishment, Mr Turnbull means having all of his oilseed rape in the ground by 7 August, wherever possible.

For this to happen, the crop always follows winter barley and an application of either cattle or pig muck, or digestate, all applied to the maximum nitrate vulnerable zone limits.

Establishment methods range from strip-till to deep mixing with the drill, crucially followed by a Rexius press and then rolled.

Consolidating the chalk and flint soils effectively deters pests, retains moisture and ensures the good seed-to-soil contact that is needed for rapid, even establishment. In addition, liquid phosphate is applied at planting, at a cost of £23/ha.

“Having got the crop off to a flying start, nutrition is key to keeping every branch healthy until the spring,” he says. “That way, it appears that cabbage stem flea beetle larvae tend to stay out on the lower branches, rather than migrate to the main stem.”

For this reason, sap testing is carried out every three weeks throughout autumn and winter, with any deficiencies being addressed with the appropriate foliar feed as they are identified. As such, the crop gets exactly what it needs in a measured way, to maintain plant health. 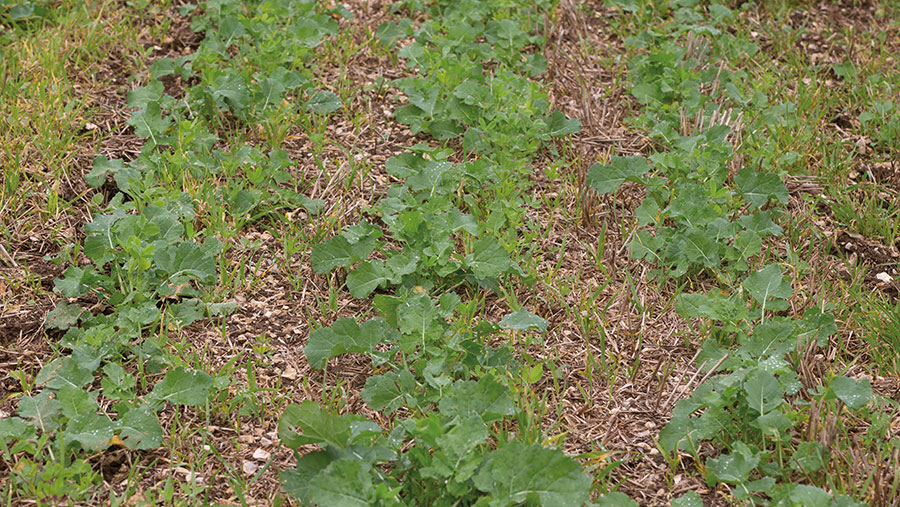 Two conventional varieties, Campus and Blazen, are being grown this year, both chosen for their vigorous, fast development and light leaf spot resistance. In most years, farm-saved seed is used, with no seed treatment applied.

“We haven’t dismissed hybrids – if we can prove a consistent yield advantage they may be used sparingly due to seed cost,” says Mr Turnbull.

“There could also be a place for turnip yellows virus-resistant varieties in the future – at the moment, they don’t quite offer the other characteristics that are so important to us.”

A companion crop is always used, with berseem clover being mixed with the OSR seed so they are drilled together. This gives both a rooting and a nutritional benefit, which Mr Turnbull believes is worth its £11/ha cost.

“Having clover well-established and nodulating produces a gentle drip-feed of fixed nitrogen throughout the autumn for the rape crop and also helps it to push its roots down.”

A rate of 45-75 seeds/sq m has been used this season depending on elevation, with 10ha worth of seed tipped in the hopper at a time to prevent seed separation occurring. Growing the crop at height, where lower temperatures occur, means that plant growth isn’t excessive before the winter.

The productive soils, long summer daylight hours and adequate rainfall found on the farm at Low Mowthorpe, near Malton, provide the perfect backdrop for successful oilseed rape, with the crop currently being grown in a one-in-seven rotation.

Plans to introduce cattle into the business will see this develop further, and with 7,000 pigs already on site, the aim is a fully integrated farming system.

Oilseed rape is achieving a rolling five-year average yield of 4t/ha, with the Albanwise team concentrating on upholding this rather than trying to break records at unreasonable cost. At this stage, 4.5t/ha is an achievable average target.

From next spring, full in-house agronomy in Yorkshire will give the flexibility to react quickly and keep a lid on input spend, while membership of Green Crop Information provides access to independent, shared knowledge to assist decision-making.

With two sites in Yorkshire and the same in Norfolk, covering 12,545ha, Albanwise Farming has ambitious long-term sustainability aims, with artificial fertiliser use currently in its sights.

Flea beetle pressure can be high, so getting the plants up and away ahead of the main migration is a priority. Constant monitoring takes place in the early days, as the business has a policy of trying to avoid using insecticides on the crop where possible.

“Good plant health, which is aided by healthy soils and optimum nutrition, also helps with disease control – phoma is less of an issue, due to large, robust plants in the autumn.”

Pigeons are a different matter – they can be responsible for significant yield loss and Mr Turnbull budgets £45/ha for dealing with them. For this reason, achieving robust headland crops is a focus, with extra cultivation and organic nutrition applied to prevent thinner stands that allow ingress of pigeon grazing.

In terms of weed control, a graminicide is used on the barley volunteers as soon as they are visible, but pre-emergence herbicides don’t feature, to avoid any negative effect on early crop vigour.

The clover companion crop should be taken out by frosts, but having the likes of Astrokerb (aminopyralid + propyzamide) and Belkar (Halauxifen + picloram) available give post-emergence options for that, as well as a wide range of broad-leaved weeds.

That said, he recognises that it wouldn’t be an issue if the clover plants remained healthy throughout the growing season – and perhaps even beneficial.

Otherwise, propyzamide is used across all of the oilseed rape in accordance with soil temperature guidelines, to keep on top of blackgrass, with the overall spend on autumn herbicides being between £60-£100/ha.

Mr Turnbull will remain open-minded on the need for an autumn fungicide, but believes he is unlikely to get away without having to treat the crop once.

In the spring, the first application to the crop is digestate, made as soon as it is possible to travel. After that, N sensors are planned to fine-tune nitrogen applications according to crop requirements and a growth regulator is often applied before stem extension, according to canopy size and lodging risk.

His only other concern is sclerotinia and he makes good use of the forecasts to assess the risk. “We don’t spray for pollen beetle or seed weevil due to its effect on bees and beneficials at flowering, and have yet to be convinced of the need for a foliar N top-up.”

Having accepted that the biggest challenge with oilseed rape is consistency, he has set objectives and stuck to them. “The crop does have a future here, but we’ve had to commit to getting it drilled early.

“Using muck effectively to build soil fertility is helping, with detailed nutrition also underpinning our approach. It isn’t complicated and the focus is on good farming practice, using methods that have been proven to work regardless of how dated or unfashionable they may appear.”

Corteva Agriscience is delighted to sponsor OSR Future, a series following the progress of the 2020-21 oilseed rape crop and exploring how farmers are changing the way that they grow the crop.

As farming changes post-Brexit, so too do the opportunities and threats for break crops such as oilseed rape.Challenges will be overcome by new thinking, open minds and innovation, allowing new strategies to emerge.

With proven crop protection products – such as Astrokerb and Kerb Flo 500 – and innovations such as post-emergence herbicide Belkar, farmers will be equipped with the tools they need.

Plant breeding excellence from Pioneer will continue, with varieties following the path laid by favourites PT256, PT275 and PT279CL.