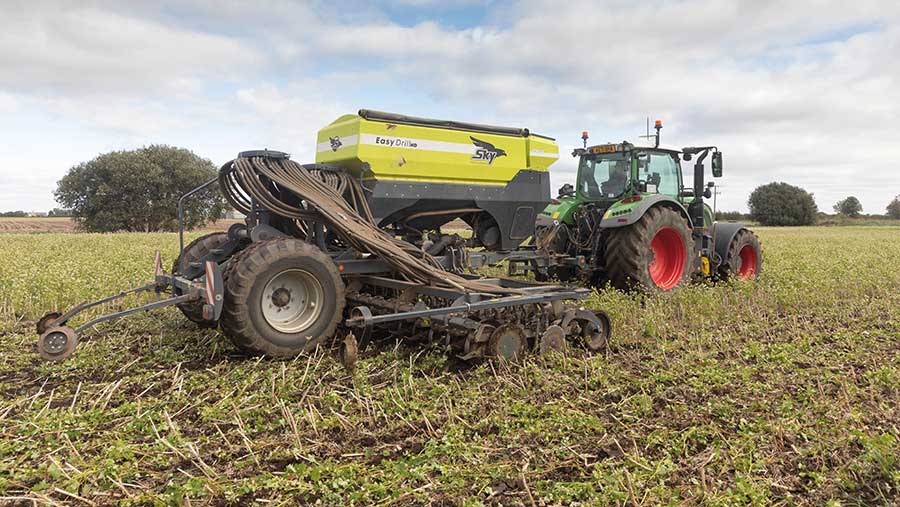 Disease levels have been low in oilseed rape crops, but the recent rain has now increased the risk of phoma, and leaf lesions are already being seen in the North.

Rain has also triggered a flush of grassweeds and volunteers, after a dry September saw delayed weed flushes.

Yet again, it’s been difficult to stop clients drilling in mid-September. We are fortunate in my area not to have the grassweed pressure of other regions, so the argument against drilling this early is less convincing.

These early-drilled crops were actually planted into very dry conditions and needed some rain, although the 86mm we had in the last week of September and first week of October did start to be a concern, with memories of 2020 still in many growers’ minds.

See also: Advice on using metaldehyde up safely before ban

However, the ground has taken this rainfall well and drilling has recommenced this week for many of my clients. Harvesting of maize has started in earnest, so wheat will be drilled in these fields shortly.

While we don’t have the grassweed pressure, those fields where we do have some blackgrass will get aclonifen in addition to the flufenacet + diflufenican, as this performed really well last season – much better than any of the contact herbicides.

Aphids and barley yellow dwarf virus spread is also a concern for these early-drilled crops, so they will be get an aphicide in the coming days.

OSR establishment has been pretty good in general; the rain came just in time for these crops and they are now growing away really well.

Some are so strong that an autumn plant growth regulator or a mower may be required in the next few weeks.

Decisions on whether to use contact herbicide in those large crops has been challenging, but where used to date they seem to be working reasonably well.

Disease levels are currently low, but I expect phoma to start to appear after the recent rains, so fungicide with plant growth regulator activity for many crops will be required before the end of October.

It looks like a busy week ahead on farm, as drilling is set to commence at a pace.

Growers are advised to drill fields in order of their grassweed population, although it is recognised that a degree of patience and nerve will be needed as they get to “dirtier” fields.

Blackgrass emergence has occurred relatively late this season depending on soil moisture, but is now flushing. Delayed drilling until later this month or into November will be rewarded as more grassweeds can be eradicated before drilling. We are eagerly watching the weather forecast to pace ourselves accordingly.

Mid-September-drilled cereals are establishing and most were planted into low-grassweed situations.

However, moisture around drilling has caused high populations of volunteers from the previous crop to emerge. This is particularly problematic where cereals follow cereals, and little can be done to clean up.

Tight supply of glyphosate on some farms is a real problem, leading to rationalisation of stubble hygiene before drilling.

In these circumstances, growers are being particularly careful when to use stocks by keeping “spray-off” timings and/or cultivations close to drilling to control volunteers and weeds.

Rains in the past few weeks have triggered a flush of volunteers and the delayed emergence of grassweeds is under way.

Aim to keep the application of pre-emergence herbicides as close as possible to the drill, as they work best before emergence of the crop and weeds.

The aforementioned volunteers in early drillings or late destruction of the green bridge is increasing the barley yellow dwarf virus (BYDV) and slug risk.

On September and early October-drilled cereals, BYDV sprays should be well-timed at the one- to two-leaf stage. The Syngenta BYDV app is a useful aid to targeting spray timings.

Monitor slug activity before and after drilling and bait drilled crops as soon as necessary.

Rapeseeds are a mixed bag; early-drilled crops (often ex-barley) with early moisture are robust – other crops range from satisfactory to delicate.

Review the viability of small or heavily shot holed crops versus options for replacement cropping. It is critical to do this now before further spend or snookering following crop options with some herbicide applications.

Monitoring systems have reported a moderate migration of cabbage stem flea beetle, which should be reflected in the number of larvae now hatching and entering the stem.

Where crops were planted with a companion crop, these should provide a bank of beneficial predators to affect the emerging larvae.

Broad-leaved companion crops such as buckwheat will die following the first frosts.

Other companions can be controlled by grass- and broad-leaved weed herbicides, most likely Astrokerb (aminopyralid + propyzamide).

If significant populations of broad-leaved weeds are present in rapeseeds without a companion, an interim application of a herbicide such as Belkar (halauxifen + picloram) may be needed before the propyzamide or Astrokerb.

Unlike those on heavier ground, we’ve been in no hurry to get our winter cereals drilled. Not least because our later-drilled wheats came through some appalling conditions to deliver surprisingly well and more consistently than many earlier-sown ones last season.

Even though our harvest was as disrupted by the weather as most, we had a surprisingly dry August here.

Continued dryness through most of last month meant little or no blackgrass or volunteer cereal emergence and, coupled with the second-warmest September on record, raised serious questions over pre-emergence activity.

So, drilling anything but the lowest-risk blackgrass ground would have been madness.

All this has changed now, though, thanks to the 100mm of rain we’ve had in many cases since late September.

This has given us the strong flush of blackgrass and volunteer growth we always wait for. And about two weeks earlier than last year.

The autumn dryness meant good fissuring and water infiltration from our post-harvest cultivations.

Good weathering-down since has left us going into what is forecast to be a more settled spell with some excellent seed-beds.

By the time you read this, we should have sprayed off the stubbles and be well into drilling the 75% of our wheat that must have the most effective pre-Christmas grassweed control, as well as the winter malting barley that needs first-class pre-planting wheat volunteer management.

We are looking to profit from plenty of warmth still in the ground, together with the right conditions for the best pre-emergence activity.

Following the Stow Longa recipe, we’ll be moving as little soil as possible as we drill, and putting the seed in to a minimum depth of 32mm for the greatest pre-emergence flexibility.

They may only give us a little extra blackgrass control, but every little helps in protecting our existing chemistry, as well as bolstering its activity.

A relatively late spring barley harvest – which worked wonders for yields – meant most of our oilseed rape didn’t go in until late August/early September, was held back by the early dryness and had quite a battle with cabbage stem flea beetle, in some cases.

The decent drink they’ve had several weeks earlier than last autumn means most are now motoring along, with up to four true leaves.

Kind weather in September has helped with drilling of autumn cereals in Cumbria.

Winter barley crops are now 100% drilled, and most crops are at the two- to three-leaf stage and have had autumn herbicides applied.

Lighter land struggled with establishment at first in the dry September weather, however, recent rains over the past fortnight have got these crops up and away.

Wheat drilling is almost complete, with 90% of crops in the ground.

OSR crops are doing well and are at the five- to seven-leaf stage.

Those in need have received a graminicide for controlling cereal volunteers, and after recent rains the phoma risk has increased significantly, and lesions are now present on most crops.

Most maize crops in Cumbria were harvested in the last week of September or first week of October, and some farms have been successful in drilling wheat following the maize harvest.

Maize crops have been coming off between 28-33% dry matter – which varies with variety choice and use of film – and with yields of roughly 45-50t/ha freshweight.

The majority of any final silage cuts have been taken in Cumbria, but soil temperatures are still relatively warm and have not yet dropped below 10C. Therefore, grass is still actively growing and it is helping to extend our grazing season before moving on to winter fodder.

Autumn-sown grass seeds are, in general, off to a good start, but many have been very weedy, and herbicides have had to be used this autumn.

As we get later into the season, where grass leys have lots of chickweed present, it is worth considering using herbicides with florasulam as well as fluroxypyr to improve control in cooler conditions.