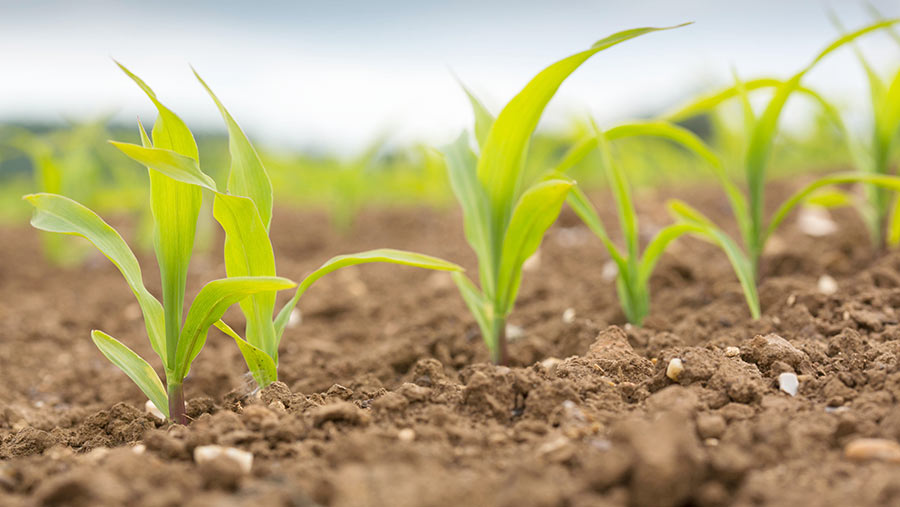 The lack of substantial rain continues to be a concern, with crop potential already being lost. Cereal crops in the East have already lost tillers.

Wheat disease programmes have largely kept disease in check, although yellow rust has been problematic in some areas of the South West.

Ear emergence on wheat means monitoring will soon start for orange blossom wheat midge, which proved to be a problem for some last year.

Finally, maize crops are about to receive their post-emergence herbicide spray to tackle any surviving grass and broad-leaved weeds.

Without tempting fate, it’s nice to be able to say that we have had a very easy season. I bumped into a key operator in the pub last weekend and he told me he’s never had more weekends off than this year.

We had a bit of rain, enough to save the spring crops and turn the winter cereals blue-green overnight with the sudden uptake of nitrogen.

However, some crops are showing signs of drought stress on some of the stonier soils and the grass has stopped growing in my garden. This means we could do with another drop of rain, but not too much.

We’re not chasing disease, but there is that ever-lurking threat of brown rust (good old Crusoe – we can’t have it too easy) and there’s still quite a way to go before harvest.

I don’t think I can remember a year when oilseed rape has flowered for so long.

Undamaged crops finished some time ago, but where crops have been held back for any reason, they have just carried on producing flowers, pods and, hopefully, seeds. I have a feeling that some of these crops won’t be cut until August.

Winter barley has been put to bed, always a lovely feeling because it signals the beginning of the end of the silly season. Some have managed to stretch their wheat fungicide timings (brave) and may get away with only three applications.

Winter and spring beans are flowering beautifully and winter oats are coming into ear at below knee-height.

Growers are still discussing what they will be doing about winter oilseed rape next season. The spanner in the works is the fact that where it looks good, it looks fantastic.

In fact, most things do. The arable fields in my area look very promising. As an aged tractor driver once said to me: “It’s a shame dry weather does any harm. It don’t half make life easy.”

Winter and spring crops have improved dramatically during May as they responded to some much needed rain and have finally taken up the nitrogen fertiliser.

Most cereal crops look well and even oilseed rape is giving a glimmer of hope where previously it has been struggling with the effects of cabbage stem flea beetle and the dry spring.

Winter wheat T2 fungicides have been applied on time. Crop canopies are particularly clean, which has been a combination of good weather to apply fungicides at the key timings and a relatively dry spring.

Leaves one to four are clean and even leaf five has very little disease present. These wheat crops are well set to potentially deliver good yields. However, 2012 springs to mind, when we also had good crops at this point in time then had terrible weather at grain filling, so nothing is guaranteed. 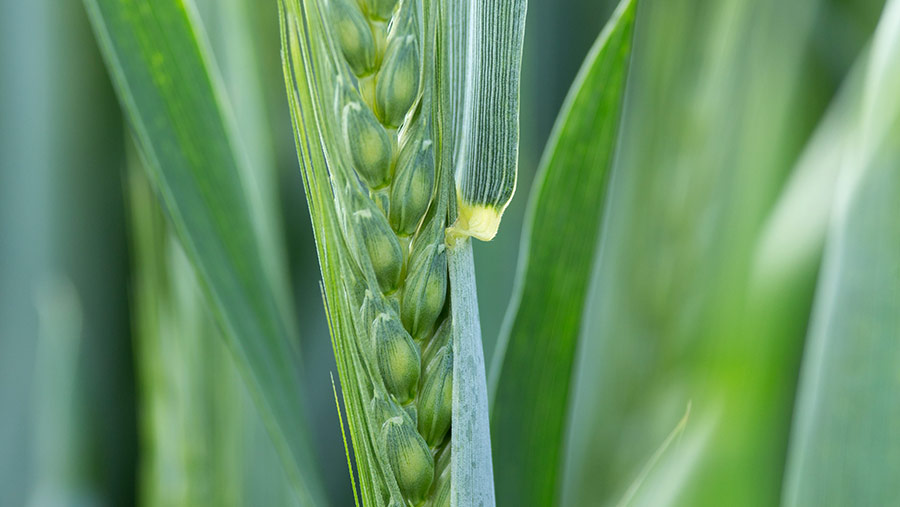 Looking ahead, as the ears begin to emerge it will soon be time to start monitoring for orange blossom midge by placing pheromone traps in the field or looking for them on warm still evenings. The Recommended List has 20 out of 35 varieties which are resistant to this pest.

Again, with limited insecticide options to give good control of the pest, growing resistant varieties not only reduces the risk of suffering yield and quality losses, but also no insecticides are required, so beneficials are not killed.

Winter barley crops have taken up the nitrogen fertiliser particularly late and have changed from being short and stressed at flag leaf emergence to tall and lush now.

Oilseed rape has had a prolonged flowering period in most cases. Just when it looked like they were about to finish flowering, rain then sparked another flush of flowers to appear.

This year there has been more side branching as crops have tried to compensate for the damage caused by cabbage stem flea beetle, which has lengthened the flowering period. As a consequence, a second sclerotinia fungicide has been applied in some cases.

Early-sown spring barley crops look particularly well and are fast approaching the T2 timing. A low rate of plant growth regulator will be required on such crops, especially where the variety is prone to brackling.

April-sown spring barleys on heavier land have struggled to get going so the yield potential looks average at best.

Maize crops have enjoyed the recent warm weather after initially appearing pale due to cold winds and nights. Pre-emergence herbicides have worked well and with the earliest crops now at the four-leaf stage post-em, herbicides are being applied to control surviving grass and broad-leaved weeds.

Predominantly dry weather has started to put some crops under drought pressure. Rainfall this spring has been very localised rather than having periods or days of more general rain.

Winter oilseed rape crops have now all finished flowering and canopies are looking quite promising, so final yield will now be all about seed size and getting enough moisture to get full grain fill.

Wheat crops have all received their T2 fungicide applications and yellow rust has continued to be a bit problematic in some areas. A future without fenpropimorph is going to mean prevention of this disease is going to be crucial as controlling it once it has a grip in a crop is going to become more tricky.

The obvious answer is to grow varieties with good resistance, but this is not the whole answer, as is evidenced this year.

Some more-resistant varieties are showing hypersensitivity reactions to yellow rust, which has taken away green leaf area. This may not be as damaging to yield as the full-blown disease, but any loss of green leaf area is going to have some impact on yield.

T3 applications to wheat will now depend on weather, variety, and end use.

Crops that are rolled up with drought may not justify this input, while those that have seen rain will require it to top up disease control and to maintain quality.

In this part of the world the T3 always has a fairly positive effect on straw quality and this is a valuable commodity in a predominantly livestock region.

Winter barley crops continue to look promising. Many of these crops will not want to see high winds or heavy thunderstorms in the next week or two, when they are going to be at their heaviest.

Most foliar diseases have been well controlled by fungicide programmes. Going forward, life again is going to become more tricky due to the loss of chlorothalonil, which is the most reliable product for ramularia control.

I am finding it hard to understand why products that have been around for decades, with no documented problems to users, consumers or the environment, are having their licences revoked. In the case of chlorothalonil, this is particularly so as it is crucial in anti-resistance strategies.

Our regulating authorities seem to have become blinkered by rules and criteria and no longer look at the “bigger picture”. It would be a disaster if the loss of one or two key products were to lead to an accelerated breakdown in efficacy of other products we rely on.

Maize crops have got off to a reasonable start. Many crops are now on the cusp of receiving an herbicide. The loss of Calaris (mesotrione + terbuthylazine) in this sector means many are having to rethink weed strategies.

There are still herbicide combinations that will allow for good control of weeds, but Calaris was a widely used product and approaches to weed control will inevitably be different on many farms this year.

The continuing dry spell is now starting to visually show up the sharper soil types within fields.

Any moisture in autumn-drilled cereal fields from the rain three weeks ago has all but gone before the token shower we have just had. Winter cereal roots pretty much just shed dust when they are pulled up.

The sound of thunder outside as I write this is bringing slight comfort that probably some isolated areas will be getting a decent amount of rain.

However, even a good soak in places now will not restore the full yield potential of some crops, with tillers already having been dropped to divert precious moisture and available nutrients to keep the main stem and more forward tillers going.

Weed control in most crops this spring has been frustrating, early applications of mesosulfuron + iodosulfuron in winter wheat produced good levels of control.

However, with the ground being so dry, earlier than usual cracking of the ground has allowed for new flushes of grassweeds to appear in crops struggling to produce a decent canopy to allow them to smother these new competitors.

Broad-leaved weeds in some spring crops haven’t appeared with the populations usually expected, and with crop growth stages now starting to determine the end of herbicide applications, future showers of rain could produce more flushes of weeds without the ability to control them.

In sugar beet, most crops are suffering to some extent from uneven crop emergence, due to seed-bed quality and again lack of soil moisture. In-field crop development is ranging from cotyledon stage through to eight true leaves.

Broad-leaved herbicide applications are working well, even on the larger weeds, which have really taken off in certain areas.

Alongside these sprays, applications of thiacloprid are being sequenced where thresholds for myzus persicae are being met. Aphid populations will then be monitored again to identify areas that will need an application of flonicamid should numbers build to threshold levels again.