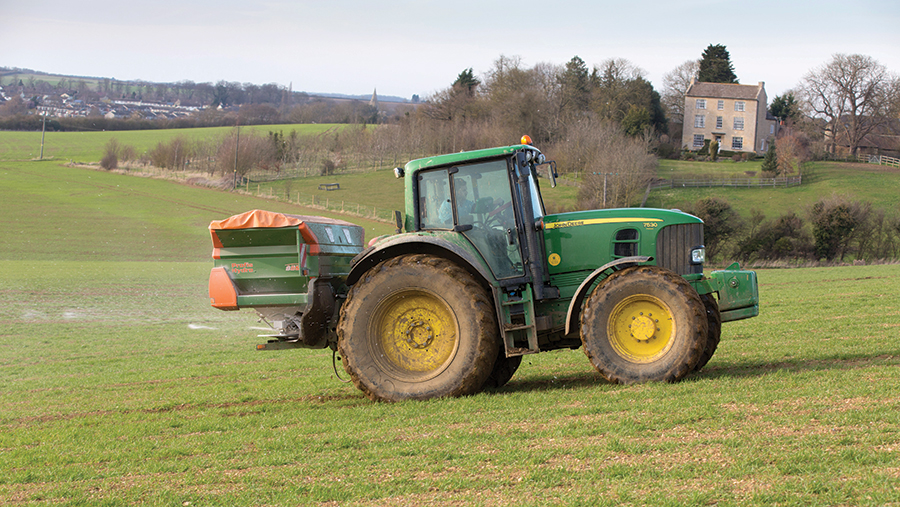 Crop nutrition remains the priority for those crops that are in the ground as growers look to maximise tillers. Where it has been possible, some crops have received their first nitrogen fertiliser and are showing the benefits.

Winter barley is looking yellow because of a lack of nitrogen, and manganese deficiency is widespread in barleys across the North West, especially crops on light land with unconsolidated seed-beds..

In the South West, concern is mounting over grassweed control in winter beans where it has not been possible to apply herbicides. Growers will need to rely on contact herbicides.

I’d like to say “it’s dried up nicely” since November. Sadly, over the past 165 days I’ve taken 589mm of rain (my annual total according to my Planet nutrient management software).

January 2020 with its almost droughty 48.6mm was the driest month here since April 2019 and February 2020 was the wettest February I have recorded in more than 20 years.

About 1,600ha of my anticipated 5,600ha of winter wheat was drilled – 300ha of which we’re wishing hadn’t been. We lost about 35% of the oilseed rape thanks to cabbage stem flea beetle and I’m still concerned about 60% of what’s left. Difficult decisions are still being taken daily.

The weather through January and February put an end to any further winter wheat going in other than on the lightest land.

However, in the first week of March and with no let-up in the weather, the reality of more than 25mm (1in) of rain every week since 23 September is that without two-to-three weeks of hot, dry and windy weather starting now, we may get no spring wheat, spring barley or spring beans in the ground either.

With this in mind, the baffling government decision not to relax the three crop rule, makes you wonder if Mr Eustice would get any fresh air at all if it wasn’t for The Archers.

Of the wheat we do have out there, septoria levels are low but widespread and yellow rust is now beginning to appear – although obviously no fungicides are planned at present.

Where travelling has been possible, 30-40kg/ha of nitrogen has already made a huge difference. There can be little or no nitrogen or sulphur left in that top 15-20cm so addressing this shortfall remains our priority.

In the surviving OSR, the first spring dose of nitrogen and sulphur has been applied, with those crops least affected by cabbage stem flea beetle now beginning to run.

Light leaf spot levels remain low, although they are now increasing – but with protection our only defence against this disease, conditions and timing are crucial. Therefore, the frosts by night and low single figures by day are holding us off.

Land following vegetables, sugar beet, potatoes and maize is so structurally damaged that it is unlikely to be drilled at all this spring.

We are doing our best to stay positive and I know a lot can change with a week of hot, dry, windy weather. Problem is though, it’s just started raining again. Bugger.

Yet another wet and windy week has resulted in more and more jobs stacking up.

The vast majority of our oilseed rape and none of our winter cereals have had their nitrogen yet and spring weed control will be essential for many. Very flinty ground needs a good roll and a big area of spring drilling hangs over everything.

Having a good proportion of downland and taking drastic action to make the most of a brief late November/early December window (such as bringing in contactors, hiring/purchasing alternative drill types) means we have about 85% of our planned winter cereal acreage drilled.

What’s more, most of it had a residual herbicide at peri- if not pre-emergence. We’ve been pleasantly surprised how well our late-sown crops are coping – above ground, at least.

Careful field-by-field nurturing will be essential, though, to help them get more roots down before the ground hardens, tiller for as long as possible and resist what could be significant lodging pressures given the high seed rates used and poor root development.

Our key priority is N for the wheats. With time racing by and workloads critical, this will be 70-80kg/ha rather than the 40kg/ha early drip-feeding we prefer. It will be supported with phosphite, manganese and zinc, and a low temperature-active plant growth regulator as early as possible.

Persistent waterlogging has been the last straw for some of our OSR. Even so, we’ve been able to bring all but 10-15% of our plantings through to the spring, and because we deliberately didn’t drill early, we’ve yet to find large numbers of flea beetle larvae either.

Wherever canopy development is reasonable, oilseed rape will be taking the back seat for spring attention. Apart from needing nitrogen, it’s not in a bad place as we included any fungicide that couldn’t go on in the autumn, together with boron and molybdenum when we applied the propyzamide in January.

Patience with spring barley drilling will be important to allow us to get the most critical winter crop work done as well as ensuring seed-beds in the best possible condition.

Where we managed to do our primary cultivation before Christmas, our lighter soils should only require a tickle to set them up. Although our winter cover crops struggled to get going, the ground under them is in far better condition than heavier land intended for wheat, which has remained bare all winter and is our biggest concern.

Barley can be sown into late April. But we won’t be shy of drilling a cover crop in any fields we have any doubt about rather than risk perpetuating problems with a late harvest and poor blackgrass control, in particular.

Sunday 1 March marked the beginning of meteorological spring. For wheat growers sowing wheat after 1 February, spring has already begun, since any wheat variety drilled after that date is classed as a spring wheat.

In practice, this means that spring wheat agrochemical label stipulations must be followed. No spring crops within the normally accepted meaning of the word have yet been established.

Those crops sown in early February within one of the few weather windows have established acceptable populations, despite pressure from flocks of corvids.

The few surviving crops of oilseed rape are starting stem extension. Damage is not limited to flea beetle larvae as many crops have root systems rotting in the ground on poorly drained soils. A dry spring will be severely damaging for these crops.

Spare a thought for the bees which will be deprived of a major nectar source. Local beekeepers are seriously concerned.

The ability of OSR to feed bees is staggering. One client with decent surviving rape has a beekeeper wishing to place 40 hives, that’s one per acre, next to his crops. The neonicotinoid seed treatment ban is a classic case of not being mindful of unintended consequences.

Winter barley is turning yellow as the effects of prolonged rain and nitrogen shortage kick in. Normally all winter barley would have received a third of its total nitrogen dose by early March. Nitrogen is still the finest and unequivocally proven bio-stimulating material.

Winter linseed has come through the winter well. Vigorous growth means that the first split of growth-regulatory fungicides is now imminent.

Concern is mounting over grassweed control in winter beans where it has not been possible to apply herbicides. All we are left with is contact graminicides, a strategy which is not ideal for resistance management.

I trust the long-anticipated and much spoken of “two dry weeks” will arrive before I write again next month.

Similar to the rest of the country, Cumbria has suffered with the recent flooding and by the looks of the weather forecast – spring doesn’t seem to be arriving just yet.

There is huge variation in crops at the moment. Early drilled cereals are looking well, with thick canopies and good plant populations.

However, crops drilled into wet, cold seed-beds later in the season (especially late-sown barley) are looking very thin and stressed. All crops would benefit from early nitrogen to encourage tiller retention – if only we could travel to apply it.

Large doses, however, should be avoided as root systems will not be able to fully the nutrients during this early growth period.

This is a year for more frequent applications along with sulphur. Compounds should be considered for early application to ensure freely available NPKS in the upper soil root zone.

Manganese deficiency is widespread across barleys, especially on lighter land and areas of poor consolidation. Even some wheats are showing deficiency symptoms, and manganese should be applied as soon as possible to prevent loss of tillers.

As we look forward to spring, 2020 is bringing new challenges in terms of disease control. There is huge variation in disease and lodging pressure in crops driven by sowing date and conditions post-sowing, therefore attention to detail will be crucial to get the best out of each field.

Along with this, the ever-changing availability of active ingredients will affect our fungicide strategy. The loss of chlorothalonil will be a big one, especially affecting septoria resistance management and ramularia control in barley. It will be important to consider a fully integrated disease management programme.

I believe there will be significant benefit in reducing crop stress through nutrition management to enhance control of ramularia. Environmental stress makes the crop more susceptible with symptoms generally appearing after incidents of stress.

However, not all is lost in terms of fungicide actives and the introduction of Revysol (fluxapyroxad + mefentrifluconazole) brings a new exciting option to the market and is likely to be a useful option for septoria control in wheat.