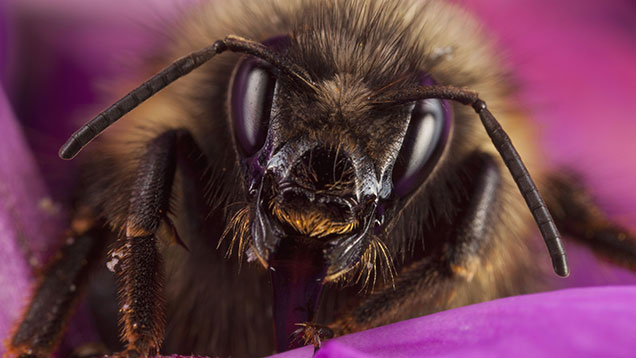 In a study said to be the most comprehensive of its kind, researchers examined data on bumblebee populations across Europe and North America over the past 110 years.

Their findings – published in the journal Science – suggest global warming is rapidly reducing the areas in which bees are found across both continents.

Many crops rely on bees for pollination and farmers are having to contend with tighter restrictions on pesticides said to be damaging to bee populations.

But the scientists warn that the scale of the losses cannot be explained by the changes in land use or applications of neonicotinoid pesticides that have been blamed for declines in bee numbers.

“These effects are independent of changing land uses or pesticide applications,” the study says.

Jeremy Kerr, lead researcher at Ottawa University, said: “Pollinators are vital for food security and our economy – and widespread losses due to climate change will diminish both.”

Previous smaller-scale studies on other species have shown that species move north, towards to the North Pole, as the climate warms. But the new findings show that bumblebee species are not relocating.

Instead, bees are disappearing over huge areas, say the scientists, so far losing about 300km from their ranges in southern Europe and North America.

Prof Kerr said: “The scale and pace of these losses are unprecedented.”

“Pollinators are vital for food security and our economy – and widespread losses due to climate change will diminish both.”
Jeremy Kerr, Ottawa University

He added: “We need new strategies to help these species cope with the effects of climate change caused by humans, perhaps assisting them to shift into northern areas.”

It was important to improve the outlook for pollinators on continental scales, said Prof Kerr. But the most important thing was to begin to take serious action to reduce the rate of climate change.

The study comes as the NFU considers making a second application to Defra for farmers to use neonicotinoid-treated seed when planting oilseed rape this summer.

An initial application by the union was rejected, although the government says it is still considering whether to grant permission for farmers to use the chemicals.

Campaigners from Friends of the Earth, 38 Degrees and Buglife lobbied Downing Street on Tuesday (7 July), urging the government to reject any request for growers to use the chemicals.

Scientific studies have linked neonicotinoids to declining pollinator populations, but the NFU disputes the findings.