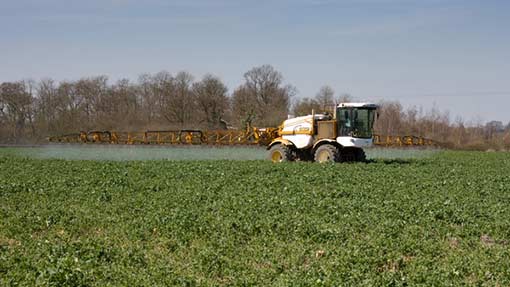 Oilseed rape growers are being urged to hold off with their first spring nitrogen fertiliser dressing and possibly cut overall rates on forward current crops.

Mild winter weather has resulted in many lush crops and an early dose of nitrogen could prompt excessive top growth, reduce standing power and induce lodging.

Crop experts believe that delaying nitrogen and using plant growth regulators (PGRs) will be essential to avoid this season being one of the worst on record for crop lodging.

He advises delaying the first nitrogen dressing for big proud plants until the green bud stage, or into the second week of March for many crops.

In addition, current forward crops will have taken up a lot of nitrogen already, which may allow growers to cut their overall level of fertiliser, Dr Berry adds.

The fear this season is that if crops are fed with nitrogen too early they may become too dense or put on a lot of top growth at the expense of stem strengthening and rooting.

Richard Elsdon, technical manager at co-operative United Oilseeds, says crops are clearly in a much better condition than last spring when oilseed rape was plagued by pigeons.

“We would advise no nitrogen, no sulphur, no nothing until the crop is about 6in.”
Richard Elsdon, technical manager, United Oilseeds

“We would advise no nitrogen, no sulphur, no nothing until the crop is about 6in,” he says.

Mr Elsdon advises a three-way nitrogen split – when the crop is 6in, 12in and then the final dose when knee-high – and again says some crops may need less nitrogen fertiliser overall.

He adds that with heavy showers still forecast there is no urgency for most growers to travel on the land until weather is drier and ground conditions improve.

Philip Marr, oilseed rape expert at distributor Agrii, advises a longer delay as many forward crops have plenty of rooting and strength, so they should not have any nitrogen until late March.

“To ensure the most productive and robust canopies it will be vital to avoid giving them too much early nitrogen,” he says.

“Putting more than a small amount on early could do more harm than good, as well as being extremely wasteful,” Mr Marr adds.

He says winter oilseed rape crops that flatter early on with vigorous growth often deceive later as they do not produce the right canopy structure for bumper harvests.

Perversely, crops that look thin through the spring, such as in 2011, produced the highest average yield on record at 3.9t/ha and a bumper UK crop of nearly 2.8m tonnes.

Some growers may be able to reduce overall nitrogen levels from an average national rate of about 180kg/ha, or at least back load application later into the season.

Dr Berry advises using green area index (GAI) measurements to assess current crops. This is done by cutting a 1sq m of crop and multiplying the crop’s weight in kilogrammes by 0.8.

For any crop with GAI of more than 1.5 then growers should be looking at reducing the first split of nitrogen and those more than a GAI of one should consider a PGR, he adds.

For this season, he says more than 50% of oilseed rape crops are at risk of lodging, and lodging costs the UK oilseed rape industry on average more than £130m a year.

He suggests using triazole fungicides with growth regulation properties, such as metconazole or tebuconazole, at the green bud stage through to early flowering when the risk of lodging is high.

Mr Elsdon says PGRs will be very relevant this season and suggests using one of these two products at a full rate from the green bud stage.

Mr Marr agrees and says applying a good growth regulator fungicide at early stem extension along with delaying nitrogen and being sparing with it will ensure the most productive crop canopies and best-standing crops.