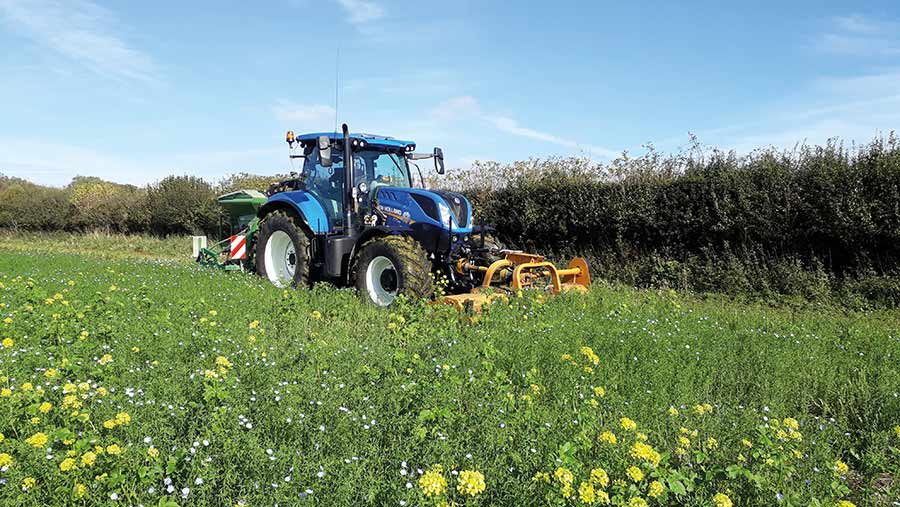 Dorset grower John Hawkins admits that he operates a “weird” type of farm, having decided to look at how the business can add environmental value while still producing food.

In what he described as a self-financing, self-designing experimental farm, Mr Hawkins operates a very low-input farming system based on regenerative principles, designed to bring rewards for wider environmental and biodiversity gains.

Having fully embraced the “public money for public goods” mantra, he is in the process of building natural fertility and storing carbon on the 239ha arable farm near Blandford Forum, while reducing nitrate leaching and providing for wildlife.

He has also become far less reliant on artificial inputs and has taken out some of the financial risks previously involved in crop production – but accepts that he’s had to keep an open mind and try things that he didn’t initially believe would work.

“It’s about striking the right balance between input and output, risk and reward,” he says. “We now do weed management, rather than weed control, and run a very flexible system which delivers for everyone.”

His light-bulb moment on weed management came on a trip to France, when he saw how Base pioneer Frederic Thomas was working with nature to grow food.

Since then, bold decisions have been made, with Mr Hawkins being adamant from the start that the economics still had to work.

To that end, he entered the farm into a Mid Tier Countryside Stewardship scheme in 2017 and has also received support from Wessex Water for arable reversion, as the farm is  close to one of its main boreholes.

Getting the funding has enabled the farm to become one big trial site, with various organisations benefiting from the results and learning from the outcomes, as well as Mr Hawkins.

Winter cereals were identified as a potential problem for nitrate leaching, so wheat is no longer part of the rotation, and nor is oilseed rape. 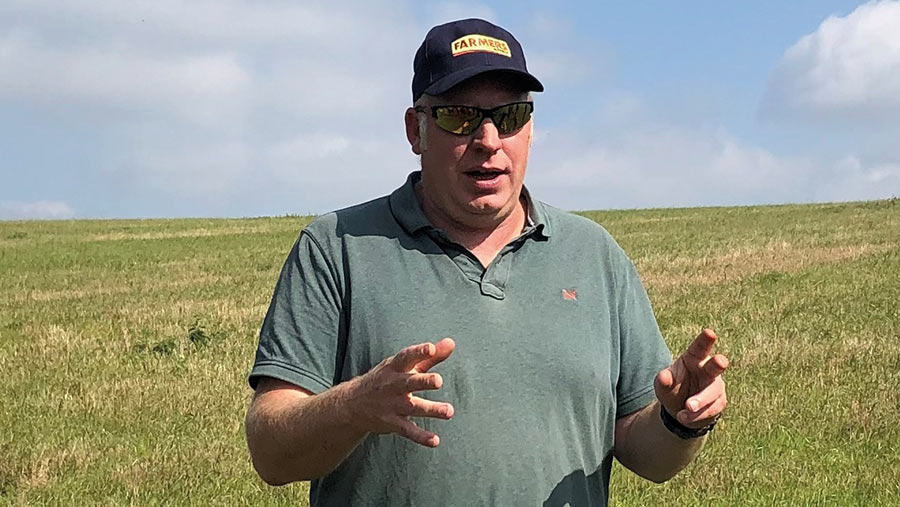 Instead, Mr Hawkins is now growing low-input spring barley following overwinter cover crops, options SW6 and AB14 (£380/ha) on half of the farm, with the remainder being in AB15 (£522/ha), a two-year legume fallow.

Both give him a guaranteed income, with the two areas then being flipped after two years and continued across the farm. Small areas of pollen and nectar mix (AB8) and wild bird food (AB9) bring in additional income.

Spring barley yields are about 1t/ha lower than before the changes were made, but quality has been maintained and the costs of growing it are also much lower.

Weed populations don’t get the chance to build up as they did before, and wildlife is flourishing on the farm, especially in the two-year fallow areas.

Growing good cover crops and avoiding bare stubble has had an immediate effect on nitrate leaching, with Wessex Water monitoring levels and showing that it is now at 12-15kg/ha/year, well below the Environment Agency’s voluntary target of 24kg/ha for the Poole Harbour catchment.

That target will come down to 18kg/ha by 2028, points out Mr Hawkins, so the pressure is on for local farmers to make the best use of Environmental Land Management (ELM) and other nature-based initiatives to make changes.

“They may find that they have to change some of their management practices and opt for schemes that help to finance that,” he says. “Maize, for example, can be a real problem for nitrates – under-sowing might be a practical solution.”

At Bagber Farms, a form of relay cropping is practised, with drilling into the cover crops in the spring taking place and cover crops being spun on into standing cereals.

Drilling cereal crops uses just six litres/ha (check) of diesel, with most of the soil being left undisturbed.

His production costs are very low – a crop of linseed grown this year was broadcast onto the ground and received no chemical inputs at all. Reed canary grass, which he has grown previously, also required no inputs.

“If they hadn’t succeeded as cash crops, they would have become cover crops,” remarks Mr Hawkins.

“Living roots have a major role to play in building soil carbon, for which I’m hoping to be paid in the future, so it still would have met my objectives.”

He also hopes to hit soil organic matter levels of 10% before too long. He’s already at 6-8% and believes levels will keep building as the system matures.

“That should open up new markets and opportunities for the business – bringing reward and recognition for our sustainable farming practices.”

Other benefits he has seen over the years include a reduced workload, more resilient soils and a business that is far less affected by market volatility.

He joined the farmer-led organisation Base-UK three years ago and has been encouraged to find other open-minded farmers among the membership, most of whom are willing to share their learnings and try out new techniques.

“It’s good to know that I’m not out on a limb,” he says. “My neighbours thought I was mad when I started this journey, so the support is welcome.

The Base-UK webinars and farm visits are also very useful.”

Pushing the Boundaries is a Farmers Weekly series featuring farmers who are thinking differently and changing their farming practices. With agriculture facing an uncertain future, we talk to growers who are taking bold action to achieve their goals, such as farm manager Tim Parton, who is achieving high yields with fewer chemical inputs.