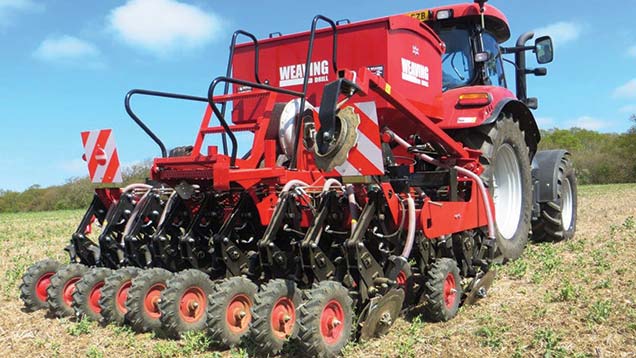 Weaving Machinery is one of the makers leading the charge at next month’s Cereals event with its new zero-till GD drill.

The company has been working with Lincolnshire farmer Tony Gent to develop a patented GD coulter, which is said to give low soil disturbance and a modest draft requirement of 40hp/m.

The design is based on a double-disc arrangement, mounted at a 25deg angle from vertical, which pivots around a central king-pin mounted within the coulter body.

The larger leading outer disc cuts an opening slice in the soil while the smaller inner disc forms an opening for the seed to be placed precisely. The lifted soil is quickly firmed down on to the seed by the single press wheel, which also acts as a depth regulator for the disc coulters.

Drilling depth is adjusted by moving a single pin into a bank of holes with a depth range of 0-130mm in 15mm increments. Coulters are individually pressurised by a hydraulic system giving up to 200kg of downwards pressure. This is said to help maintain consistent contact with the ground and follow contours and undulations.

An inter-row clearance of 1,000mm means the coulter can work in very trashy conditions and with cover crops, says the company, as well as on all cultivation systems and soil types.

Trailed variants aimed at large farmers and contractors come in widths from 4-8m and are mounted on Weaving’s existing 2.5t seed cart. Prices start at £42,700.

All drills are fitted with RDS electronic metering as standard with six coulters per metre at a minimum row spacing of 167mm (adjustable), roll over cover, tank sieve and work lights.