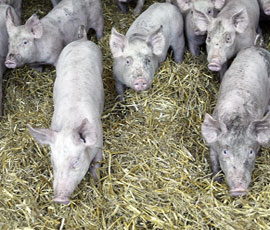 A serious shortage of livestock bedding means arable farmers are being urged to bale more straw this harvest.

The National Pig Association said it hoped growers would bale all available straw this year – including rape straw.

“There is going to be a significant straw deficit in the eastern half of England,” said Howard Revell, chairman of the NPA producer group.

“We need all arable farmers to go the extra mile to help keep their pig farmer customers in business.”

Many of England’s pig producers are already paying record prices for the 350,000t of cereal straw they use every year.

Doing so earns them a small welfare premium over continental producers, who finish pigs mainly on slats.

Alternative products include pea straw, woodchips and sawdust. But the most successful alternative is rape straw.

“Many arable farmers would not normally think about baling their rape straw, but this year they will almost certainly find it worth doing,” said Mr Revell.

“The pig industry is an important customer of Britain’s arable farmers and we are relying on them to help us through this difficult period.”

Farmers who have cereal or rape straw to sell can contact the NPA through the organisation’s website at www.npa-uk.org.uk.