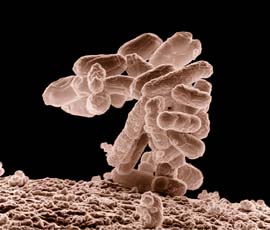 German medical officials have identified an organic farm in Lower Saxony as the most likely source of the E coli outbreak which has killed 22 people and left 2,000 ill.

The farm near Uelzen produces beansprouts and has been linked to many of the cases. It is yet to be confirmed officially and an announcement is expected on Monday 6 June.

The agriculture minister for Lower Saxony, Gert Lindemann, said: “Further evidence has emerged which points to a plant nursery in Uelzen as the source of the EHEC cases, or at least one of the sources,” he said.

An official for the agriculture department said definite proof would depend on test results, but “a connection has been found involving all the main outbreaks”.

The farm is about 100km (62 miles) south of Hamburg and supplies restaurants and markets in the city and neighbouring German states.

The alleged location of the source contradicts earlier reports that the disease had been spread by cucumbers form Spain.

A strain of the bacterium was reportedly found on cucumbers in Germany which had been imported from two Spanish organic cucumber distributors in Almeria and Malaga.

It now appears that allegation was wrong and Spanish farmers are claiming compensation for losses totalling £120m a week after their market collapsed.