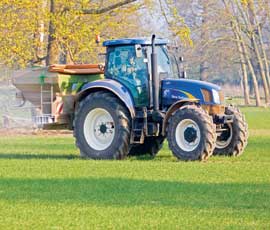 Tweaking nitrogen fertiliser timings can boost alcohol yields from wheat crops, worth up to £1m to the biofuel sector

Applying a greater proportion of nitrogen fertiliser earlier can increase alcohol yields by up to 8 litres for each tonne of grain, according to new research.

With the Ensus bioethanol plant now running at full production in Teesside and the Vivergo plant on Humberside expected to open later in 2011, there is a market for around two million tonnes of wheat for bioethanol production in the north-east of England. This is in on top of the 800,000t already used for whisky production.

The amount of bioethanol produced for every tonne of wheat grain and per hectare can be heavily influenced by variety choice and agronomy, says ADAS research scientist Daniel Kindred. “High starch, low protein grain gives higher alcohol yields. It, therefore, follows that the amount and timing of nitrogen applications will have an impact.”

This is because higher protein levels in grain result in lower bioethanol yields. “It is known that grain protein can be increased by delayed nitrogen applications and there are good reasons to suppose that earlier nitrogen can give lower protein grain.”

To confirm whether earlier fertiliser applications can give improved bioethanol yields without compromising grain yield, Dr Kindred carried out a series of seven trials, sponsored by the North East of England Process Industry Cluster, in association with North East Biofuels and One North East.

The trials were conducted in 2009 and 2010 at sites in the north and east of England, with a range of soil types and rotations. Six nitrogen fertiliser rates were applied ranging from 0 to 1.66 of the recommended rate, according to The Fertiliser Manual and soil mineral nitrogen (SMN) analysis.

Results showed that in five of the seven experiments, applying a greater proportion of nitrogen fertiliser earlier significantly increased alcohol yields by up to 8 litres/t of grain. Applying nitrogen earlier did not adversely affect grain yield, he says.

“What was interesting was that at two of the three second wheat sites, applying more nitrogen early significantly increased grain yields by over 0.5t/ha.”

While the effect of fertiliser timing is relatively small in relation to differences seen between sites, varieties and nitrogen rates, early timing seems to fairly consistently improve alcohol yields by around 4 litres/t of grain. Such a difference may be worth more than £1 a tonne of grain to the bioethanol processor from increased revenues, after any negative effects on quantity of the by-product dried distillers grains with solubles are accounted for.

Although the additional value is small on a per tonne basis, if such timing effects are consistent and give no yield, management or financial penalty to the grower, Dr Kindred estimates that the benefit of adopting early nitrogen timing equates to an extra £1m a year of extra bioethanol production.

The large yield benefit from early nitrogen application in second wheats may have much wider implications. Further testing is required to evaluate whether applying more nitrogen early in the season where soil N supplies are low is beneficial to grain yield across soil types, regions and seasons, says.

However, he cautioned that both the 2009 and 2010 seasons were characterised by cold winters followed by dry springs, so crops were generally small in spring and early nitrogen applications did not result in overly large crops.

“Lodging risks were low and we saw no serious lodging at any of the sites.”

The possible increased risks of applying nitrogen early in warmer and wetter springs on lodging remains unquantified. In addition, he pointed to the increased risk of fertiliser nitrogen being lost from the soil by leaching or denitrification, but again this is untested and further work is required.