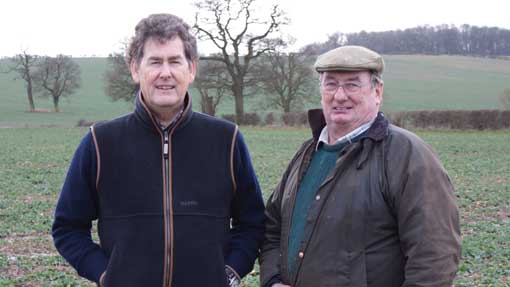 The new hybrid oilseed rape variety Incentive sits at the top of the HGCA Recommended List for both the East/West and the North regions in terms of gross output. Louise Impey finds out what it has to offer from some early adopters

Seed merchant Geoff Williams (pictured left) took a bold step last year and sourced as much seed as he could of the new oilseed rape variety Incentive as it looked to offer the right characteristics for his East Midlands region.

He had watched the DSV-bred hybrid come through the national testing system where the variety’s consistence impressed him, and that early promise was confirmed as it made the HGCA Recommended List last December.

Although Incentive heads both lists for gross output with 105 in the East/West and 107 in the North, yield isn’t everything for his customers who look for varieties to perform well whatever the season.

“It was its consistent performance, across all trial sites and over a number of challenging years, which really caught my eye,” says the Nottinghamshire-based seed merchant.

“Farmers are looking for rapid establishment, good yield and oil content, plus a solid agronomic package. There has to be strength in the genetics, as well as the numbers,” Mr Williams adds.

He believes his heavy clay soils are to blame with establishment being particularly difficult in some autumns when he is pleased if he gets 50% germination.

This season, in an attempt to improve this early stage of the crop’s development, his entire 104ha of oilseed rape is down to Incentive.

“Crop failures in 2012 were a wake-up call. I need varieties with really good vigour, so that they get away quickly, and have good winter hardiness,” he says.

Oilseed rape follows wheat in the rotation at Hill Farm, Widmerpool, so is often going in later than he would like. “As a result, it just has to get up and go as quickly as possible,” Mr Garratt adds.

He took Mr William’s advice about Incentive and committed a sizeable area to the variety. Drilling started on 26 August and was finished by 4 September, with a target seed rate of 50 seeds/sq m.

“It grew well from the start, even when it turned dry. Its early vigour seemed to help it grow away from early disease and pest attack. And the mild winter hasn’t caused it to get too leggy,” he says.

The crop hasn’t suffered from any pigeon damage. “It’s surrounded by woodland but the pigeons don’t seem to like Incentive,” he reports.

Compass has given yields of 5.5t/ha in the last few years as hybrids have started to prove their worth at his farm at Epperston, near Newark.

The farm’s very fertile soils have contributed to lodging with some other varieties, so stem stiffness and lodging resistance are key requirements.

He looks for rapid establishment – in order to outgrow blackgrass and deter pigeons – as well as good standing ability in an oilseed rape variety.

“The good results we’ve had with Compass are the reason for trying 52ha of Incentive this year. The varieties are from the same stable,” he explains.

Mr Peake drilled the crop at the end of August at a seed rate of 50 seeds/sq m, following barley, and establishment was very good.

“Just as important for us is that it picked up well in March and has since developed a well-branched canopy,” he says.

Mr Peake also likes the variety’s earlier maturity as an early harvest allows him to get the cultivator in and get a good chit of blackgrass ahead of the following wheat crop.

Simon Kightley, NIAB TAG’s oilseed specialist, says that being top of both lists is a special feature and shows that Incentive has broad UK adaption. With good scores for lodging and stem stiffness, Incentive is relatively tall and has the typical high biomass that is expected from hybrids, he adds.

“It has early flowering and medium maturity. Although its disease resistance is not outstanding, it can be easily accommodated with well-timed fungicides,” he says.