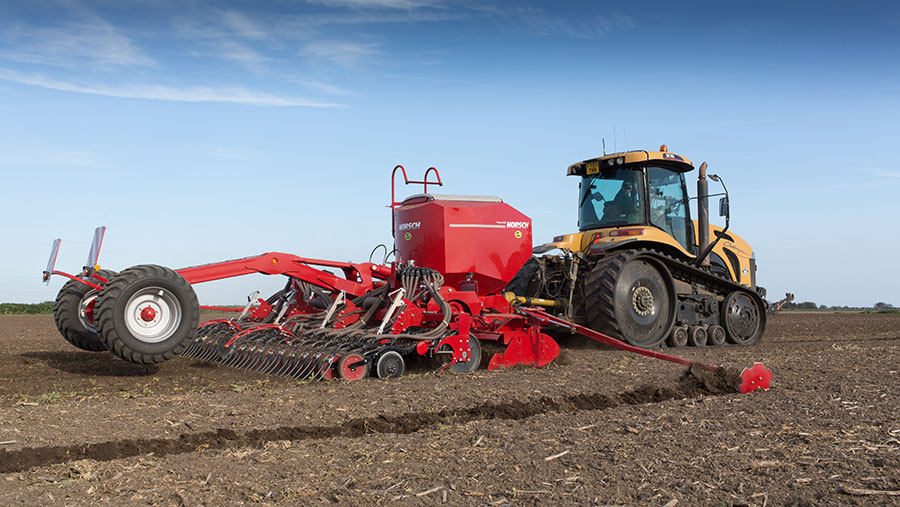 Establishing any crop amid pressures of autumn workloads, variable weather, pest, disease and weed threats is never an exact science.

What works on one farm, field or soil type may not suit another, so flexible management adapted to individual situations is key.

Soil type and cultivations have the biggest impact on establishment, so good soil management is essential whether you’re a direct drilling advocate or die-hard ploughman.

“You’ve got to get the basics right, which means first addressing any constraints to germination, emergence and root development,” says Strutt & Parker’s Jock Willmott.

“On all land, soil usually moves and behaves better when cultivated dry rather than wet, so try to prepare ground early in the best conditions possible. That may not be achievable where ground has baked hard over summer, in which case wait for adequate moisture.”

Compaction or drainage issues must be identified and corrected before drilling to avoid compromising root growth and tillering capacity, he adds. Although there is little mechanical damage from this harvest on dry soils, problems caused earlier this season may need correcting.

“Cereals and oilseed rape roots can grow down to 2m, but most stop short of this, with typically 60-70% of roots found in the top 50-60cm,” adds Bob Bulmer from Hutchinsons.

This effectively cuts out a lot of potentially available soil moisture and nutrients, so any measures that encourage deeper rooting should benefit crops through the season, he says.

North Yorkshire agronomist Patrick Stephenson says the dry summer resulted in a lot of deep soil cracking, which provides “fantastic natural structuring” that must be considered before going in with a subsoiler or deep-tine cultivator.

Establishment usually falls as temperatures/day length decline, and seed-bed conditions deteriorate into autumn. Slow-emerging crops may also be at greater risk from pests and disease.

The AHDB Wheat Growth Guide says crops require 150 °C days from sowing to emergence, which typically equates to 11 days in September, 15 in October and 26 by November.

Average establishment decreases from around 70% for September-sown crops to less than 50% from November onwards.

Tillering capacity also falls, with an extra 50 plants/sq m required to compensate for reduced tillering for each month drilling is delayed.

There are often good reasons for later sowing, such as grass weed control, rotation, variety characteristics, workloads, or pest, disease and lodging management, but in doing so growers must be realistic about likely establishment.

“Establishment is pretty much determined in the first month after drilling, so you can get a good idea by counting plants soon after all rows are visible, usually around the two-leaf stage,” says Adas’s Roger Sylvester-Bradley.

Growers can get a good idea of establishment success by counting plants soon after all rows are visible, typically around the two-leaf stage © Tim Scrivener

“Seed is a relatively low proportion of the total cost of growing wheat, so make sure you’re sowing enough, even though wheat is tremendously good at compensating.”

Growers should plan seed rates by working back from their target yield, considering the ear numbers, tillers, established plant population and seeds required to achieve this, Dr Bulmer says.

In non-black-grass situations, Prof Sylvester-Bradley recommends drilling winter wheat earlier (mid/late-September) aiming for a “modest” plant population of around 200 plants/sq m that is well-supported to maintain growth and tillering through autumn.

“Establishing 200 strong plants that each produce three tillers provides a good foundation for a high-yielding crop. If September establishment is 70%, that means sowing 275-300 seeds/sq m,” he says.

Mr Willmott says many farmers are still too economical with seed, especially when drilling later for blackgrass control.

“A lot of drilling is done well into October or November, so emergence, tillering capacity and seed rates are fundamentally different to September-sown crops,” he says.

Depending on conditions, establishment could be just 50% by November and crops may only produce two ears per plant, so achieving 600 ears/sq m requires higher seed rates to get the required plant population.

“Rather than making a massive jump, try edging seed rates up 15, 20 or 25% to see what gives the best yield response.”

He acknowledges treated seed cost is a concern at higher seed rates, but suggests there may be scope for more farmers to have seed dressed then to apply chemical treatments on a just-in-time basis at drilling.

“That way, if you’re using high seed rates late in the year and can’t get on to drill, the dressed, untreated seed can go back onto the heap if it’s not used.”

Alongside nitrogen, potassium and manganese, phosphorus is particularly important for early growth, and analysis of grain samples within YEN suggests many crops may benefit from additional P early in the season.

“Most phosphorus comes from inherent soil supply, but in the early stages when crops need a good supply, they don’t have the root structures to access it,” he says.

“The efficiency of seed-bed phosphate is quite low and phosphorus also gets locked up easily, particularly in calcareous soils.”

There may be slightly better nutrient recovery from placing fertiliser with seed at drilling. However, he acknowledges it is not clear how best to improve early phosphorus supply – other options include mycorrhizal fungi to increase root uptake, foliar products and seed treatments.

“Check soil carefully and don’t assume a deficiency,” cautions Mr Willmott. “Often we find physical reasons, such as poor structure or drainage, stop roots picking up nutrients rather than a deficiency.”

“If conditions go against you, such as heavy rain immediately after pre-em application and not drilling seed deep enough, a 15-20% loss from a heavy spray stack is possible.”

Wheat can have a competitive effect against blackgrass, provided established plant populations are high enough, typically around 250-300/sq m, he adds.

“A lot of new varieties are quite tall, so there may be more lodging risk at higher seed rates, but it’s a risk worth taking as lodging can be managed with nutrition and growth regulators.”

There are various ways of doing it, from digital systems based on soil conductivity scans and multi-tiered analysis to hand-drawn maps that provide a prompt for the drill operator to manually alter rates.

“Whatever option you use, the process gets refined over several years and is a great way of achieving more consistent yields.”

Before going down the variable seed rate route, growers are urged to assess reasons for poor establishment and see if causes, such as drainage, poor soil structure, weed or pest pressure can be rectified first.

“Don’t use variable seed rates in isolation,” says Prof Sylvester-Bradley. “If there’s part of the field that’s low-yielding, ask why that is, to see if there are ways to improve establishment.”

Although Mr Stephenson sees good reasons for using variable seed rates in some precision-drilled crops, he is still to be convinced about the benefits in wheat.

“For example, do you put more seed on a chalky hillside with thinner soil to compensate for lower establishment or cut rates back so there are fewer plants drawing on the limited moisture and nutrients? We need more data to show how we best utilise variable seed rates in cereals.”