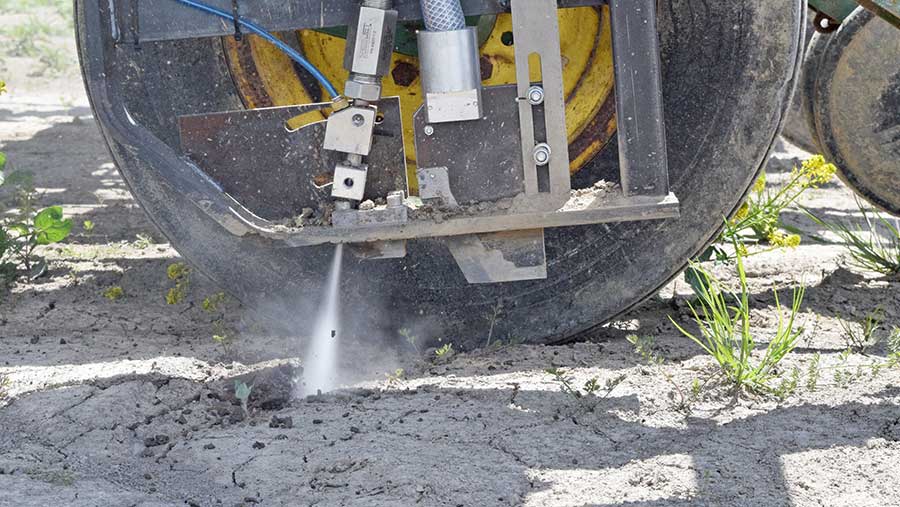 Replacing drill coulters with a high-pressure jet to open up the soil will not only improve germination, its inventors believe it can aid rooting by cracking compaction and aerating soils.

Many growers have adopted direct drilling as a means of improving soil health by reducing cultivations. However, direct drilling has its drawbacks – one of which is hair pinning.

Most direct drills rely on a disc coulter design to open up the soil for seed placement, but cutting through trash can be challenging, especially when it’s wet.

That’s because if the disc fails to cleanly cut through the trash, it can end up pinning it in the slot, leaving seed suspended with no contact with soil. This seed will then fail.

One Canadian technology firm believes it has the answer – ultra high-pressure water.

“Industrial cutting has been using water for 40 years, to cut stone and steel,” says Jeff Martel, applications manager at I-Cubed.

The company, based at the western end of Lake Ontario, specialises in developing robotic machinery and waterjet equipment.

He says they started developing it several years ago and were also involved with a project funded by the Australian government.

It was during this time in South Australia that Mr Martel saw the huge potential that high-pressure water has to offer for crop establishment and decided to do the same in Canada.

They are now in the fourth year of drilling trials.

The main purpose of the waterjet is to cut through residue and it has proved very effective, cutting when both wet and dry.

It even cuts through very tough material such as Bermuda grass, which some farmers in the US use as a cover crop.

They have found that the system works better when the trash is gently squashed, as air pockets reduce its effectiveness.

Therefore, the jets are mounted within a metal shoe that pushes down the residue.

“At reasonable planting speed and the right orifice, it can cut through 2in of compressed trash,” says I-Cubed chief executive Dave Bunker.

They also found that it cuts into the soil, far enough for seed to be placed. “In typical soils, it will cut down 100mm.”

But it’s not just creating a seeding slot, the system is also pumping a lot of air into the ground, which is loosening the area around the seed.

Mr Martel believes this can prove useful if drilling into a cover crop that has been grazed, with animals causing some surface compaction.

“Roots can’t grow through compaction, so this is helping.”

Mr Bunker points to the greater rooting mass being seen with plants established using the waterjet.

“Soya plants that have been drilled with the system have more nodules on their roots.

In one trial carried out in 2017, they saw a 16% higher yield for the soya rows planted with the waterjet compared with those drilled with a conventional direct drill.

“When we dug into the ground, plants had three to four times more root mass despite being planted on the same day,” says Mr Bunker.

He believes the crop performed better because the waterjet opened up soil allowing roots to reach water further down, as it was a dry season.

Last year, they tracked root growth and noticed straight away the crop established with the waterjets had better crop growth.

Unlike conventional discs that are less effective when residue is wet and soggy, the high-pressure water is effective in wetter climes, ideal for the UK and Ontario.

That’s because you tend to get more residue with higher yielding crops in wetter climes. “There is so much more to cut through and this is more difficult when it is wetter.”

Another advantage is that it effectively extends the drilling season as farmers can start earlier in the day and can go through the night if needed.

Farmers with disc-based drills often stop when there is dew, but the waterjet can keep going round the clock, he says.

They have been drilling for four years now and are looking investment to build a bigger machine, along with five two-row demo units.

The current prototype is six-row and they are looking to adapt a new 24-row commercial planter.

Not only could the technology be taken on by a drill manufacturer, they are also looking to develop retrofit kits, so that farmers can fit the system to their existing drill.

The waterjet effectively replaces the disc opener, cutting a slot for the seed to be placed.

Behind this is a keel (smaller version of a mole) that runs through the seeding channel to control seeding depth.

The slot is then closed using two angled discs.

The waterjets are a very fine stream “like a hair” and at a very high pressure, using a pump that generates 60,000psi.

Jeff Martel points out that the fluid rate is no greater than applying liquid fertiliser, so farmers don’t need to carry large quantities of water.

In fact, he believes they could eventually deliver nutrients via the waterjets, so effectively using fertiliser to cut the seed channel.

Another key difference with conventional direct drills is that no downforce is required.

Therefore, drills can be built with much lighter frames, so reducing the compaction risk.