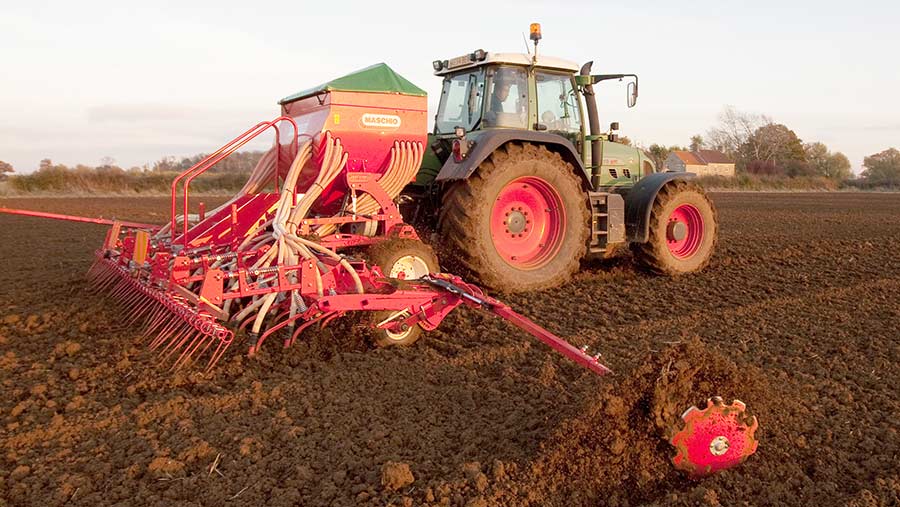 Growers have the potential to achieve good crops of winter wheat even if they are drilling into November, if they choose the right seed rate, varieties and opt for a seed dressing.

Weather conditions have been consistently wet for the first half of October, pushing many growers to drill later than they normally would.

However, so long as the weather breaks long enough for growers to get their pre-emergence herbicide programmes on, good crops can be established right up until January in some areas, says Kathryn Hamlen, technical manager of conventional cereals at Syngenta.

“Although it has been wet, growers drilling from mid-October and November onwards is normal for blackgrass control,” she says.

Soil type will be the deciding factor for when growers will be able to get out and drill, although as a general rule, those in Scotland are unlikely to drill beyond the end of October unless autumn is really kind.

After October, most Scottish growers will swap to a spring crop, while those in East Anglia can theoretically drill some varieties of winter wheat right up until the end of January without affecting vernalisation.

But, Mrs Hamlen warns that growers should have a cut-off point if they risk damage to their soil structure.

“If there is a history of not getting pre-emergences on, think of the economic risk to crops. Would it be better to go with spring crops?

“It’s a bit of a toss-up, for the next couple of weeks it could continue to be wet, but then go dry in November and then growers could get a chance.”

Variety choice and seed rate will be critical to the success of crops as the autumn progresses.

Gleam, the highest-tillering Syngenta variety, should be sown at 350-375 seeds/sq m in October, rising to 400 seeds/sq m in late November, she advises.

However, these rates can be tweaked for varieties such as Shabras and Graham which don’t tiller as much as Gleam.

Of Syngenta’s winter wheat varieties, Gleam and Shabras are the best options for late drilling.

Gleam in particular has shown itself to be extremely flexible in trials, producing similar yields regardless of whether it is drilled in September, October or November.

While there are risks to drilling late, growers will benefit from a reduced risk of septoria as crops will be exposed to fewer cycles of the disease, although varieties rated four for resistance will still need treating.

The risk of yellow rust should also decrease, although it can be quite volatile, she warns.

Although the risk of some crop diseases decreases as the autumn progresses, the risk of soil-borne microdochium producing fusarium in crops increases, and growers should look to protect their crops by using the right seed dressing.

“Quite a lot of growers will have already bought their seed and coating for this season, but Vibrance Duo (fludioxonil + Sedaxane) is an excellent choice for late drilling,” says Mrs Hamlen.

In trials, crops drilled after 20 October achieved a 0.4t/ha uplift in crop yields where Vibrance Duo was used over alternatives, she adds.

The risk of losing plants to seedling blight as a result of microdochium only increases as conditions continue to become wetter and colder, with the biggest uplift in yield as a result of the seed treatment being seen in November onwards.

Cambridgeshire grower Tim Scott switched to late drilling two years ago in an effort to curb the increasing population of blackgrass at Manor Farm.

Despite only being able to drill in good conditions because of his heavy boulder clay soil, Mr Scott is on-track with his drilling, with nothing in the ground before 15 October.

This allows him to establish stale seed-beds before drilling to help control the high population of blackgrass.

“As farmers we suffer from massive peer pressure of thinking that if someone else has drilled then we should be doing it as well,” he says.

“In theory, the longer the crop is in the ground the better the yield will be, but we were having the odd year with tonnes of blackgrass, and I thought I’ve got to do something drastic.

“Two years ago, I decided I was just going to have to put the blinkers on and hold fire.”

Last year Mr Scott drilled right up until 5 November, but admits the last crops drilled weren’t terribly successful and he would normally abandon drilling his crops after this date.

However, a neighbour who took a window of opportunity three weeks later achieved a good crop, although it is a very high-risk game, he says.

“If we are getting to the time of year where there are frosts, which are usually followed by sunny days and dry weather, then there may be more opportunities, but generally I would say that everything is going against you.”

Usually Mr Scott would look for a window of four days to give him a day each to spray off his seed-beds with glyphosate, drill, roll, and then apply his pre-emergence herbicides.

While he is relatively flexible on drilling date, Mr Scott would abandon drilling if he couldn’t get his pre-emergences applied rather than risk weedy crops, switching instead to spring crops which he makes profitable by using a low-input regime.

Mr Scott grows varieties Gleam, Shabras and Graham, although these are chosen for their ability to be grown with a lower input regime rather than their tolerance of a later drilling date.

Seed rate and depth are also crucial to achieving a good result, with Mr Scott using between 200-220kg/ha which he drills with a tine drill to achieve a consistent depth.

“You don’t want to put the seeds in too deep, and the tine drill does give me greater flexibility to travel as it’s not very heavy,” he says.

Mr Scott also uses a seed dressing to achieve a quick and even establishment of the crop.

“If there are staggered depths and seed treatments are slowing germination then this increases the risk of pests. I can have a problem with rooks and crows pulling out the seeds looking for food. If the crop comes up quickly and evenly then it’s not a problem,” he says.