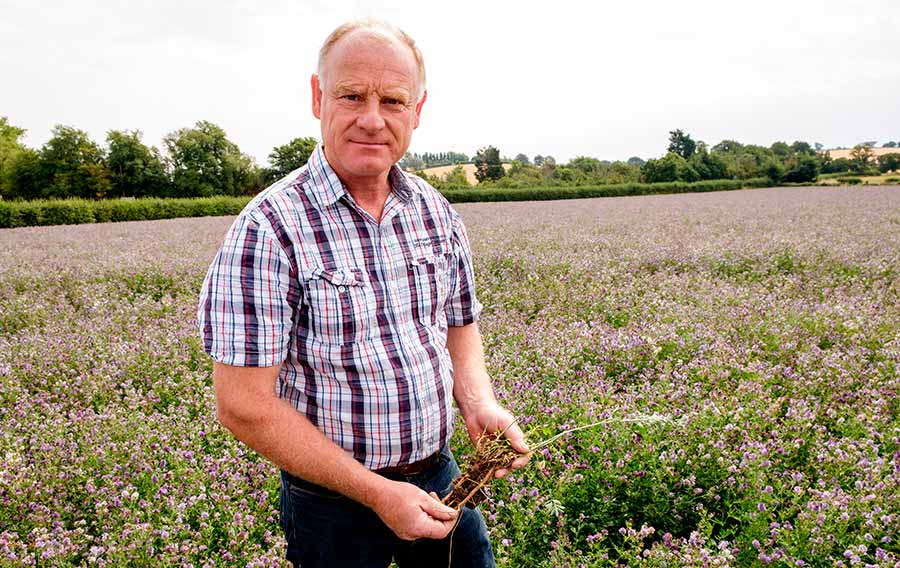 Flexibility is the key to success for two no-tillage converts who farms very different arable areas – in some of the driest and wettest areas of Britain.

Simon Cowell has been direct-drilling for the past 15 years on his heavy Essex clays using two drills and tries to avoid any straw residues which can cause poor germination in this dry area of Britain.

Meanwhile, Will Scale, in the wetter climate of west Pembrokeshire, has been a no-tiller since 2006 and bales all his straw, again to avoid straw residues, but has the flexibility to return to minimum-tillage for establishing his oilseed rape.

Mr Cowell has been refining the best way to conduct no-tillage on his farm, and most of his crops go in with a tined Simtech drill, with the focus on avoiding drilling into wet chopped straw.

“Our biggest problem is straw residues and how they break down,” he told the Groundswell Event on regenerative agriculture on the farm of John and Paul Cherry in Hertfordshire.

He now drills his autumn cereals only into long stubbles or crops that have been combined with a stripper header, or when the straw has been baled. Ahead of spring crops, he cuts his stubbles short and chops the straw fine, giving six months for the worms to take all the straw down into the soil.

One of his biggest problems is that on his clay soils the drill slots open up when the land dries out so he needs to lightly harrow and roll his land to close up these slots after drilling.

He tends to use his Moore disc drill for wheat after linseed cut with a stripper header, especially on his light land which will not smear.

Using this flexible no-tillage system he has been able to cut out phosphate and potash fertiliser use, and uses less nitrogen, fungicides and diesel.

“We can now reliably establish crops without any cultivation,” he says. “We now have a golden opportunity to utilise natural soil life for fertility, plant heath and zero water and air pollution,” he says.

More than 300 miles to the west, Mr Scale was determined to make no-tillage work on his west Wales farm, as he had seen it work on many farms around the world.

“I’m lazy,” he says. “If a worm can do the job for me then I need to let it, as worms move more soil than any cultivation.”

As well as cutting cultivation costs, he see no-tillage as preventing soil erosion and reducing carbon emissions while saving time and giving him more predictability in his farming.

“Combinable crop plants do not need tillage to grow and thrive. Seeds don’t know if you have spent hours prepping up a seed-bed or not,” he says.

Like Mr Cowell, he is keen to clear straw away and baled before drilling, with an emphasis on getting roots down into the soil as quickly as possible.

He farm 140ha at Great Nash Farm, just south of Haverfordwest in Pembrokeshire.