Even with combines still rolling through fields in what has been a stop-start harvest for many, minds are turning to autumn establishment.

Last year’s dry conditions and the problems it caused getting oilseed rape out of the ground are fresh in the memory.

It was a challenging season, but demand for quality British rapeseed is unrelenting and the associated gross margins remain unrivalled, making it the break crop of choice for a huge number of farms.

And now there’s a new option for weed control from Corteva™ Agriscience which extracts some of the risk from traditional herbicide strategies.

Belkar® is a ground-breaking new herbicide for oilseed rape crops.

Belkar®also contains picloram, known to many arable farmers who use Galera®. 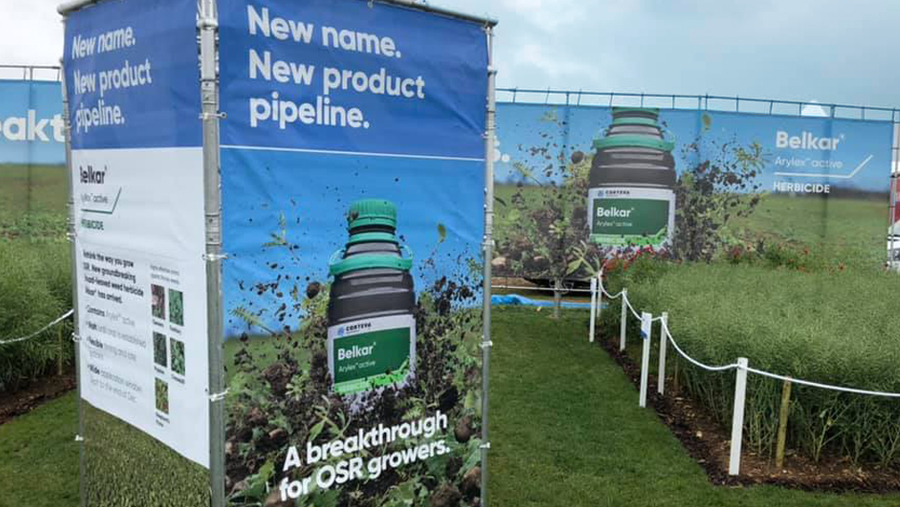 It caused a buzz during its launch at Cereals where scores of growers visited the Corteva stand to learn more about its potential to provide an alternative to pre-emergence chemistry.

What makes it different?

The crucial quality Belkar® has is that it paves the way for growers to switch away from front-loading herbicide investments.

Traditional chemistry has worked best in good seedbeds with plenty of soil moisture – last year’s conditions exposed some the potential for variability of performance.

Target weeds were not visible, meaning herbicides were being sprayed on the assumption they would germinate.

Belkar® is less impacted by conditions such as seedbed quality, soil moisture and overall temperature.

Now growers can wait until the crop is out the ground, giving themselves time to assess the visible weed pressure plus the impact of pests such as cabbage stem flea beetle and slugs.

How do growers get the best results?

There are three treatment options which Corteva says will deliver the best results.

At two true leaves an application at 0.25l/ha will take out the weeds which have germinated alongside the crop and, in some circumstances, that may be enough broad-leaved control before an application of Astrokerb® (propyzamide + aminopyralid) or Kerb® Flo 500 later on.

In high weed pressure situations where there is a further flush of weeds, crops can have a second dose at 0.25l/ha two to four weeks after the first.

A third option is to wait until six true leaves of the crop and all the weeds have emerged and apply 0.5l/ha which will take care of the weeds going in to the autumn.

The spray period for Belkar is from 1 September to the end of December, so plenty of spray day opportunities combined with application strategies to control broad-leaved weeds.

What role will Belkar® play this autumn?

“We know growers don’t like the upfront costs and high risks associated with oilseed rape establishment, yet most weed control is currently centred on investment in residual chemistries to control weeds that may or may not germinate in crops which themselves may or may not establish well due to various pressures.”

“Belkar helps reduce and manage some of those risks because it gives oilseed rape growers the option to switch from high-risk strategies.”

“They can see the crop and assess its potential before deciding on how much to invest in broad-leaved weed herbicides.”