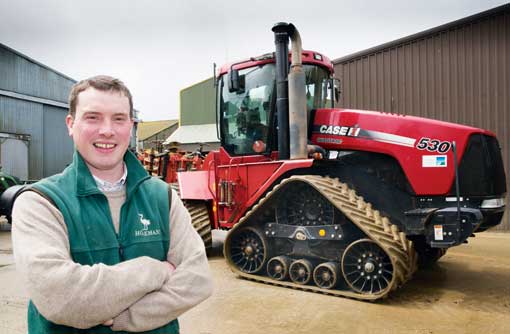 Our new eastern Barometer farmer has set about transforming a farming company, adopting extra horsepower and moving to a six-year rotation. Luke Casswell finds out more

Oliver Scott is the crop production manager at the Holkham Farming Company, part of the Holkham Estate, which spans 10,117ha across Norfolk. The company is a contractor for 2,200ha of in-house farms. Based largely on lighter soils, the farm has moved from a four-course to a six-course rotation this year, growing oilseed rape, winter wheat, sugar beet, spring barley, potatoes and winter barley. There is also a flock of about 100 sheep and a herd of 210, predominantly South Devon cross suckler cows, which graze Holkham nature reserve.

Two years ago the Holkham Farming Company was managing land in north Norfolk with the ethos of using low horsepower to cost-effectively cover a large spread of land. However, it has now added extra horsepower and the benefits are coming thick and fast.

In the space of two years, Holkham Farming Company has become capable of making the most of every opportunity available.

The company, which is part of the historic Holkham Estate, famous for inventing the four-course rotation system, has made the switch from 280hp MF to a 530hp Quadtrac as its prime mover.

Crop production manager Oliver Scott has been with the company for three years following his move from a family farm in West Sussex and has played a big role in the shift to improving cultivation systems within the Farming Company.

“We could never make the most of the windows of opportunity in the extreme weather so we had to make that decision and do something. We sold our 280hp tractor and hired a Quadtrac on an hourly basis,” he explains.

Hiring the machine like this has seen large savings for the Farming Company who takes it on from July to November time. “I only pay for it when the engine is running. When we are unable to move on the land the tractor is parked up and it doesn’t cost anything.

“The biggest benefit of operating these systems is we are able to make the most of the windows of opportunity that have become so sporadic with the more extreme and variable weather we have been getting.

“This also allows us the luxury of not forcing machinery onto the land when it’s wet and risk damaging the soil because we know we have the right systems in place to be on top of the job.”

The average field size of about 15ha allows for a larger machine to work well according to Mr Scott, who highlights although the extra horsepower is not always needed, they are able to get across the land quickly and consistently, using less fuel.

Soil conditions have already improved as a result, benefitting from less compaction. Oliver and his young team also have rarely found themselves behind, even in such a tough season.

The ease of cultivation and having potatoes in the rotation has steered Holkham away from the direct drill and strip till route.

“The Vaderstad carrier will go through early on the stubbles to get an early chit, followed by the Discordon and our Spirit drill.

“As we have got reasonably light land, we can pull our Discordon and nine furrow ploughs fairly cost effectively as well. The Quadtrac and our John Deere 8360 are able to plough using 65-70 litres/hr of diesel at around 10kph.”

Mr Scott notes, the Spirit drill along with the packer on the Discordon leave a good firm seed-bed without the need to roll.

“We were using a similar system before but just couldn’t get the output with a slower speed. We were going at 8kph with the Discordon and using a lot more fuel”

Like every farm, disease and weed pressures are also a cause for concern at Holkham. However, with the aid of t

hree sprayers, Mr Scott feels they are able to stay on top of any problems thrown at them.

“We get a lot of fat hen and dead nettle across the board on the light land. Then there is the yellow and brown rust risk because the two varieties (of wheat) we grow are fairly susceptible.”

Variety choice is influenced by the wild bird shoot on the estate, to minimise the pesticide risk to the birds. For example, orange blossom midge resistant varieties are grown such as Scout.

The wild bird shoot has another interesting knock on effect requiring a full-time vermin controller, very few farms could see as viable.

“There are very few predators about for pests such as rabbits, so they can be a huge problem. His primary job is to control pigeons and rabbits.”

Mr Scott attributes his good oilseed rape crops to the ability to control these pests. “He keeps the pigeons at bay and allows the oilseed rape to get off to a good start” he explains.

Geese have also proved a problem with “goose chasing” a common past time on the coast.

“They can be devastating if they get on a crop. We had a winter barley crop on the coast and the geese came in when it was fully tillered and green, and overnight, they grazed it brown. You continually have to chase them off,” adds Mr Scott.

A new anaerobic digestion plant is set to be built by Egmere Energy on an airfield situated on the estate with 525ha of maize being drilled this year to supply the digester.


The AD plant is different to most, according to Mr Scott, as it is a “gas to grid” plant rather than the more conventional electrical AD plants.

“Gas from the plant is ‘upgraded’ and pressurised then injected into the gas main. This process is far more efficient than the more conventional electricity production” he explains.

“As the farming company we are not involved in the building of the AD plant but are growing approximately 200ha of maize per year on contract which fits in well in our rotation.

In addition to this, we are providing a contracting service to Egmere Energy, this year to establish a further 325ha of maize on land rented by them from local farmers. The area of contracting will increase to more than 500ha per year from 2014.

The plant will use approximately 35,000 tonnes of feedstock per year and produce in the region of 28,000 tonnes of digestate per year which will go back to land to fertilise the following crops. Egmere Energy are looking at different feedstock options including wholecrop rye, Energy Beet, drought tolerant grasses and perennial wildflower mixes to diversify the feedstock production and make the most of the light land in the area.

I’m particularly interested in looking at growing some wholecrop rye going forward. Because of its early harvest, it gives a good entry to oilseed rape and could give us more options in the future.

The birthplace of modern farming

The Holkham Estate is famous for being the birthplace of modern farming with the development of the four-course rotation in the eighteenth century. It went on to be a key driver of the Britain’s agricultural revolution to serve rising demand for food from the growing cities.

The first Earl of Leicester understood that to increase the fertility of Holkham’s land, crops needed to be grown in rotation to ensure nutrients were not depleted. The soil was treated as a vital tool in the production of better and healthier crops.

Fast forward to 2013 and the estate has now progressed from the four-course rotation to a six-year version because of a weed beet issue. “We had to stretch it to accommodate the potatoes, sugar beet and oilseed rape. If we grew them close together on a four-course rotation then we would end up with quite a few problems in the future,” he says.

The change has meant a compromise for this season in order to get the rotation where Mr Scott and his team wanted it. “We’ve not got all the acreage for each crop to where we want it, but we’re getting there. In five or six years time there’s no reason why we can’t have a seven-course rotation,” he says.