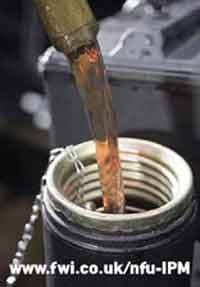 The upward trend in fuel prices is continuing, according to the latest Farmers Weekly/NFU Inputs Price Monitor, with the average price of red diesel up another 1p in October to almost 44p/litre, and further rises forecast.

“With Germany, France and now the USA coming out of recession and showing positive growth, it is anticipated that demand for oil and petroleum products will carry on picking up, and this will impact on red diesel,” said NFU inputs adviser, Hannah Moule.

“But there is also significant regional variation, with reports from several respondents that East Anglia and the south east are bucking the trend and showing a fall in prices.”

Conversely, electricity prices have dropped a little, with a national average cost of 10.83p/kWh at peak times, and 6.56p/kWh off-peak.

The Inputs Price Monitor also reveals that fertiliser costs have stayed level during October, with predicted prices not materialising. Ag-chem prices have also been fairly static, though glyphosate has fallen again, to £3.60/litre.

Coming into the winter feeding months there has been a better response from livestock farmers taking part in the survey and reporting feed costs, though as would be expected, there is wide variation due to different ration formulation.

“In general, a range of around £160-£180/t for lamb and sheep feeds was reported, which is within expectations, while dairy rations showed a range of £170-£190/t for standard formulations,” said Miss Moule.

“Although wheat and soya prices are expected to stabilise, a predicted surplus of manufacturing capacity in the ruminant sector will play into farmers’ hands when negotiating livestock feed deals this winter.”