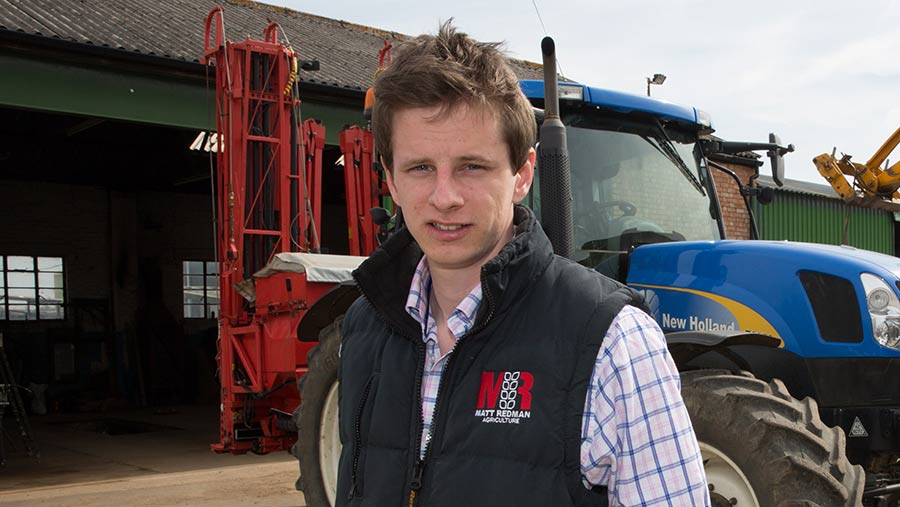 With March nearly here, we don’t have long to wait for some lighter evenings, and the organised chaos of spring.

Hopefully they stop naming storms so the wind drops and rain stops and we can get at least some spraying done on an alternative day to Sunday.

The oilseed rape has received its first pass with the sprayer to apply a fungicide for light leaf spot, and now that we have had a bit of cold weather, pigeons have suddenly appeared and started causing damage in fields where the rapeseed plants were smaller.

I wonder how effective pigeon grazing is as a treatment for oilseed rape leaf disease?

Some of the direct-drilled wheat has now received 40kg/ha of nitrogen to give it a kickstart. These crops look well, but with a combination of end-of-October drilling and no cultivations to mineralise some nitrogen they are slightly behind conventionally drilled crops.

The sprayer travelled well and the wheels stayed clean on the direct drilled fields, whereas travelling on fields that had been cultivated was definitely not an option.

The new John Deere 750a drill has arrived and is ready to go. Being a 6m, the increased output and the need for half the number of turns (and half the wheelings) will be a welcome improvement over the old 3m, as is the ability to do variable-rate seeding.

I have made a few small alterations to it, such as fitting Gutler closing wheels in place of the standard ones, and changing the rear following harrow tines from straight ones, to some S-type ones that I have found are better suited to the job.

This month I have started looking for farms to let on farm business tenancies in the coming year – as always they are few and far between, and of varying quality.

A good dose of optimism is required when looking at these farms and working out a business plan within the current industry climate. You also need the ability to walk away from the idea if the spreadsheet doesn’t work with realistic figures.

If you happen to be thinking about renting your farm this year, or contracting the work out, I know someone who would definitely be interested, so get in touch.