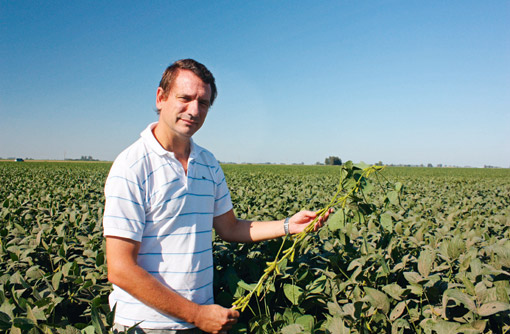 After the extreme spells of weather seen this year – drought followed by deluge, the soya bean harvest kicked off with ideal weather. Having said that, further south, growers had 230mm of rain to contend with in their first soya harvesting days.

I started harvesting the first 100ha of first crop soya beans (planted in early November last year) expecting a yield of 3t/ha. But to my surprise (and delight), the crop came off at 4.5t/ha, 30% more than expected.

Obviously, the first soya bean crops recovered well with the rains which came at the end of February, after a period of more than two months of drought during the summer.

While the soya bean harvest is still in its early stages (only 20% of the total), I anticipate it will now average 4-4.5t/ha, considering the good development of plants, number of pods and seed weight.

One positive of this season is that there was not much disease pressure with little evidence of Cercospora sojina (frogeye leaf spot) and Cercospora kikuchii (purple seed stain), which are usually present every year and affect potential yields. Obviously the very dry summer helped in reducing the pressure, thus avoiding the high cost of a robust fungicide programme.

Finally, regarding wheat for next season (to be drilled in June), I have not yet finalised my cropping plans. Looking at the future prices as indicators of net margins and viability, and the impact of marketing restrictions by the government; I am unsure that I will plant any wheat this year.

Our export markets are closed and so the local government influenced market drives the price down well below the impact of the export retention tax. I may earn more by not sowing wheat in June, perhaps rather like some of the choices facing your sugar beet farmers.