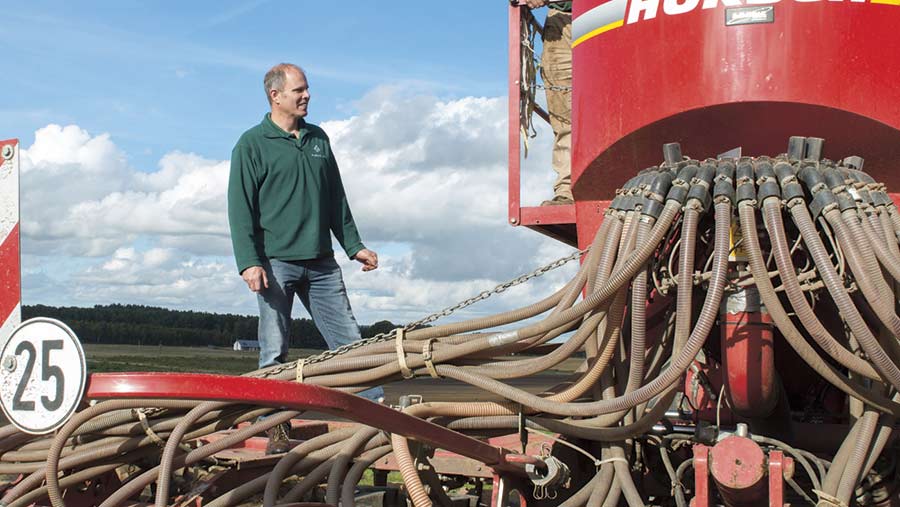 The dry weather in Aberdeenshire has continued throughout April, with the annual total to date amounting to only 33% of average. This allowed spring barley drilling to start early on 20 March – early for us – and with a great effort by the whole team we were able to drill 808ha in 23 days.

Now that the crop is established, we desperately need some decent rainfall. We had 6mm last night, and a few showers are forecast later in the week, but really we could do with an inch or so over a few days.

While the spring barley still has some moisture at seed depth and has not yet been impacted by the dry conditions, the wheat is certainly suffering. When a plant is pulled up, the soil just falls off the roots and any damper parts of the field show how pale and thin the majority of the crop is.

With the 2018 drought still fresh in my mind, I have held back some nitrogen for now on both the wheat and spring barley. The rainfall over the next 10 days will determine how much, if any, of this will be applied.

It has been a strange spell with lockdown for coronavirus.  During drilling, we were lucky to be relatively unaffected, being able to get on with our jobs with only minor changes to working practices.

One of these was that I often took my bike when moving the loader and seed trailer. Cycling back really showed up how bad many of our road surfaces are and also, despite the reduced amount of traffic, how many bottles and other rubbish is being thrown into the verges. If only some of the many extra walkers out and about would pick some of it up!

During this time it is also frustrating to see some supermarkets importing beef, particularly steaks, when local processors need to find new markets for these cuts. Is this a failure of the supply chain, or an excuse to drive the price down? Either way it is not helping the UK beef sector and drives farmer mistrust of retailers.