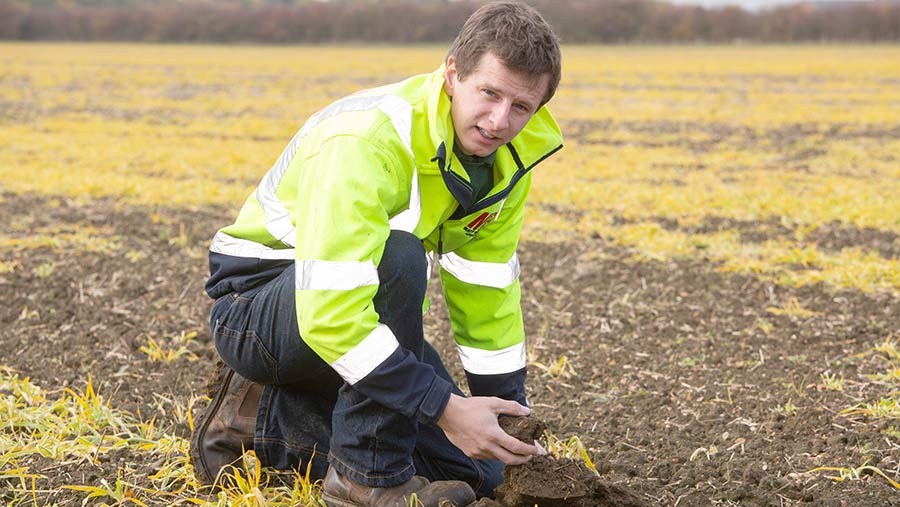 I may have been overly confident last month when I questioned if I should be braver with my delayed drilling.

The “magic” 15 October start date didn’t arrive before rain – lots of rain – and so at the time of writing at the end of October I still haven’t done much.

The positive in that is blackgrass has emerged well, and there’s now plenty of moisture to help pre-ems work.

I’ve managed to avoid talking about Brexit too much so far, but with yet another delay and the constant unknowns being moved into next year I’m getting a bit fed up with it.

No matter what happens it will have an impact in one way or another on farming – most likely a negative one in the short-term at least. But without knowing how and when, I feel there is very little we can do to prepare ourselves.

The wet weather is at least providing some time to start work on the capital items of my mid-tier stewardship scheme.

Over the winter I’ve got a bunded and covered sprayer filling area with a biofilter to build, ready for next spring, along with installing a bunded concrete pad for liquid fertiliser tanks and a new chemical store.

I’m looking forward to it being completed as it will transform my spraying operation, making it easier, more efficient and safer.

The wild bird seed mixes established as part of the mid-tier scheme now look fantastic – it was very dry when most of them were established so I re-drilled some a month later.

In hindsight this was not required, as what hadn’t germinated then did eventually.

It has resulted in two stages of flowering and some later seed setting, which means they have kept looking bright and colourful for a long time.

They are already bursting with small birds and doing exactly what they were put in to do.

With their mix of autumn colours they are also providing a much needed break from the stubble and undrilled fields when looking around the farm.

While it is wet and proving difficult to get, or keep, drills moving, we have been very lucky in this area with the amount of rainfall we have had.

Thoughts must go to those further afield who have experienced huge amounts of rainfall and flooding and are in a far more difficult position.