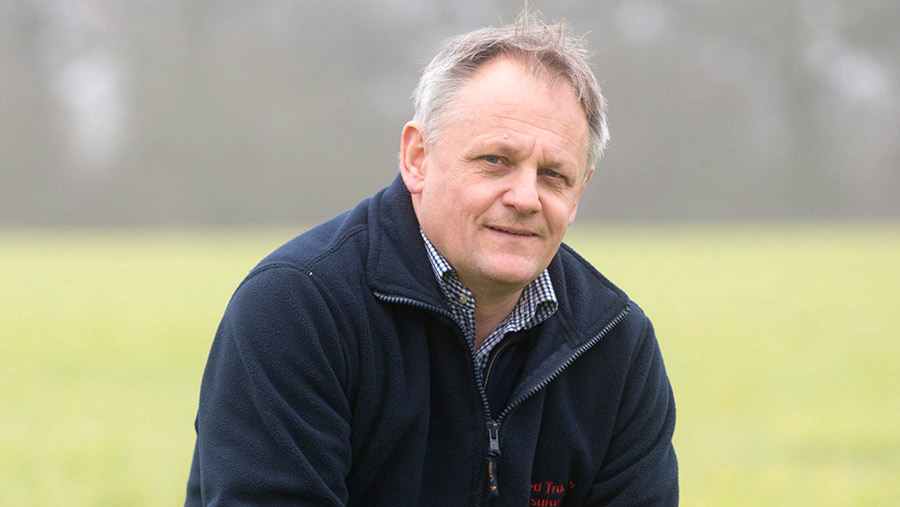 The past month has seen an absolutely amazing spell of weather, blazing heat and not a drop of rain.

Of course these conditions are not at all good for our unirrigated cereal crops or grassland. Drought-ridden Breckland swales have appeared in the majority of the cereals.

These characteristic striped patterns in the soil are a result of glacial drift from the last Ice Age that left a cover of alternating acid sands and alkaline chalk near to the surface.

See also: How a Hampshire farmer is managing contrasting soils

Try as you might, the fingerprint still shows through. Thankfully,. the majority of our farmer group visits had finished by the time the worst effects showed up – when the crop dies in the dry swale and stays green in the section with a little bit of moisture left at depth.

It’s not all bad, of course, the effect is really useful to demonstrate to all of the school children and members of the general public who visit us as the summer progresses the variability of soil on such a grand scale.

It does pose a significant question about what to do with the variability of the crop in the combine tank. There will certainly be many pretty patterns on the combine yield maps this season.

With potatoes and carrots now starting to leave the farm, the Euston 10-month harvesting window has opened.

The arrival of the new Claas combine has shifted the focus to what it can deliver. Our excitement has only been tempered by having to clean the grain stores, but now that is done, we are ready to go.

It was really great to get away to a farming wedding in Cumbria and see some grass with a bit of colour for a change.

It was equally good to catch up with good pals from Harper Adams, some 30-plus years after we left. Nothing changes – it just takes a bit longer to recover from an excess of anything these days!