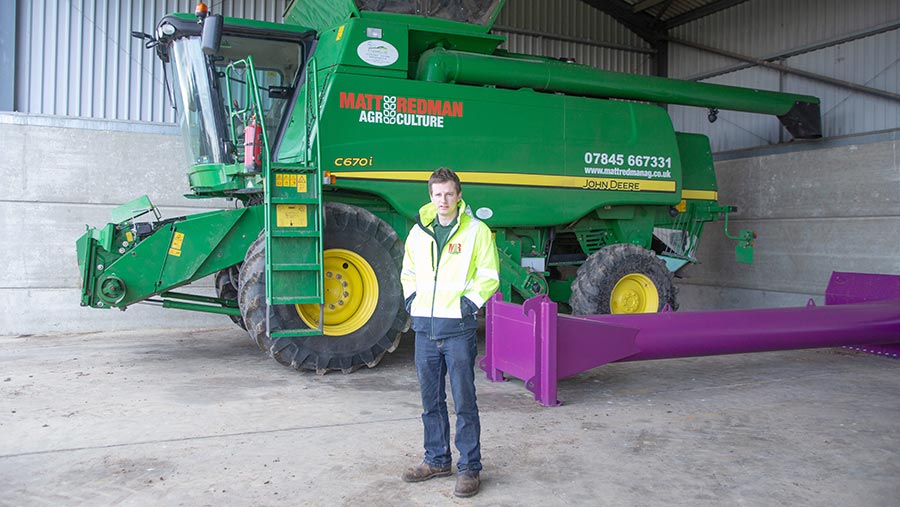 Matt with his combine harvester

Harvest is proving to be very stop-start. It started very well, but unreliable weather reports and very localised heavy showers whenever the wheat is almost dry have slowed progress.

While it is frustrating, hopefully by the time you read this the bulk of it will have been completed.

Unfortunately, harvest hasn’t been without its mechanical issues either, with a fairly major breakdown at 5pm on a Friday evening, 10 minutes into the first field of wheat.

It was probably my own fault for tempting fate and starting then.

Big thanks has to go to Tom and Richard from P Tuckwells for getting us up and running again within 48 hours.

On a positive note, where as I normally wish the horrible wet, heavy clay patch in the field wasn’t there, this year I have been wishing the whole field was like it.

This harvest I have started trying to implement a semi-controlled farm traffic system.

Tramlines last year were all marked out with the RTK on the sprayer at 36m and will stay in the same place permanently.

Harvest traffic has been kept to these as much as possible, the combine has been run at 7.2m to fit into 36m and trailers loaded facing the gate, or on the headland.

In the long term I hope to move to a 9/36m system, but in the short term I’m very pleased with the positives already evident from simply managing the traffic, sharing A-B lines and making things fit as best they can.

Interestingly, despite the cabbage stem flea beetle pressure on oilseed rape, we have contract drilled just as much, if not more than in the past couple of years, with a roughly 50/50 split between the John Deere 750a and the Dale drill.

Personally, I have also gambled and drilled some, choosing the Dale option with diammonium phosphate (DAP) fertiliser placed with the drill, and berseem clover, phacelia and buckwheat in the mix with Campus oilseed rape.

I’m obviously hoping the OSR is successful, but if not it should be a reasonable cover crop ahead of late winter beans, or a spring crop.

Matt Redman operates a contracting business specialising in spraying, Avadex application and direct drilling in Bedfordshire. He also grows cereals on tenancy land and was 2014 Farm Sprayer Operator of the Year.