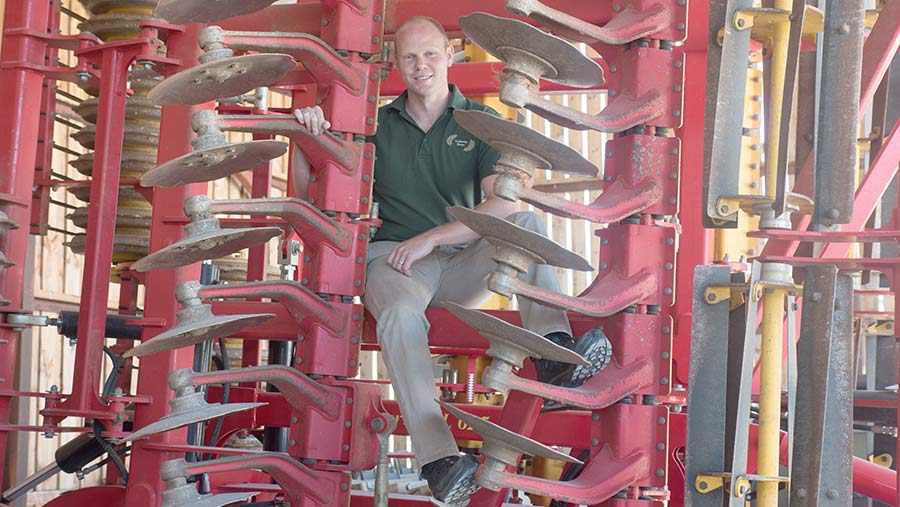 It felt like a mini milestone at Lockerley over the past week as we planted some clover/grass leys in our arable rotation and spread home-produced manure in front of a cover crop.

If I spoke with my uncle in Kintyre about this new idea of putting down grass leys and spreading manure, he would ask what the fuss is about.

As I walk the oilseed rape drilled in mid-August, following 48mm of rain, it felt all too much like last year.

We have scaled our OSR acreage back to just one-quarter of what was in the ground when I started here four years ago. However, I’m beginning to wish I was braver and planted none.

Looking at crops with expanded cotyledons and three true leaves being eaten alive is incredibly frustrating.

We waited for moisture, we consolidated the ground, applied no pre-emergence herbicide and added di-ammonium phosphate to the seed-bed. It all hinges on whether you catch the rain clouds or not, and that’s gambling – not farming.

Cultivations are up to date and more than 200ha of cover crops are drilled. Farmyard manure, fibrophos, biosolids and lime are all spread accordingly and compost is soon to be imported.

It feels as if we have bought shares in KWS this year, with Firefly, Extase and Siskin being delivered/cleaned, ready for planting.

Pre-emergence herbicides are also in store, ready for cereal drilling, as is two rounds of insecticide. I have also revised my T-Sum scores for barley yellow dwarf virus risk in preparation.

We took delivery of our new Vaderstad Rapid drill late in August, and it arrived in time to plant the last of the cover crops direct into some stubbles.

Fewer, yet larger, front discs, no levelling boards and coulters spaced over three rows – as opposed to the traditional two – allow trash/debris to flow far better and has increased the flexibility in our cultivations system to do even less where appropriate.

We recently completed a survey of six random fields on the estate with the Hampshire Wildlife Trust and Plantlife, and we were pleased to learn we have three plants of both county and national importance.

The combined score makes the estate of national importance for arable flora and something we must protect under our watch.

In just one of our Countryside Stewardship-cultivated arable margins, we surveyed 54 different species of arable plant. So, it’s great to deliver what we are being paid for via the stewardship scheme.