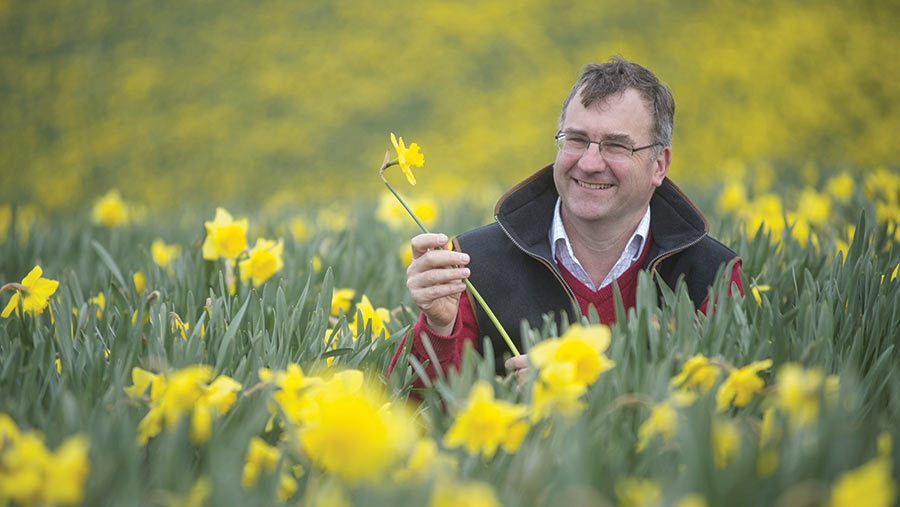 There is an air of eager anticipation in this part of Cornwall as we await the arrival of some spring-like conditions.
January has been a dire month, with the continuing wet weather making life difficult.

The sheep grazing the stubble turnips have required moving all too frequently. Each one has “five mouths” this year – trampling in more than they are eating – which is not helpful when we are faced with crops that are decidedly average following the difficult autumn of 2017.

I do, however, console myself by thinking of the manure benefit of the “golden hoof”, something we have certainly seen since adopting the practice.

Our first daffodil flower pickers have arrived and settled in. They are making a steady start on the crop, although a blast of winter last week has slowed things somewhat.

The initial impression is that the number of flowers from a given area is down this year. The precise reason why is not known, at least to me.

It could be due to weather or some other physiological effect over the past twelve months.

Whether we will pick the necessary numbers this year remains to be seen, but there is a long way to go yet.

The other factor that will determine the success of the season is the availability of labour. It has definitely proved harder to get the number of pickers required this year.

Managing the harvest peaks is certainly going to be interesting. This isn’t something we can mechanise or where we can replace people with robots.

Over the past year or two we have tinkered around the edges, increasing the rate at which we plant the bulbs in order to gain more stems a metre run to improve picking efficiency, but it doesn’t change the fundamental issue.

Otherwise we have been busy alternating between grading out the ambient stored potatoes and emptying the last onion store and hauling product to the peeling plant.

To take up the space vacated by onions we have been busy taking delivery of potato seed and boxing it up. Roll on spring.