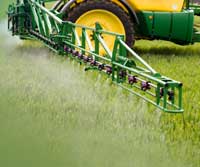 Farmers have been told they cannot be trusted after a banned herbicide was found in watercourses across the country.

Isoproturon has been banned since 30 June 2009, but analysis from Catchment Sensitive Farming and Voluntary Initiative-monitored areas showed it was still being used last autumn.

The findings have cast doubt over the industry’s voluntary approach to cutting pesticide pollution.

“There have been big peaks in IPU levels at the time of use across the country,” said Nick Humphrey of the Voluntary Initiative.

“It’s everywhere, from Herefordshire, through the midlands to East Anglia, Yorkshire and Aberdeenshire.”

Data from previous research proved the traces were from recent applications and not the release of chemicals locked-up in the soil from previous years, he said.

“IPU levels peak following rainfall at times of use, but where there are high levels of rainfall in the summer, there are no traces of IPU.

“So the peaks this autumn relate to product that was applied around that time.”

While it was disappointing, it was not surprising the chemical had been detected, he added.

“People were obviously using up product that they had left as it was very expensive to dispose of – hopefully they will stop using it soon, because it shows the industry can’t be trusted.”

Levels of chlorotoluron, which growers had turned to since the withdrawal of IPU, had also risen to high levels in some areas, he said.

“We were hoping to see peaks of IPU disappearing and not being replaced with peaks of CTU.”

“It lets the whole industry down when people break the law,” he said.

“It’s a shame we can’t accurately trace where this contamination came from – I want to see those breaking the law prosecuted.”

“If this does indicate the product has been used past the end date it is very disappointing,” she said. “As this was a regulatory control that was put in place it calls into question our commitment to putting voluntary measures in place.”

The industry needed to get its act together, act responsibly and prove that voluntary measures could work, she added. “What we don’t want is yet more regulation.”


Can farmers be trusted to keep IPU out of water? Have your say on our forums